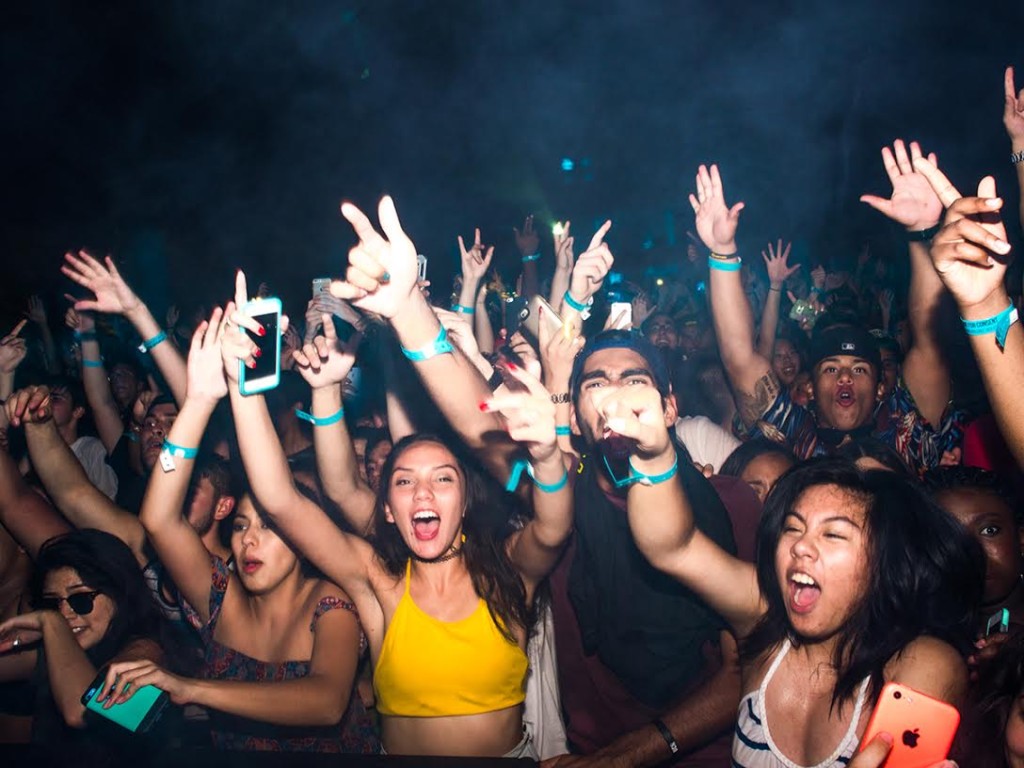 The sun was shining and the energy was pumping as students made their way toward this year’s Block Party. Food tents were scattered around the middle of campus, and served everything from boba to bacon waffle cheeseburgers. The lineup did not disappoint either, as electronic groups Neon Indian and GTA dominated one half of the concert’s musical sphere, and the other by hip hop artists Sage the Gemini and Jeremih. And in the spirit of last year’s Block Party, the event was anything but disappointing. 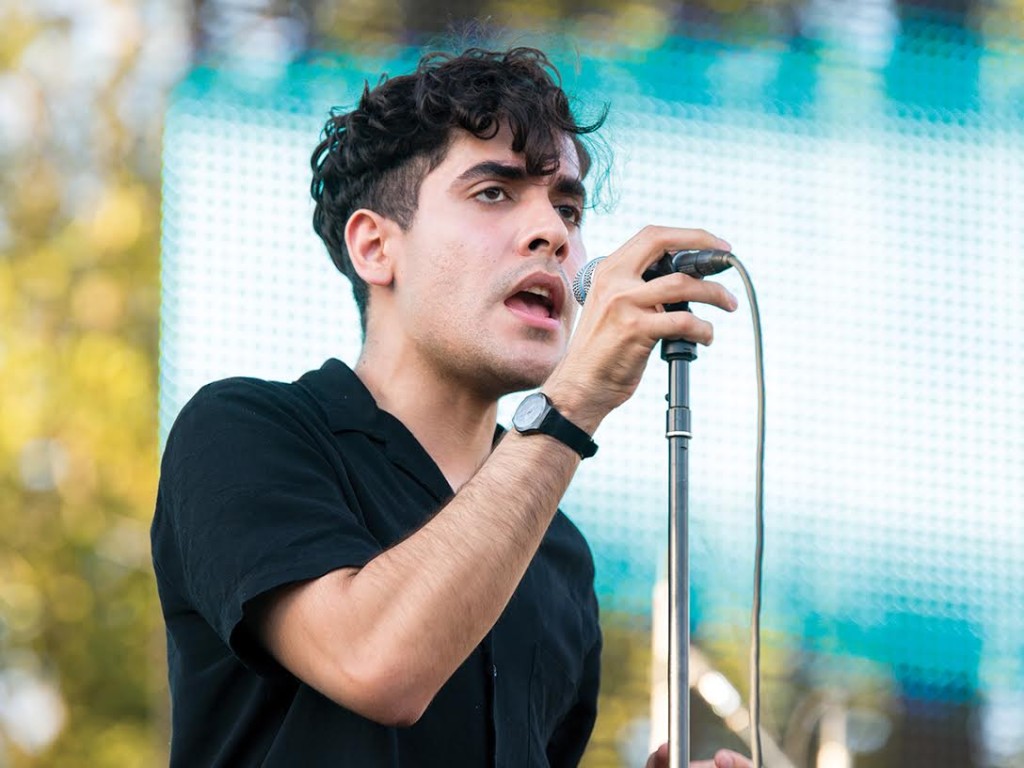 The general Block Party crowd was still gathering when Neon Indian first took the stage at 5:30 p.m. An electronic music group from Denton, Texas, Neon Indian owes much of its sound to the electronic-heavy dance music of the ‘80s. The band’s lead singer Alan Palomo even danced onstage like the frontman of an ‘80s new wave band, with tight hip swivels and Michael Jackson-esq leg kicks. The band kicked off the concert with “Deadbeat Summer,” a song written like an ode to upbeat, ‘80s electronic pop. Palomo and his band seemed to be enjoying their sound more than the crowd; Palomo himself couldn’t stop dancing almost every time he pulled away from his mic and keyboard.

Following this were a few of their glam-rock influenced hits, which got the still-growing crowd to finally begin moving with their sound. “Hex Girlfriend” featured heavy keyboard work by Palomo, as well as keyboardist Ed Priesner and guitarist Josh McWhirter. Palomo did his little dances as he crooned “Does it make you, does it make you feel alright? / Did they make you, did they make you feel alright?” “Slumlord,” one of their newest singles, felt much more influenced by disco and contemporary electronic groups like Daft Punk, and that really got the crowd going. “Annie” was another new song released this year, and Palomo had the crowd hold their hands up high and slowly wave them back and forth, as though we were uniting for a slow, ‘80s love ballad, and it certainly felt like one, as Palomo sadly sang “Annie, don’t run away / Where I can’t find you / The game has gone too far.”

They ended their set with one of their most popular songs, “Polish Girl.” A poptastic piece of electronic music that included a variety of sounds from mixers and launchpads, it really got the crowd moving, as all head bobs quickly turned into unified jumps and cheers. It looked like the band had the most fun with this song, as their guitarist and keyboardist were messing with their keyboards and Palomo utilizing his own electronic equipment when he wasn’t singing or dancing. It was a great, sweaty, energy-filled ending to the first performers of Block Party, and was just a sample of what was yet to come. 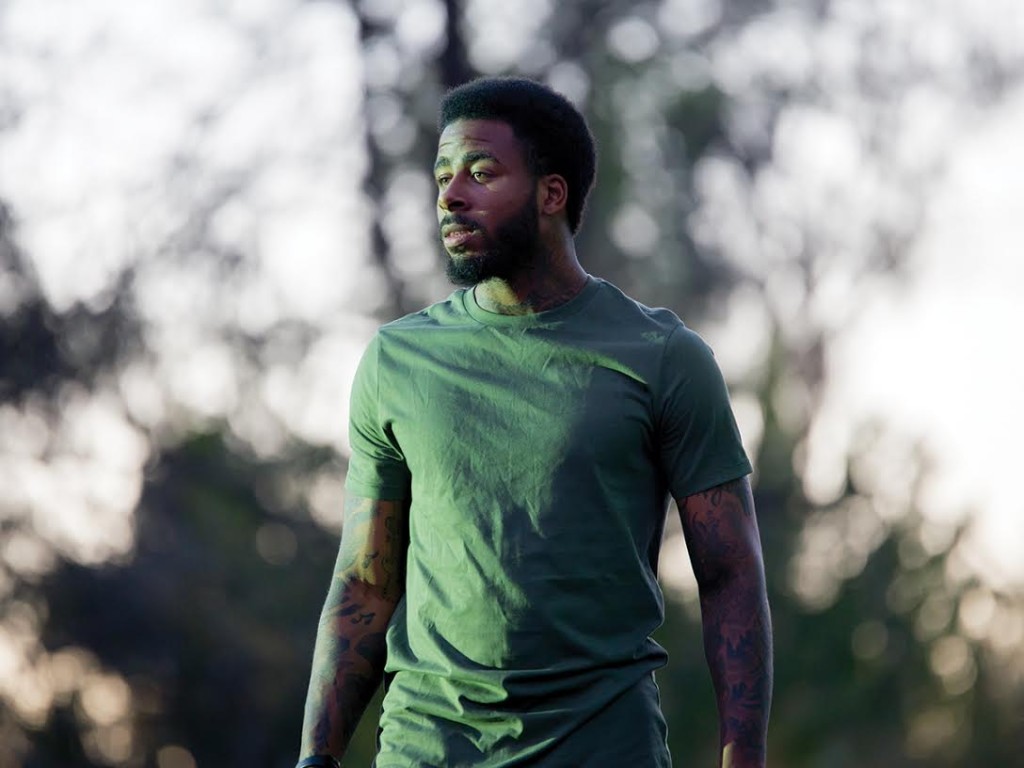 Sage the Gemini: You already know me, S-A-G-E

Next to hit the stage was 23-year-old rapper Dominic Woods, also known as Sage The Gemini. Known for his party hits “Gas Pedal” and “Red Nose,” Sage took to the stage in a plain, green shirt and shades while the crowd shouted their approval. The Fairfield native started his set off with fellow rapper Flo Rida’s hit song “Goin Down For Real,” in which he features. The song was a good indicator of what was to come: pop-infused hip hop perfect for any college music festival. Sage continued by speaking to the crowd and getting onlookers even more pumped for what was to come. “We came all the way from the bay area to be with y’all,” he shouted, before performing his infectious new song “Guantanamera” and inducing screams and cheers from the audience.

Sage utilized the entire stage, moving from one side to the next in order to interact with as much of the audience as he could. He told everyone to throw their middle fingers in the air while performing “Swerve,” an ode to all of his haters and gave a shout out to everyone in college regardless of their circumstance. “Say momma we made it!” he instructed the energetic crowd.

“2AM,” the hit song by Adrian Marcel featuring Sage, really got everyone moving and there wasn’t a stiff body to be seen. He asked where all the single ladies were before removing his shirt and creating a frenzied reaction within the audience. Sage kept the energy going with “Panorama,” a track that got everyone on the grassy field mimicking the dance that accompanies the hit song. Feeding off his appeal with all of the women in attendance, Sage asked where his baby momma’s were, once again garnering an ecstatic reaction from the crowd.

Smoke rose from the stage and into the crowd while he continued his set with “Red Nose.” Sage concluded his set with “Gas Pedal,” the song that really put the talented rapper on the map. Before exiting the stage, he had a mini dance party with his crew while his DJ spun a few tracks and kept the crowd moving. The cheers didn’t stop until Sage was completely off the stage and goes to show that he successfully put on an electrifying performance. 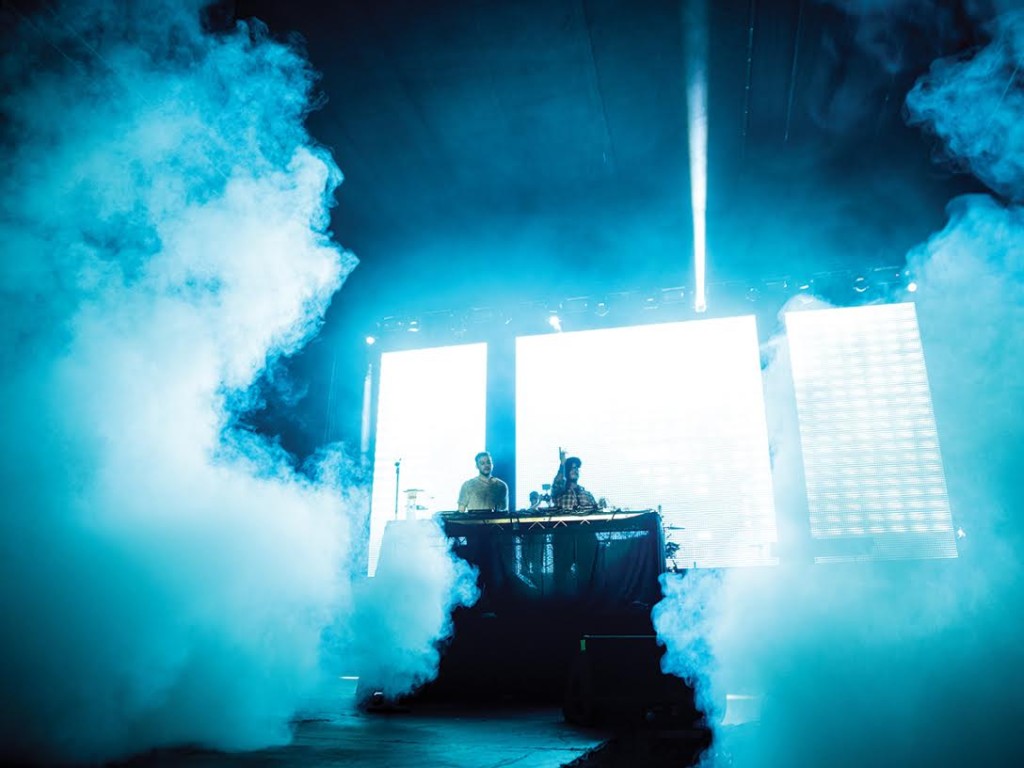 Ostensibly named after the popular video game series “Grand Theft Auto,” but actually an acronym for “Good Times Ahead” one wouldn’t be too far out in left field to associate DJ duo Julio Mejia and Matt Van Toth’s set at Block Party with the energy and mayhem that takes place in the world of Grand Theft Auto.

Taking the stage just moments after Sage The Gemini’s performance, GTA’s set brought a change of pace from the head-bobbing hip-hop to the fist-pumping, jump-inducing sounds of the hard-hitting EDM that took over a sound system that had gone somewhat quiet with the arrival of nightfall.

The energy level remained at a steady peak throughout the entire set, as the duo kept the crowd jumping and moving not only with the music, but Mejia’s intermittent words of encouragement to the crowd — which included your typical, borderline excessive, expletive-laden DJ one-liners to pump up the crowd such as “everybody fucking jump!” or, “one, two, three jump!”

The duo’s set hit a climax at first mention of the ominous sounds of one of their most prominent tracks, “Prison Riot,” a collaboration with trap duo Flosstradamus and rapper Lil Jon. As the buildup played out, open circles began to form along the crowd until the drop, in which the ensuing chaos created the likes of stampedes of bodies flying into and pushing each other around — a mosh pit that rivaled the fervor and intensity of Flosstradamus’ Spring Splash set last May.

Throughout their set, GTA also curated hits from other artists, such as Galantis’ “Runaway (U & I), Rl Grime’s “Core” and the Trollphace Remix of Dillon Francis & DJ Snake’s smash hit, “Get Low.” These selections added another dimension to the set, keeping the energy high as the crowd reacted favorably to hearing the familiar, popular tracks that shaped their summer.

As the allotted one-hour timeslot for GTA drew to a close, Van Toth and Mejia ended their set just as they began it: keeping the energy high with the hard-hitting, bass-heavy Skrillex remix of GTA’s “Red Lips” and the minimalistic, big-room sound of Gregor Salto and Wiwek’s “On Your Mark,” putting a huge exclamation mark on a performance that could have provided Riverside a decade’s worth of electricity. 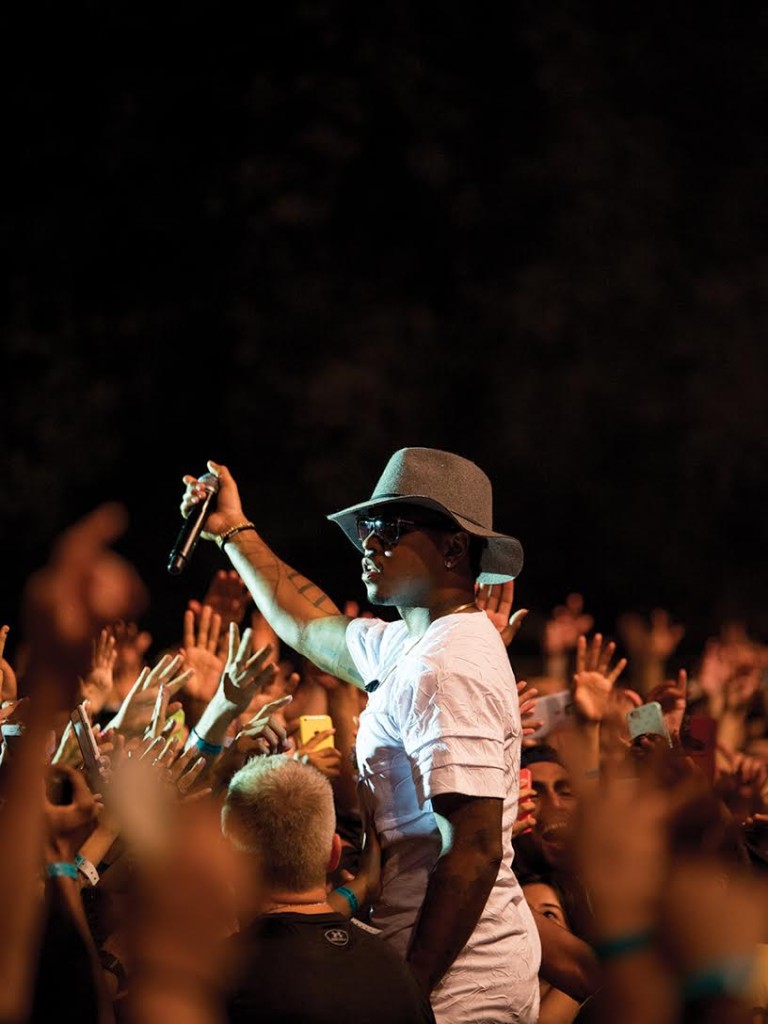 Jeremih: high conclusion to the night

Finishing off Block Party’s exhilarating performances was headliner Jeremih. Clad in a green hat, white shirt and shades, the R-and-B crooner started his set off with the 2010 hit, “Down On Me” which peaked at number four on the Billboard Hot 100 when it first premiered. Based on the energetic screams and movement, it was obvious that attendees were familiar with the dance-worthy track. Jeremih’s emotive yet subtle vocals were particularly evident on his slower songs, including the hit “Birthday Sex,” which garnered an ecstatic reaction from the crowd as soon as the music began. The singer also performed one of the first songs that put him on the map, “Imma Star.”

Despite being relatively good at performing his slower tracks, the audience grew a bit restless as he continued to perform downtempo songs from several years ago. “I’ma take y’all way back,” the singer exclaimed, much to the apparent chagrin of the crowd. “What is this?” I heard a girl murmur as Jeremih obliviously continued to perform tracks that were killing the party vibe that, until now, had been consistent throughout the evening.

As an artist most popular for his hit songs rather than his entire catalogue of music, it wasn’t surprising that concertgoers were less enthusiastic about the majority of his set. Things also took an interesting turn when he brought out the relatively unknown artist Sayyi to perform his song, “Fvkarnd,” pronounced “fuck around,” in which Jeremih also features.

Jeremih felt the deterioration of enthusiasm within the crowd as he got closer to the end of his set, because he made sure to perform the popular DJ Khaled track, “Hold You Down,” that he also features in. He attempted to keep the momentum going by interacting with the audience. “Where are all my freshmen at?” he screamed, preparing the crowd for one his most popular songs, “Don’t Tell Em.” The track got everyone moving and allowed Jeremih to end his set on a strong note.