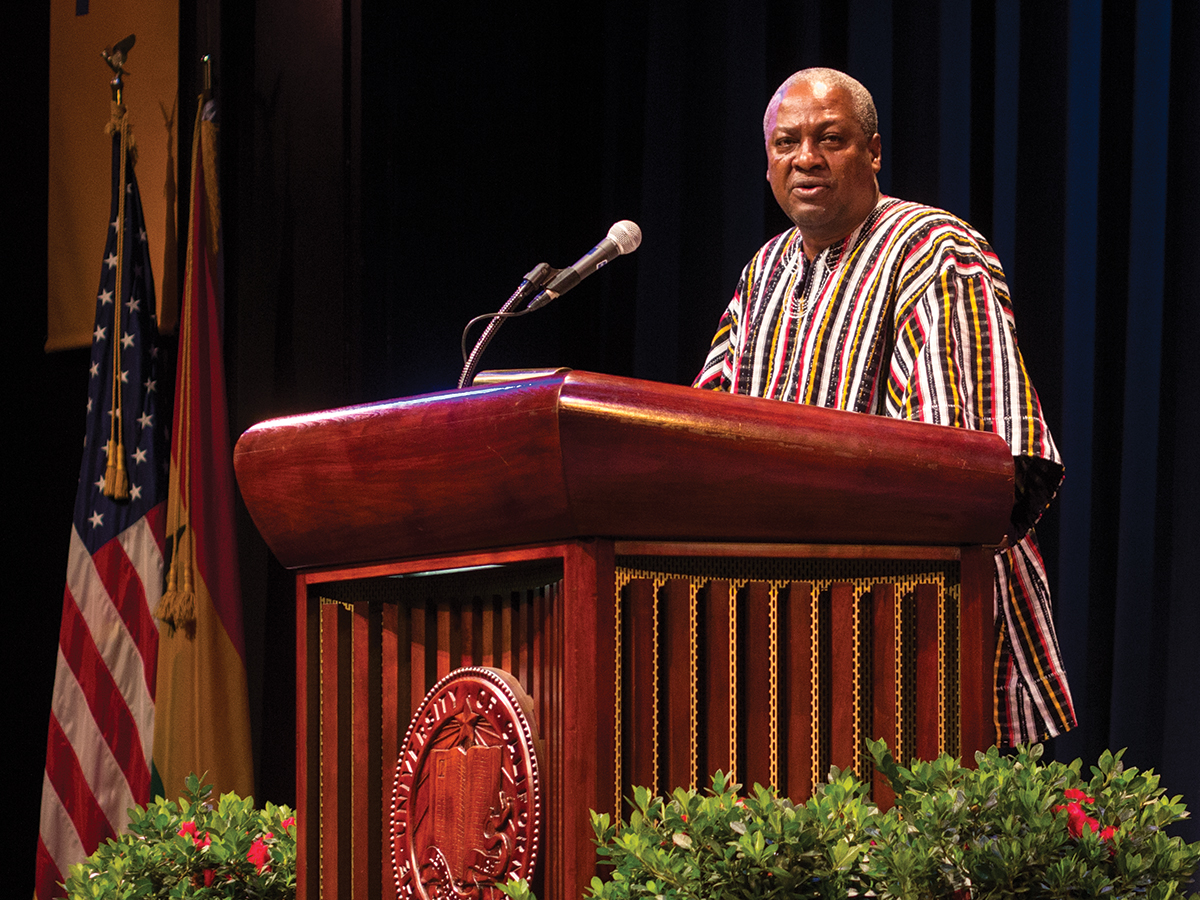 The President of Ghana, John Dramani Mahama, gave a lecture regarding the African diaspora in the University Theater, which was filled to its capacity with over 300 people. The lecture, titled “The African Diaspora: Possibilities and Privileges of Empowerment in this Technological Age,” was hosted by African Student Programs.

Prior to his position as president, Mahama served as a member of the Ghanaian parliament from 1997-2009, minister of communications from 1998-2001 and vice president of Ghana from 2009-2012. Upon the death of former President John Atta Mills in 2012, Mahama assumed the presidency and was formally elected as president in December of that year.

UCR Undergraduate Cultural Ambassador Ama Serwaa and Vice President of Campus Internal Affairs Michael Ervin opened the lecture with the national anthems of Ghana and the United States respectively. After the anthems, Chancellor Kim Wilcox introduced the president and his entourage, which included the Minister of Education Jane Naana Opoku Agyemang, who will be working with Vice Provost Paul D’Anieri to create partnerships with Ghanaian universities and UCR.

The president then proceeded to speak on issues such as the recent death of Sandra Bland, and stereotypes amongst those of African descent, which exist due to cultural ignorance created by the displacement of the African people across the world. According to Mahama, while many in the diaspora are separated by distance, technology assists in uniting those of African descent.

Mahama credited advances in technology and the advent of social media for allowing many Africans to be informed of events affecting them across the world in the diaspora. “If it wasn’t for technology that we have today, those of us who live on the other side of the globe … we would never know of the frustrations and concerns of the Africans in the diaspora,” Mahama stated.

While crediting social media for providing greater exposure to these issues, Mahama expressed concerns about how mainstream news can portray stereotypes. “Mainstream news outlets provide information that is not so much inaccurate as it is incomplete. It is not the whole picture … Just look at images that are displayed of Africa and the misinformation it projects,” Mahama explained.

Toward the end of the lecture, Mahama described how earlier technology divided many Africans as they were colonized by European nations. Mahama explained how phone calls, for example, had to be routed back to European countries first to communicate with another country that bordered Ghana.

With the advent of the web however, Mahama stated that “Now we’re able to overcome those divisions, and we should be mindful of that. We should use technology as a tool for empowerment.”

After the lecture, a Q-and-A was held between audience members and the president. Belinda Addo, a student at Cal State Dominguez Hills, asked “What is Ghana doing to try to encourage young Ghanaians like myself … to move the country forward?”

Mahama explained that the world financial recession which began in 2008 led to a large amount of Africans to return to the continent. In order to encourage Africans to come to Ghana, the country passed a right of abode law, which allows anyone of African descent to seek citizenship in Ghana.

Ashley Reyes, a first-year English major who attended the lecture out of curiosity, had a warm reception for the president. “You can tell that he had the best interest of his people at heart … and I respect politicians that put their people first and you don’t see that now in a lot of countries,” Reyes stated.