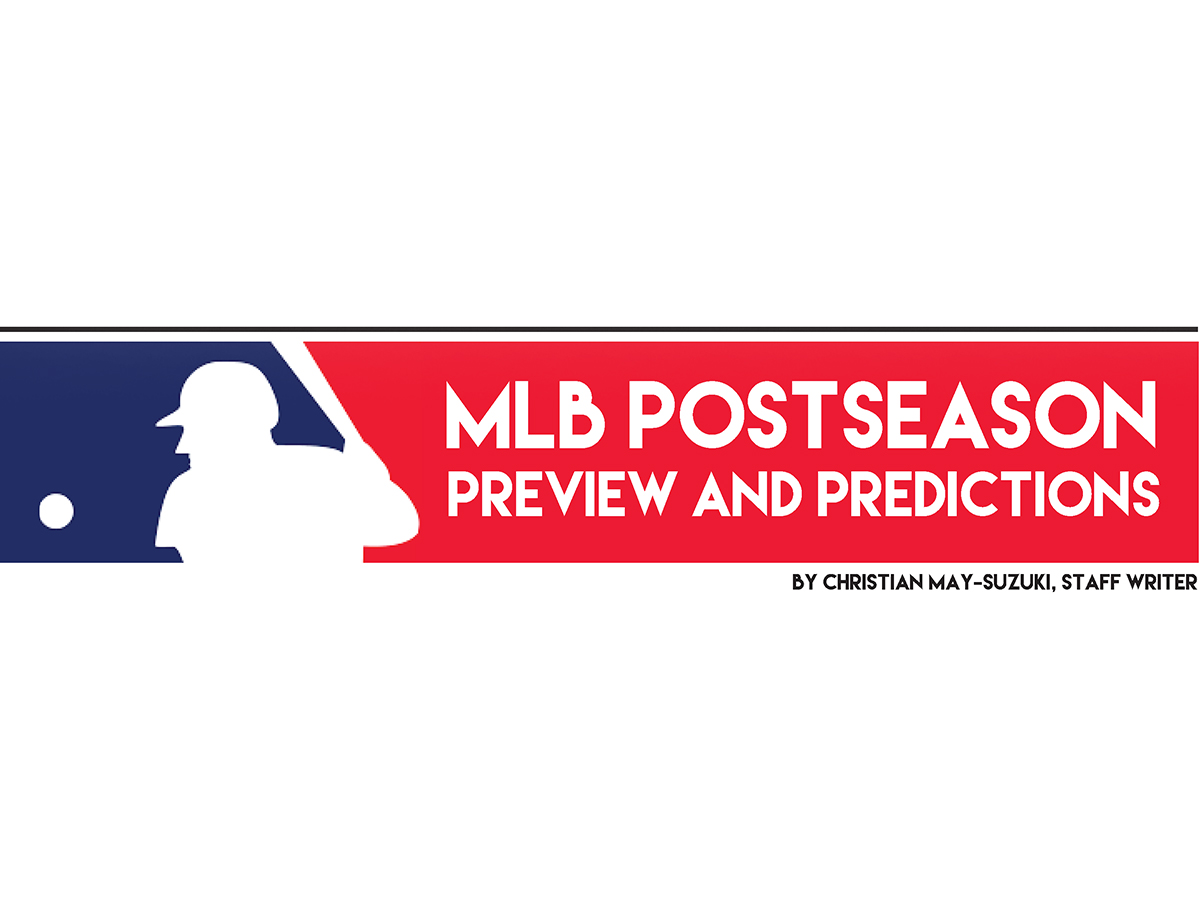 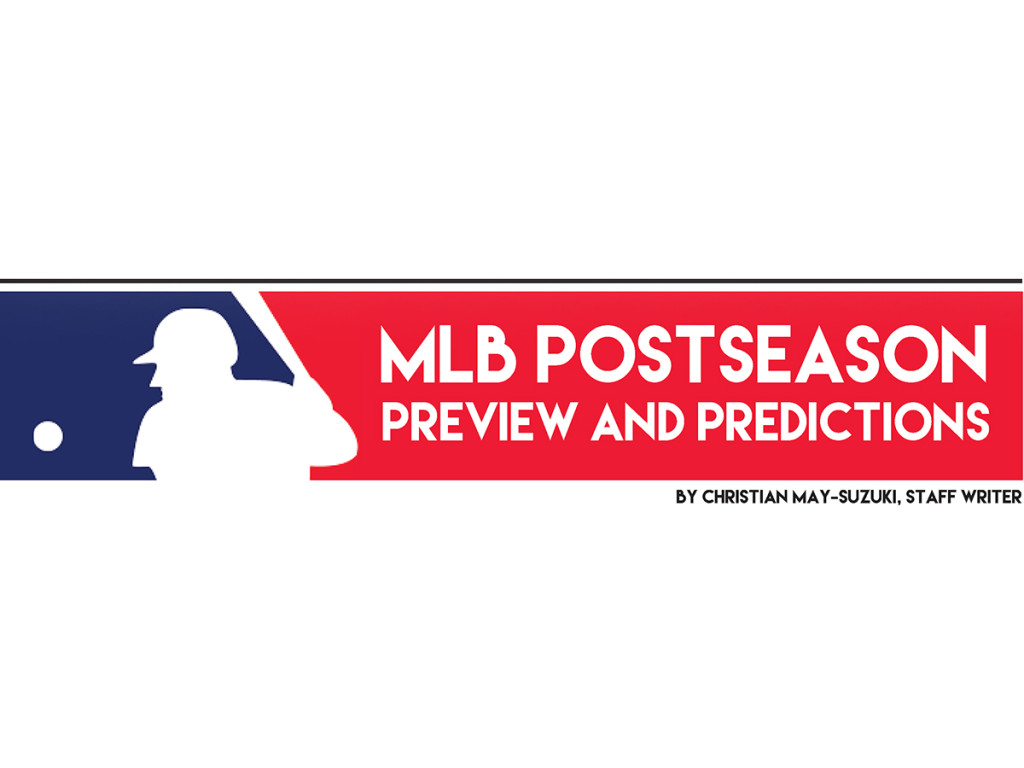 Fall is ushered in every year by three things: school, orange leaves and the MLB postseason. This year is no different, as eight teams once again battle for baseball’s greatest prize. Many faces shift, with the Chicago Cubs, Houston Astros and the Toronto Blue Jays each making the postseason for the first time in several years. Here are my predictions for this year’s matchups:

(3) New York Mets vs (2) Los Angeles Dodgers (NLDS): The New York Mets had the home field advantage for this series with a little over a week to play in the regular season. Despite watching this lead slip away, the Mets match up toe-to-toe despite the Los Angeles Dodgers’ $200 million payroll. With the emergence of a dominant Mets rotation, the return of longtime captain David Wright after a season plagued by injury, and the rise of NL MVP candidate Yoenis Cespedes — who posted a .287/.337/.604 with 15 home runs and 44 RBIs in just 57 games — the Mets should have more than enough firepower to take care of some of the unproven, low-average hitters the Dodgers have brought into the postseason.

(4) Chicago Cubs vs (1) St. Louis Cardinals (NLDS): Ah yes, the return of the Chicago Cubs to the postseason. Each of their returns is filled with a glimmer of hope that the longest championship drought in professional sports can finally be lifted — the curse of the Billy Goat and of Steve Bartman expunged from the ivy at Wrigley Field. The Cubs bring a very strong core of young hitters lead by 1B Anthony Rizzo and rookie 3B Kris Bryant, and possess the scariest pitcher in baseball in the form of Jake Arrieta, who set the MLB record with a microscopic 0.75 ERA. The Cardinals come in as baseball’s only 100-win team and the only team in baseball with a sub 3.00 ERA, but have been hit with a flood of injuries. 1B Matt Adams has been left off of the postseason roster, and ace Carlos Martinez was ruled out for the rest of the postseason. Adam Wainwright, the Cards long time ace who suffered an Achilles tear on April 25, was put on the postseason roster in the bullpen, a role in which he won the ’06 World Series with the Cardinals as a rookie closer. Despite all of these injuries, the Cardinals still have depth, with the solid play of youngsters Tommy Pham, Stephen Piscotty and Randal Grichuk helping St. Louis stay the best in baseball. In the end, in a series with two great teams, the Cardinals’ home-field advantage and experience will trump the Cubs.

(3) Texas Rangers vs (2) Toronto Blue Jays (ALDS): You won’t see a stronger offense than the Blue Jays this postseason. The trio of Josh Donaldson, Jose Bautista and Edwin Encarnacion alone combined for 120 home runs, which was more than an entire team (the Atlanta Braves) and tied with another (Miami Marlins) in home run totals this year. This translated into the Jays scoring 5.5 runs per game, beating the next best mark by almost a full run (4.72, New York Yankees). David Price has led the pitching charge for the Blue Jays with his usual stellar play since the Jays acquired him from the Detroit Tigers at the non-waiver trade deadline (9-1, 2.30 ERA in 11 games). The Rangers are at a bit of a crossroads, combining young talents Rougned Odor (21) and Delino Deshields (22) with players toward the end of their careers like Adrian Beltre (36), Josh Hamilton (34) and Prince Fielder (31). Despite this, they were third in runs per game this year at 4.64, so don’t expect any modest scoring games with this series.

(4) Houston Astros vs (1) Kansas City Royals (NLDS): The Royals don’t possess nearly as much power as teams like the Blue Jays, but power isn’t always necessary to be an incredibly dangerous offensive team. Despite being well below the league average in home runs, Kansas City makes up for it by striking out only 973 times, leading the league in that category by a sizable margin — Atlanta was second at 1107 — in addition to placing second in both hits and batting average, and ranking among the top in the MLB in triples and stolen bases. Only one player in the Royals starting lineup bats under .250, led by an excellent year of production from CF Lorenzo Cain (.307/.361/.477). Meanwhile, the daunted Astros farm system that so many had been talking about for years is finally beginning to yield results. Led by homegrown prospects Jose Altuve, Carlos Correa and George Springer on the offensive side, the Astros only trailed the powerhouse Blue Jays in home runs, and have eight or nine players in their lineup that come with the threat to hit one out of the park. The difference for me lies within the pitching, and the one-two punch of Dallas Kuechel and Colin McHugh, along with an above-average bullpen makes the Astros tough to pick against.

(3) New York Mets vs (1) St. Louis Cardinals (NLCS): A rematch of the classic 2006 NLCS that the Cardinals won in seven is sure to be just as close. No one can overstate the sheer dominance of Jacob DeGrom and Matt Harvey this season and Bartolo Colon’s resurgence cannot be overlooked despite a poor finish to the year. The Cardinals remain very deep, but they do not possess the overwhelming talent that the Mets do after the injuries. What St. Louis does have in their favor is an uncanny knack to string hits into runs, and carry far and away the best bullpen in baseball. If pitcher Michael Wacha can return to form — which I believe he will — it’s hard to go against the Cards.

(4) Houston Astros vs (2) Toronto Blue Jays (ALCS): A matchup between baseball’s two top home run clubs should prove to be a fun one. While the Blue Jays get the nod in overall offensive production, averaging one more run per game than the Astros, the Astros also rank just outside the top-five in ERA, with Toronto sitting closer to the middle of the pack. If R.A Dickey or another Toronto pitcher can step up a game and shut down the Astros, it might be a longer series, but I have to give advantage to the balance of Houston.

(4 AL) Houston Astros vs (1 NL) St. Louis Cardinals: A matchup reminiscent of the mid-2000 clashes that hosted the likes of Craig Biggio, Jeff Bagwell, Lance Berkman, Scott Rolen, Jim Edmonds, Roger Clemens, Roy Oswalt and Chris Carpenter. This premier matchup has always been confined to the NLCS until Houston’s move to the American League in 2013. This year’s rendition would display different types of stars, with Cardinals C Yadier Molina being the only player left from their last postseason matchup in 2005. While Houston has a balanced lineup that has the ability to put runs on the board with one swing, the Cardinals are just as good at keeping opponents in the park, ranking second in the majors with only 123 home runs allowed. The return of Cardinals all-star OF Matt Holliday to a more consistent role in a year plagued by injuries will provide St. Louis’ offense some decent support in combatting the slugger-heavy lineup of the Astros — he totaled 20 or more home runs in the five seasons prior to this one. While the Cardinals possess an underrated opposition to the powerful Houston offense, the Astros provide the same to the daunted Cardinals pitching. On top of a Kuechel-led rotation, the bullpen for the Astros has also held strong, with relievers Will Harris and Tony Sipp both having sub 2.00 ERAs. It would be a hard fought series, but if the Astros cannot find answers to the home dominance of LHP Jaime Garcia (who hasn’t lost at home since July) it will be hard for a team so young to overcome such an experienced team with a dominant pitching staff.

Most likely to prove me wrong: The Chicago Cubs… Dare I say, the Cubs actually have a legitimate dark horse shot to win the World Series. If they can take advantage of the Cardinals pitching and lackluster slugging, the Cubs can enter the NLCS as one of the favorites to win. Yes, Jake Arrieta is that scary right now. With solid pitching, solid hitting and a young core that has played together for most of their careers, this year might be the last we make fun of the Cubbies.