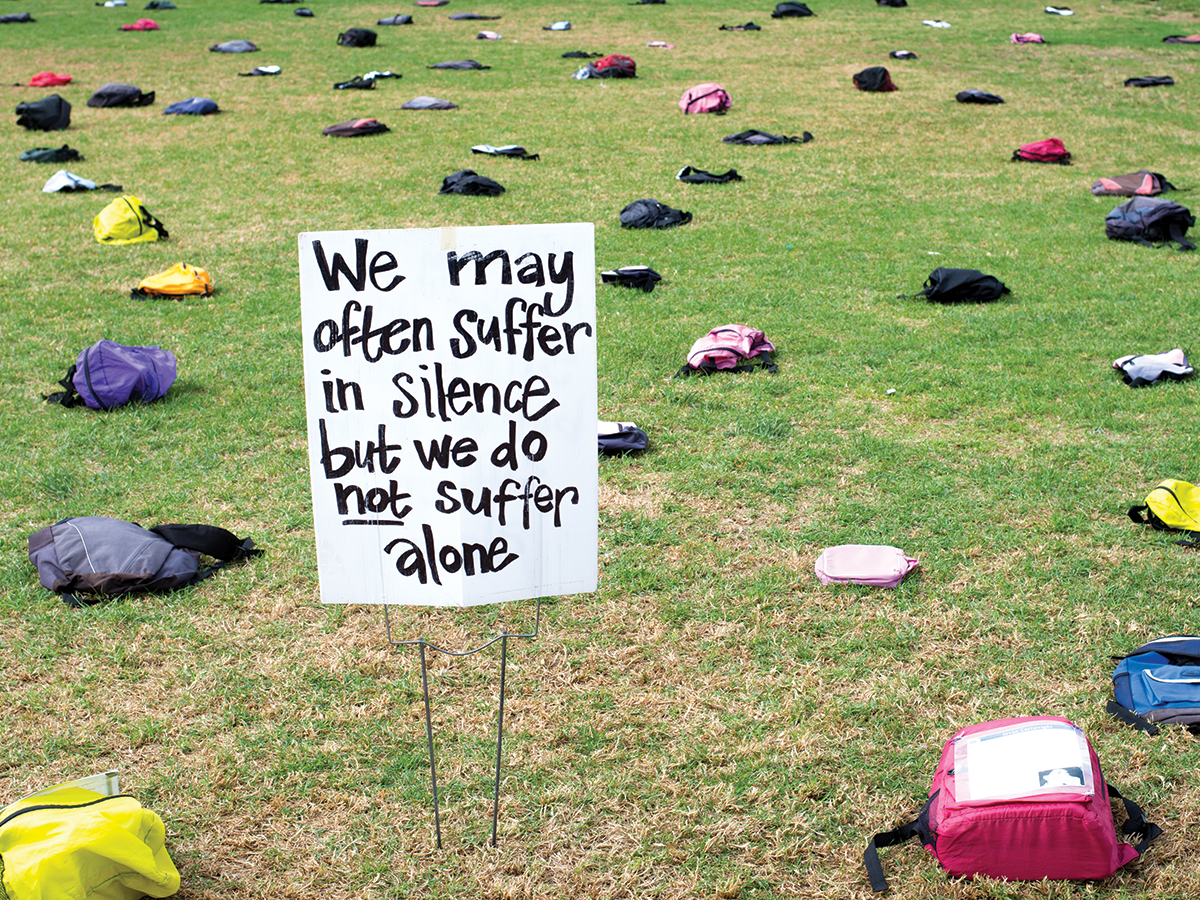 On Thursday, October 15, 1,100 backpacks were scattered across the University of California, Riverside’s Bell Tower Lawn from 10 a.m. to 5 p.m. in honor of college suicide victims. The event, called “Send Silence Packing,” is a program created by Active Minds, the nation’s leading organization on young adult mental wellness.

Since its inaugural display on the National Mall grounds in Washington, DC in 2008, Send Silence Packing has traveled to over 98 cities in California and the Midwest, visiting over 320,000 people.

The backpacks, which were donated by friends and families of the deceased, are often decorated with personal stories or poems. The stories provide an outlet for survivors’ grief, and serve as a powerful and sobering experience for observers, according to the exhibit attendees.

By providing a tangible manifestation and an accompanying story, passersby are able to put a “face” to suicide, according to Redding. Consequently, onlookers are able to imagine the loss of a human life, rather than glancing over a name in the paper or text on a television screen.

Despite the organization’s best efforts, honoring 1,100 sons and daughters does not paint the full picture. According to a 2012 study published by the Suicide Prevention Resource Center, 10 to 11.2 percent of the then 14.1 million undergraduate and graduate students had either seriously considered suicide, made a plan, or had actually attempted suicide.

“Mental health problems are common among college students and the consequences of untreated mental health issues can be devastating,” she elaborated. “Stigma is a major reason why students don’t seek the help they need, and when it comes to suicide, that help could save lives.”

To combat the stigma associated with suicide, Active Minds was founded in 2000 to connect students to resources, raise awareness of mental health and educate about mental disorders.

Since its inception, Active Minds has expanded rapidly, establishing a network of over 400 student-led chapters at high schools, colleges and universities, including a chapter at the University of California, Riverside.

The nonprofit organization has been featured on prominent media outlets like CNN and the New York Times.

“The pain of his loss is beyond words. Devastating,” one of the backpacks lamented. “That is why we have chosen to support efforts to prevent suicide and we hope that you will, too. There is help. There is hope.”

UCR was the final stop of Send Silence Packing’s 2015 Fall Tour. The UCR Active Minds Chapter meets periodically throughout the year at Hub 248.