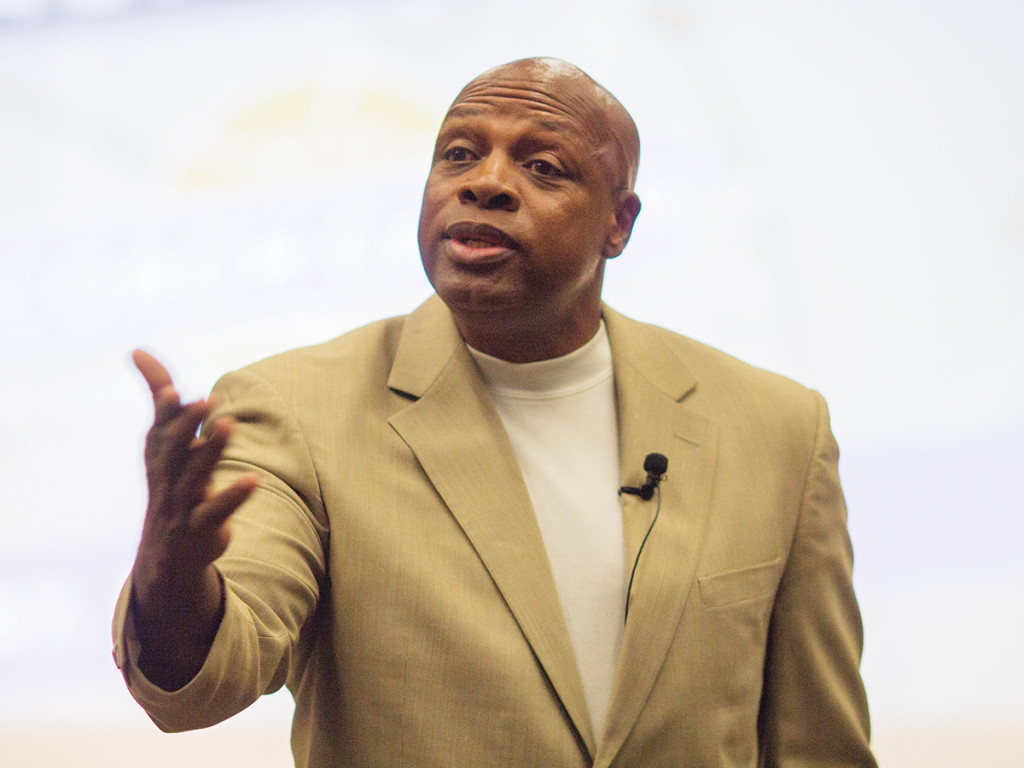 Let’s all take a moment to relax, reflect and ruminate on the bygone year of 2005. What a time it was: Bush was inaugurated for the second time, causing an entire generation to kick themselves, Katrina was about to hit New Orleans and the whole Iraq War debacle hadn’t yet worn out its welcome. In addition, the movie “Coach Carter,” about the experiences of Ken Carter at Richmond High School, came out. I have to admit I’ve never seen “Coach Carter,” because I feel Samuel L. Jackson, who played the titular coach, is only at his best when averaging at least 10 mpm (10 “motherfuckers” per minute) and the movie is rated PG-13.

To kick off our homecoming week, the actual Coach Carter came to give a talk to a modest crowd gathered in Hub 302. Famous for his dedication to coaching on the court and his dedication to academics off the court, Carter’s presence in front of both students and student-athletes served fitting as an introduction to homecoming.

The night began with a quick round of Carter-related trivia, the prize being a chance for a meet- and-greet after the presentation. Though I hadn’t seen the movie, a quick look at the Wikipedia article for the film gave me a correct answer as well as a wristband. After a final introduction by our own athletic director Tamica Jones, Carter arrived to the stage set to the tune of 2 Unlimited’s “Get Ready for This.” Wearing a cream-colored suit and standing at moderate height, Carter bounded to the front of the room. While admitting that he certainly wasn’t as tall as Samuel L. Jackson, Carter explained that he was “better looking.”

The film “Coach Carter” has certainly fallen out of our collective memory, and no one seemed more aware of this than Carter himself. Aside from subtly hinting at the large sum of money he made for telling his story on celluloid, Carter instead delivered a rousing and encouraging speech that would have been at home in any locker room at half-time. Though we were a room full of total strangers, he moved off the stage and walked amongst the rows, shaking hands with some attendees and lightly punching others. He paid special attention to the basketball players that gathered near the rear of the room, making fun of their Air Jordans and earrings.

It’s hard to remember everything in order, as Carter’s speech had an improvisational feel about it, as he circled back to reiterate important points in between punches and handshakes. He told the crowd that even though young people are one-third of the population, we’re 100 percent of the future. He attempted to define the difference between “broke” and “poor,” with broke being a lack of money and poor being a lack of drive. His personal advice for realizing your dreams was to write them down, and he assured us that they were 10 times more likely to come true if we did so.

I’ve never been on the receiving end of a rousing mid-game speech, but I found myself being inspired by Carter’s words. While I couldn’t set out to win a homecoming game, I felt a drive to do something. For those of us struggling through the late quarter stretch, it’s important to remember why we’re all here at UCR. This was the central point of all of Carter’s musings, and many of the other attendees seemed inspired by his words. After throwing a student’s shoe and a few more jabs, Carter had us rise to our feet, place our hand on our heart and spin around. “Now,” he told us, “you can say Coach Carter raised you up, touched your heart and turned you around.”

Afterward, I realized that the wristband I earned wasn’t needed, as Carter stopped to take a photo with almost everyone in attendance. Still, when it was my turn I made a point to ask him a few questions. He explained that he shaved his moustache to change his look, that his pick for the NBA championship winners is the Cleveland Cavaliers and that “Coach Carter” is the best movie ever made.

I’m going to make sure I watch the signed copy he gave me at the event.