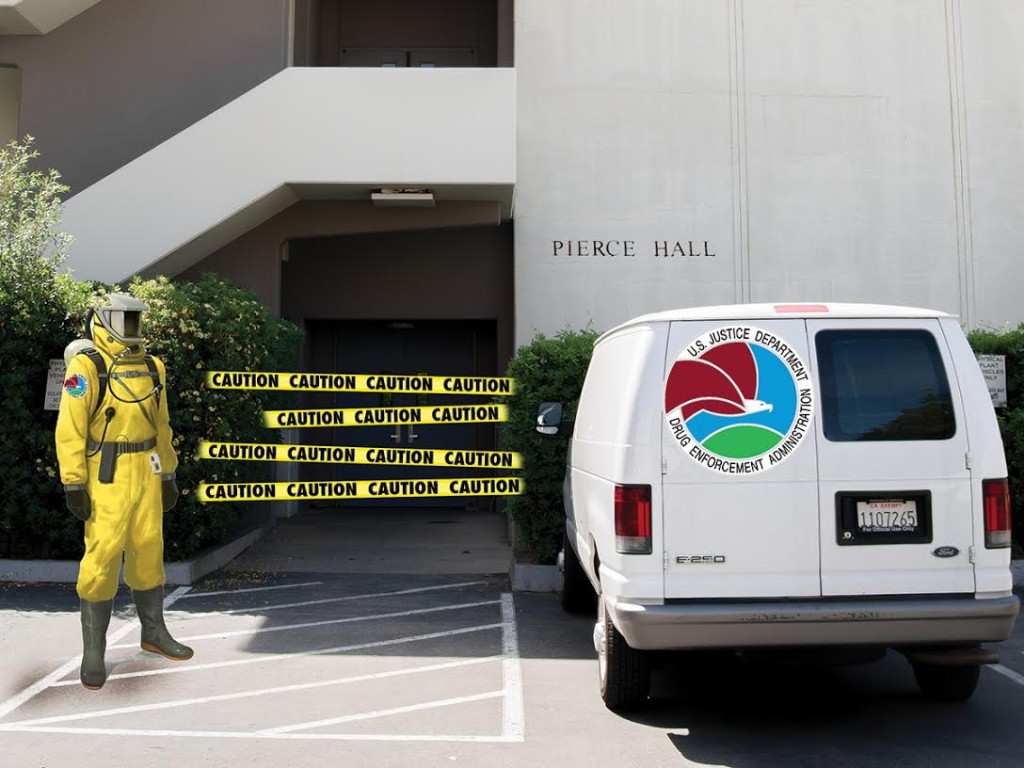 Last week, a methamphetamine lab was discovered on the second floor of Pierce Hall. The lab was brought to public eye after an explosion that blasted the roof off of the building occurred on March 22, the second day of spring break.

Evidence recovered from the scene shows that the lab had been running since approximately March 16, while most students were still busy with finals week of the winter 2016 quarter. Investigators predict that the incident was a poorly implemented experiment that attempted to copy some of the events portrayed in the television series “Breaking Bad.” The show began running in 2008 and features a high school chemistry teacher who colludes with a former student to cook and market methamphetamine.

As of now, fourth-year chemistry student Baron Greek, and professor of methology and crystal math Xina White, are being held and questioned after video surveillance cameras showed them walking into the building 20 minutes before the lab combusted.

Greek will likely be expelled from UCR because of his failure to properly create a pure form of methamphetamine. A majority of faculty in the College of Natural and Agricultural Sciences voted that they did not need students like Greek wasting their time and causing unnecessary explosions.

White, who joined the UCR faculty just last year, earned her undergraduate and master’s degrees at Everest College, a college which has been sued on charges of fraud and has since declared bankruptcy.

“I’m not actually sure why we hired her,” said UCR Chancellor Kim Wilcox when asked about the topic. “I’ve never actually heard about her until we were unfortunate enough to have to deal with this incident. I think that firing her would be a good idea since she could not even cook methamphetamine correctly. Hold on … is Everest even a real college …?” Wilcox questioned, shaking his head with confusion.

While further investigation is still needed to determine the culprits, it is clear that the plan was poorly executed and has caused an estimated $5 million in damage to Pierce Hall and a few of the surrounding buildings.

“I think they thought that they could get away with it since no one even knows where Pierce Hall is. Also I think that ‘Breaking Bad’ makes cooking meth look so easy that they look like total dipshits for failing,” said fourth-year English major Aaron Grech before riding off into the sunset on his hoverboard.