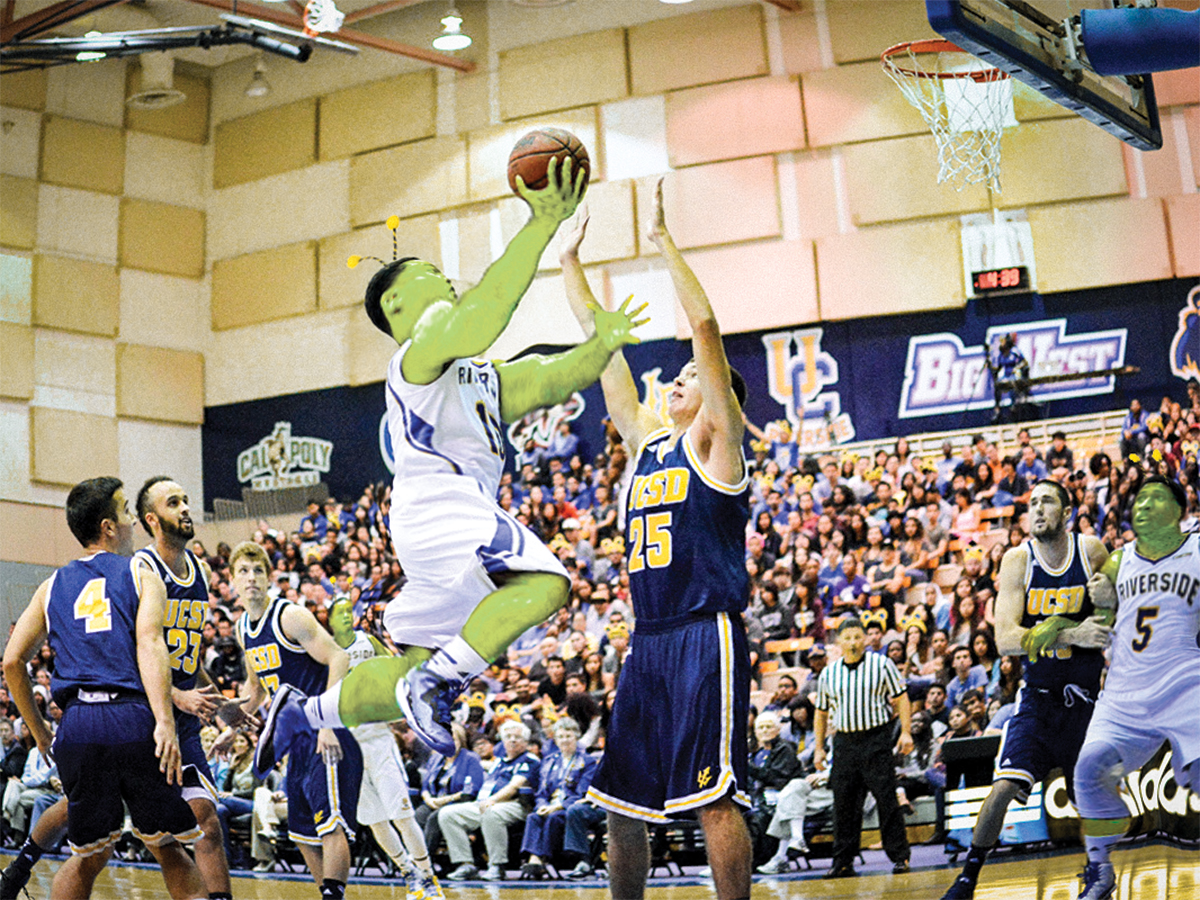 As a diverse university, UCR’s athletics department prides itself not only for providing educational opportunities for those abroad from other countries, but also abroad from other planets. As the first campus in the UC system to recruit a literally out-of-this-world athlete, UCR welcomes the newest addition to the men’s basketball team — OTL from the planet Glingbar in the Ostrella System.

Although English is not OTL’s first language, his expressive hand movements and his skill in telepathy allowed for this interview to occur. However, for the sake of cultural exchange, this article will include his answers in his native tongue and translations of such following in parenthesis.

Growing up in an entirely different solar system, I started asking with the pressing question, “How did you even learn about basketball?”

With brief images of Looney Tunes characters and Michael Jordan flashing through my mind, I came to understand that since his planet’s diplomats failed to find a way to continue funding the tourism industry, which their planet’s economy is based on, OTL was forced from a young age to take up basketball to support his family.

“zlvkzjflgkjae;oriaw;skdgj;aldkfjt’pj9ewurskgj’a;asldfajs;dlkfjaoiulkn,jlasdfkja” (“As a side show, I made little to no money. But, as I learned of my planet’s failures on Earth, I began to have a renewed interest in the sport, especially when puberty hit and I had my first growth spurt.”)

Projecting an image of his younger self standing at only 1 millimeter to my mind, I could only imagine how surprising puberty must have been. Based on current measurements, OTL stands at 81 stories high, which he noted is under average in Glingbar belting out a short laugh that broke several nearby windows. And, my eardrums.

“lk3r9vpo,” (“Sorry about that”) he said as I held a bloodied towel to the side of my head.

After accepting an athletic scholarship at a private high school in a different dimension, OTL spent a millennium honing his jump shots and his lay ups until he was scouted by UCR and given a full ride. Now as an anthropology and English double-major in his first year in Earth college, OTL explained that while he had a hard time adjusting to the new customs and language barrier, he feels confident he can succeed in his lifelong dream that started it all.

When asked what is his dream is, he replied: “askfjsfks;ldfkajsd;lfkjweotuosilkdjtwentosidufasdfjaskhreopasur” (“To annihilate Earth and all who inhabit it. Michael Jordan shall suffer for the disgrace he brought to my people. All of Earth shall be subjugated to the rule of Glingbar.”)

Although I am not sure what the direct translation of OTL’s reply is (since the translations are added afterward), I’m confident that the image he telepathized to my mind —  of him shooting hoops with Michael Jordan — must mean his dream is to play with Air Jordan himself. And, of course, to win, since Jordan looked like a bit battered as if he suffered a devastating loss.

When asked for any final comments, OTL only had this to say:  “aslkfjas;lfkajs;dflkjwlkj” (“Welcome to the jam. Your planet shall be slam.”)