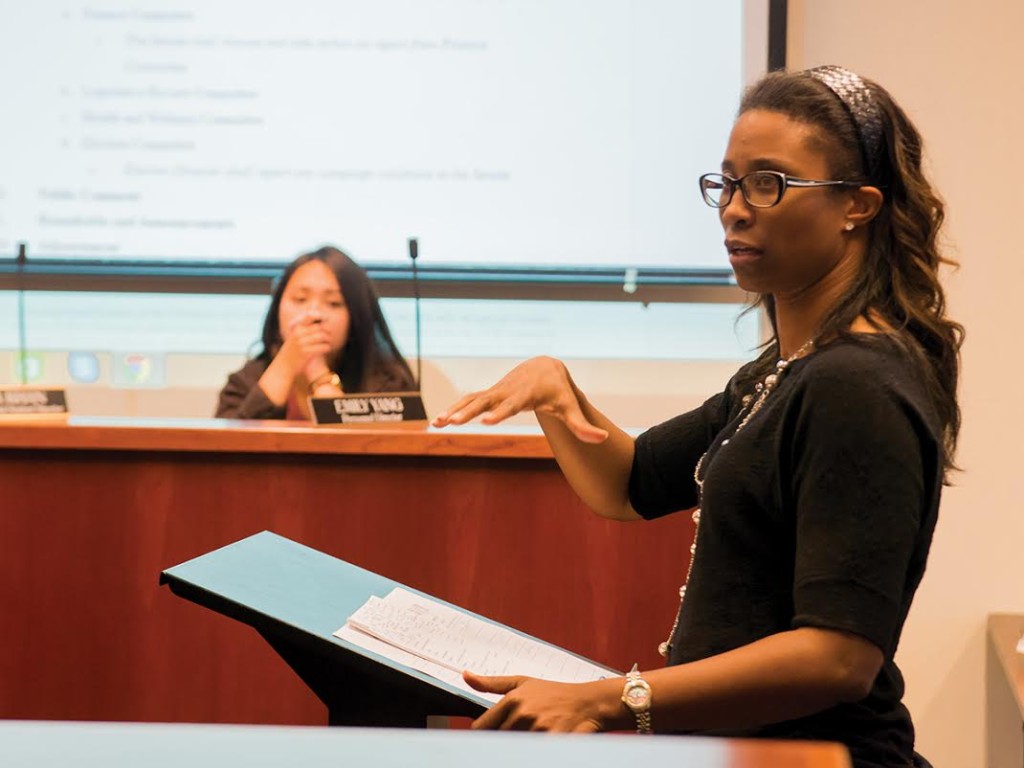 At last week’s ASUCR senate meeting, UCR’s athletic director Tamica Smith Jones spoke to the horseshoe about the improvements in the university’s athletic programs this year and how she would like to get more students involved with the department.

Jones was appointed as director of intercollegiate athletics by Chancellor Kim A. Wilcox last July to oversee the 17 men and women’s sports teams that comprise UCR’s athletic department.

Jones elucidated about the department’s successes and major accomplishments this school year, including having Vesta Bell as the first recipient of a Division I national track title in UCR’s history and an undefeated conference season for the women’s basketball team.

Next, Jones explained how she would like to work with students and ASUCR to further improve the department and expressed her belief “that it takes a team of people to build a high profile athletic department.” Jones reiterated the three Ps, which included social media promotion, presence at athletic events and partnerships between ASUCR and student athletes that will allow each other to get more involved.

Afterward, Elections Director Melina Reyes explained that an email had been sent out on the morning of April 11, the first day of elections, about how to avoid laptopping and that “candidates have been discouraged from engaging in laptopping.”

On Wednesday morning, Reyes sent out another email that further established the laptopping guidelines both for candidates, volunteers and for students. “It was created with collaboration between the elections committee and the judicial council to establish what it is, what’s acceptable and what accompanying behavior is unacceptable; which can include harassment or being followed or the refusal to accept a negative answer,” Reyes elaborated.

During the elections committee report, Reyes spoke about the strikes that had been administered after going through the appeals process. As of Wednesday, both the [YOUR]Side party and the Orange Party had received two strikes for distributing materials prior to elections committee approval, while the only individual to receive a strike was Dalshawn Boson from the [YOUR]Side party due to “negative campaigning.”

According to the elections bylaws, “negative campaigning shall be defined as any campaigning, electioneering, or vote soliciting against an individual candidate, group of candidates, or any others involved in elections including but not limited to the distribution of materials, posters, fliers, speeches, advertisements, and electioneering that enumerate information, untrue or unverified that can be construed as derogatory, inflammatory, or disreputable in any way.” Other appeals are still in the process of being assigned a verdict.

– President Ashley Harano announced the ASUCR Chancellor’s Committee on Sexual Harassment and Sexual Violence Prevention will be hosting its first event called “The Haze,” a tragicomedy written by Heather Marlowe, on Tuesday, April 19 from 7-9 p.m. at the University Theater.