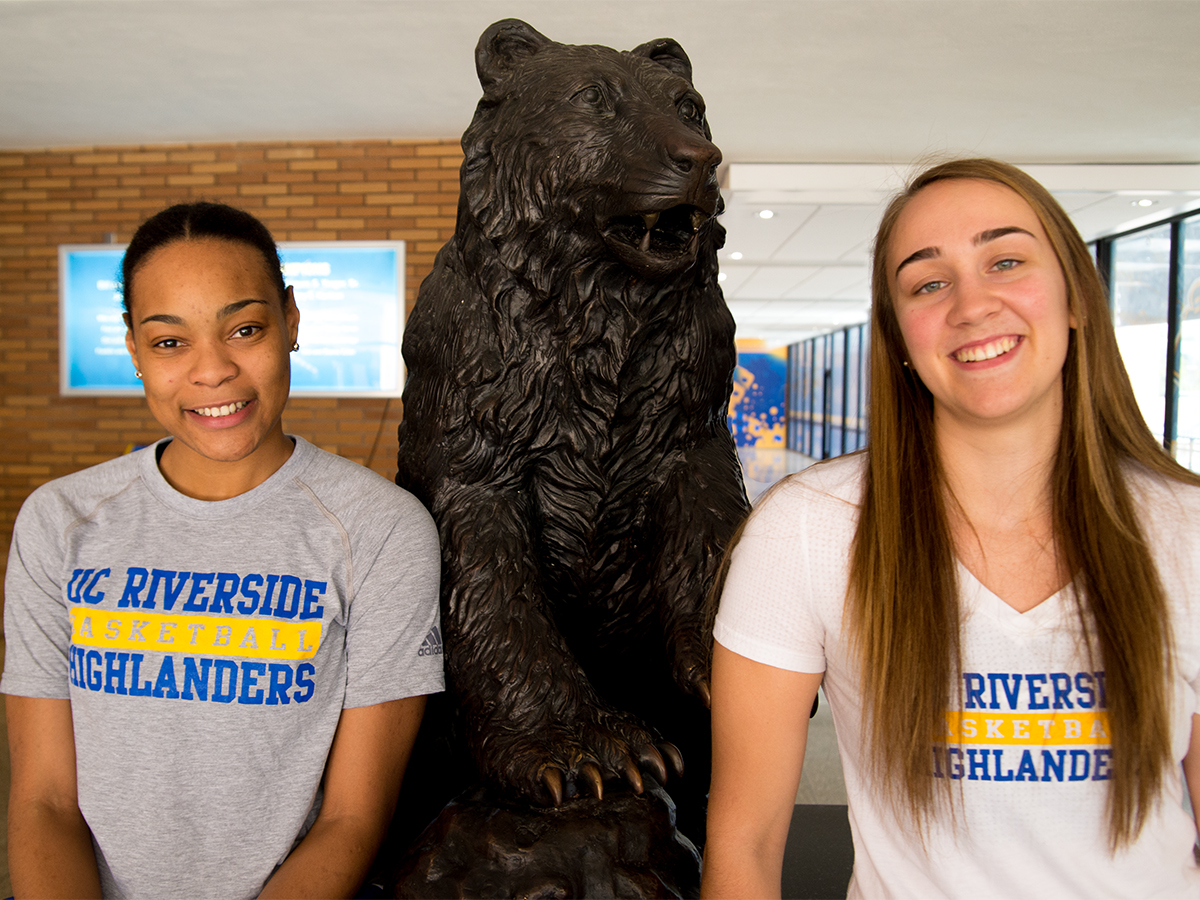 I met up with Rejane Verin and Clemence Lefebvre — two of the newer members of UCR’s women’s basketball team — to ask them how they, as international student athletes, are handling their first year here at UCR. After we laughed about my ineptitude in pronouncing their names, we dove right into the interview.

Any avid fan will understand that they were part of an exceptional team this year. But, while they were making headway toward an undefeated Big West record, they had to adapt to their new campus surroundings and keep up with their studies.

Before we began, I couldn’t help but notice that both players were speaking to each other in a different language. Upon asking where they were from, it turns out they were from French-speaking countries, with Rejane from a small island called Guadeloupe in the Caribbean and Clemence from a city an hour away from Paris called Rouen.

According to Rejane, her island home was “pretty much like Hawaii, but better.” Quickly stating she was just joking, she went on to describe how the nice weather, people and food allowed for the community Guadeloupe to be “low-key” tight-knit with everyone knowing everyone.

She especially pointed out that the food was the best, consisting of fish, plantains, beans and coconut-based foods — usually covered in some sort of spice. “If we can put spice in our food, we’ll put it in. Any. Food,” she said, a tad bit serious.

To Clemence, her hometown seemed like an extension of the City of Light, what with the same architecture and culture they both share — short buildings aligning wide boulevards with historical landmarks at every turn. Upon seeing New York City for the first time, she was immediately struck by how big everything was from the buildings to the portions of meals.

Prior to UCR, both spent time in America playing ball at different colleges.

Arriving by herself at the age of 14, Rejane attended high school in LA and lived with host families until she went to college. When asked if she worried about anything specifically, she truthfully replied, “My worry was the food. When I was back home, I had the local food all the time and I know that coming to America people being obese is a big deal. I was scared to become fat by eating all the junk food and stuff.” She explained that although she understood she wouldn’t turn obese, she explained, “From what you get from America when you are outside of it. You get not the good stuff.”

New to Southern California, Clemence transferred from a Kansas university, saying her new surroundings had everything. “You got the sun, you got the palm trees. You got the beach and mountains. It’s cool,” Clemence said.

Yet, overall, she found stark differences between how people grow up to become student athletes in America and France. “I feel like here, you can ask anybody and they are gonna be like ‘yeah, I’m going to be working out some time this week’ or ‘I’m going to run,’” said Clemence, finding that there was a lack of a sports culture in Europe. With high school and college students in France often loaded with packed study schedules, there was often no time to pursue extracurricular activities, especially sports. So, in contrast to America, where you can become a student athlete any time during your primary school education, students in other countries, like France, can only be student athletes in their home countries until the beginning of high school.

“You can’t do both,” she plainly said — unless you were on the Olympic team, but as Clemence explained, that rarely happens.

When I asked what options they had if they still wanted to be athletes, Rejane popped in. “You have to leave your own land, if you want to pursue it further. That’s what happened to me basically. I had to go somewhere if I wanted to keep going.”

In Guadeloupe as well, sports are not considered a way to “pay your bills,” according to Rejane. But, in America, where there are more resources and programs available to many wishing to participate in sports, immigrating here just made sense. “When you have the opportunity to come to America, I don’t think people will say ‘no.’”

Although they both agreed to coming stateside to play and have remained for a number of years, both said they had their fair share of obstacles ranging from living with host families to handling the quarter system.

However, in short responses, both stated that they have found friends. While Rejane said with a straight face, “I don’t like people, but I have friends,” Clemence said, “Well, I have friends, so I’m pretty good” before bursting out laughing to the point a coach passed by, wondering what we were doing.

Kidding aside, Rejane mentioned one critique she had in terms of UCR’s international student body programs. “I wish we did more stuff together,” she said in earnest. ”I want something where we hang out and go. I want to do something fun. What we have in common is that we come from somewhere and we’re here by ourselves.”

Agreeing, Clemence said beyond her fellow peers in the athletics department, she hardly meets other international students. “We’re athletes, we don’t know them.”

As the interview drew to a close, I asked both players if they had any final comments. Rejan had two things she wished to end with, leaning forward with a smile.

First, a “shout out to all the international students … if you’re in this position, it’s for a reason and congratulations to wherever you are right now. We need to inspire other people, because that’s how we bring people together.”

Second, she asked if the acronym “YGFA” could be printed not so much as a message to anyone, but herself. Deriving from Creole French words, when I asked what YGFA meant, she said she didn’t want to define it other than it was her motto in life. I’m left wondering if “YGFA” is what kept her going the last eight years she’s been pursuing basketball.