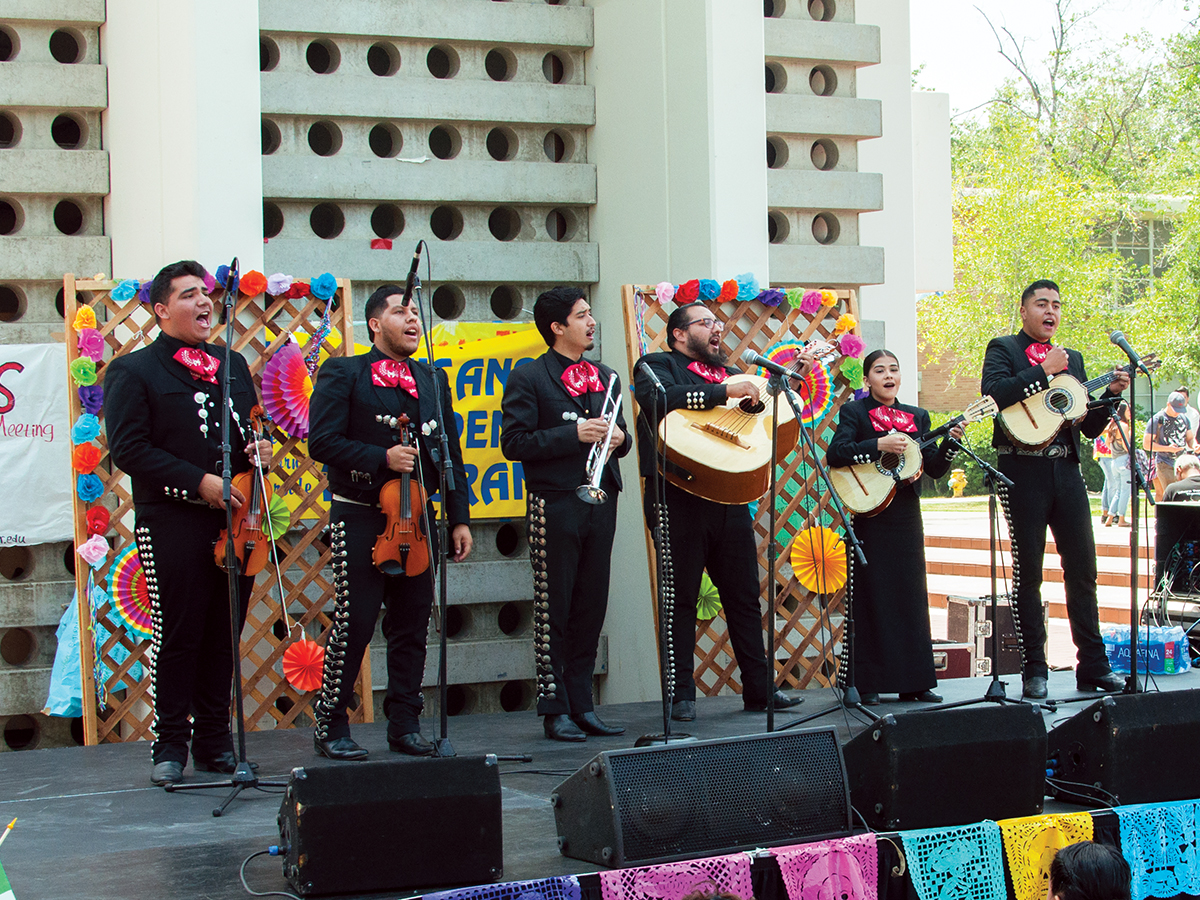 Wednesday’s Semana de la Raza festivities, hosted by Chicano Student Programs, featured an entertaining nooner that energetically displayed Chicano music and dance. Ten student unions and organizations gathered around the premises of the Bell Tower. Vendors surrounding the tower sold Chicano food such as tacos and burritos, so people could indulge in satisfying, savory Mexican cuisine as they watched the mariachi band, which consisted entirely of second-generation musicians.

Their stage presence was electrifying, for they interjected their songs with frequent commentary to engage the crowd. There was even a point where the frontman dedicated a song to Scotty, much to Scotty’s surprise and pleasure.

“We’re available for birthdays, quinceaneras … break-ups,” the frontman said as they closed their set. After their performance, the coordinator of the event suggested that the crowd work off their burrito bellies by dancing to lively instrumentation at the foot of the tower. People naturally joined in and pranced around the Bell Tower, carefree and full of laughter. No one cared if they missed a beat or if they stumbled; all that persisted throughout the dancing were smiles.

This event was special because it was something that resonated with a lot of people from varying demographics, and it never tried too hard to make that connection with each individual. There were no theatrics — just a band singing their hearts out to an inviting crowd. That simple premise was able to speak volumes and touch people at the event because it demonstrated that music is a universal language we can all enjoy together in harmony.

The weeklong celebration of Semana de la Raza brought the unique culture of Chicano and Latino people into the spotlight. On Thursday, the celebration continued with the comedy presentation, “Che Castro Speaks … On the State of Xican@ Studies, Pop-up Books and Mickey Maoism.” Although the event was comedic, an important and serious message hid underneath the surface.

At HUB 355, John Avalos Rios, a ballet folklorico Mexicatl instructor at UCR and host of the show, opened the presentation with an explanation of the significance of pop-up books. He did so as a response to the banning of Chicano literature in the state of Arizona. When a pop-up book is opened, a three-dimensional picture rises from the pages of the book similar to the inevitable revival of Chicano literature. He proclaimed, “You can ban Chicano books, but they’ll still pop up!”

Next, Rios introduced Rudy Acuna as the “Grandfather of Chicano Studies,” who was actually a comedic persona of Elias Serna. Stepping out in a blonde wig and a pair of sunglasses, he took the podium and said, “I’m all about writing Chicano and Chicana into history.” He talked about how there are not many streets named after Chicanos. He said somewhere in the back of UCR, there is finally going to be a street named after a Chicano. Acuna pulled out a “One Way” sign, but instead it said, “Juan Gway.” Slowly but surely, people understood and began laughing.

Following Serna, Rios directed our attention to the screen, where the four basics of Chicano curriculum were displayed: self-reflection, transformation, knowledge and the will to act. He made the audience slap their knees to create a beat and chant the words as Serna transformed into his next character.

Stepping out in a green military jacket, a long curly wig and a matching green hat, the character of Che Castro greeted everyone. With a fake cigar in hand, he addressed the importance of knowing our indigenous roots. “Chicano and ethnic studies help us to understand them,” he said. “Our parents worked hard with their hands so we can work hard with our minds.”

Although the event had its laughs, the point of the pop-up book movement and the comedic presentation was to revive the presence of Chicano books in Arizona. Near the end of the event, Rios passed out supplies for the audience to create their own pop-up books in a “Xican@ Pop-up Book Manifesto.” By doing so, everyone went home with the knowledge that Chicano studies is just as important as the history itself.

Though the stage set up for Chicano Batman in front of Rivera Library was smaller than the ones set up for Spring Splash, it would rival the energy of the larger stages because of its vivacious performers.

Before Chicano Batman played, people clustered on the lawn while enjoying energetic beats from Los de Alla, a local band composed of UCR students. They energized the crowd with covers of Selena and other upbeat Chicano-rock and banda tunes, which features brass instruments and strong beats.

Chicano Batman is a LA-based band that combines recuerdo, psychedelic and soul music into one eclectic mix. Third-year gender, sexuality and ethnic studies double-major, Brayan Cruz said that he encountered their music four years ago, when they headlined for a Musica and Movimento gathering, which focused on social justice and community-based organizing in Santa Ana. He shared, “They’re the type of group who visits places where people of color are at.”

By sharing their art with the community, they bring awareness to issues pertaining to people of color and align themselves with grassroots initiatives. “Just the fact that they call themselves Chicano. Chicano is a very political word because it’s a political identity,” Cruz continued.  From the very beginning, their aesthetic brought awareness to political and social causes. “Chicano Batman came to be from … the drawing of an eagle” from the United Farmworkers Union. The band then combined this image with pop and political culture references and thus, the Chicano Batman aesthetic was born.

Finally, after the sun had gone down, the sound of Chicano Batman arose with their signature retro sound. Recuerdo means memory in Spanish, and their music indeed brought the audience back to an imagined time when the romantic greaser made music with the psychedelic explorer.  Based on their unique style and approachable, laid-back vibe, Chicano Batman appeals to a diverse crowd, who appreciates distinct musical talent and are politically conscious. The nature of the crowd can be described as: Proud, punk and 420-friendly. Because of their versatile vibe, Chicano Batman continues to create a conscious and expansive experience that we hope they maintain as they ascend into greater popularity.

As the closing act of the Semana de la Raza week, photographer Star Montana told her life story of pain, anger and revival in the form of a photography collection titled, “Tear Drops and Three Dots.”

Montana, who spoke on Friday, May 6 at HUB 265, grew up in the working-class, predominantly Mexican American Boyle Heights, a neighborhood in East Los Angeles, where she was exposed to violence, death and drugs. These issues followed her throughout her life, but before Montana went in-depth on her personal narrative, she talked about her family history.

“My grandparents migrated from Chihuahua (a state in Mexico) to El Paso. At the end of World War II, they left their lives in El Paso and moved to Los Angeles to pursue the American dream,” said Montana.

However, it wasn’t all that easy.

“As soon as they migrated, my grandmother died. I had always been uncompassionate to her (legacy) because I never considered the turmoil she went through.” However, when Montana’s own family began to experience chaos in Boyle Heights, she began to realize that the American Dream was indeed anything but close for her and her family.

Describing her first photo collection, which was a collage of photos she took of her family in the 1990s, Montana said, “In all of these photographs, we’re not together. We’re no longer a family because we’re all facing systematic and economic racism … and with each collage, you see less and less figures.”

An example she gave was when her uncle was unexpectedly murdered in the streets of Boyle Heights. Twelve years after this incident, Montana’s cousin, Junior, was killed the same way. “After Junior’s death, you don’t see my aunt anymore,” she said with her passionate voice trembling.

After the third collection, the slides were reduced to individual photos as the portfolio transitioned into a “stricter narrative.”

The beginning of the narrative focused on her mother, whose health was deteriorating due to Hepatitis C. In one of the photos, her mom had two large bites on her foot, which the doctor refused to treat because he was already treating her for an ear infection and would only treat her for one. Montana said that this was a reflection of a bigger problem in which minorities are disadvantaged in health care and the workplace.

The last picture Montana ever took of her mother showed her mother talking to her from a hospital bed after falling ill only a few days after being discharged by the doctor. Commenting on her mother’s worsened health, Montana said, “This is what happens because of the system. This is why I question everything.”

After her mother died, Montana said it felt “like my life was over.” However, that same year, a new face appeared in the collection. In 2010, Montana’s brother, Frank, had a son, who Montana said was “so full of life … I was so full of despair but then there’s this little person who just changes everything.”

In one of the pictures of Montana’s infant nephew, the family was celebrating his first birthday and he was being held up by his father to reach for a balloon. The balloon was right under the ceiling lights which illuminated the otherwise dark room. Inherently, the lights symbolized her nephew’s presence in the family’s life, for he emanated hope when it seemed unimaginable.

“All that mattered on his birthday was that he just had this balloon and this was when I remembered happiness again,” she said.

The last four pictures of the collection were of Montana’s nephew and they were taken one year apart from each other. As the boy progressed each year, so did Montana’s optimism for the family.

“He is our joy … he is our future,” she said, ending the display of her collection with the hope that her family’s long-awaited “(Mexican) American Dream” will finally be accomplished by her nephew.

Montana concluded her presentation by saying that everyone has a narrative that illustrates who they are and how they became that person. She encouraged everyone to share their personal narratives with the world because this allows others to understand where they come from and will ultimately lead to greater acceptance.

“That was my narrative, but what is yours?”