Senryu Taiko, an organization founded in 1998, was one of the earliest collegiate organizations dedicated to the tradition of kumi-daiko to ever form. In Japanese, the word taiko refers to a wide variety of different types of percussion instruments. Kumi-daiko then, is the performance of these instruments being played in an ensemble, though the word taiko can also refer to the performance itself, depending on the context.

The group has won numerous awards, including first place at the first-ever collegiate taiko competition, and also had the chance to open at last year’s Anime Expo in Los Angeles. Even with credentials like these, the concert far exceeded my expectations with the sheer amount of talent and energy projected during the show. It was a full house, and the audience responded with enthusiasm throughout.

This year’s spring concert was titled, “Four Noble Drums,” which is a reference to the four different flowers that appear in Chinese art to represent the four seasons. To keep in tune with this theme, the performance was divided into four sections — one for each season.

Right before the show started, the lights went out and complete darkness flooded over the audience. After a gasp from the crowd, a single, heavy boom emitted from the stage before a constant drumming, and then a green and orange background lit up behind the performers, in which the colors arranged in a pattern to mimic the outline of a forest.

The power of the drumming was felt immediately. It was evident that the group was thoroughly rehearsed; throughout each act they were nearly perfectly in sync, and when a mistake was made, it was recovered quickly.

The first section, “Fall,” included the songs “Nano Hana,” “San Roku Go Hachi” and “Gaman.” For “Nano Hana,” a fast-paced number, different types of drums were used. There were several chu-daiko drums, which are large — picture huge wooden barrels that create a deep, massive sound. One of these chu-daiko was lodged onto a wooden frame that held it above the head of the drummers, so that each strike of the thick wooden sticks they held forced each drummer to swing their hand in an arc far above their head, while also maintaining the strength and speed necessary to carry to beat.

There were other chu-daiko drums organized symmetrically on the stage, and two drummers kneeling in front playing smaller drums, known as shime-daiko. The smaller drums were used to implement a faster rhythm while the constant, heavy thrum of the chu-daiko echoed in the back like thunder.

The way in which the drummers used their sticks was creative; rather than simply drumming, they would use them to knock against the rim and sides of the drum, creating a clanking noise. Think of it as the lightning between thunder.

Other instruments were also used: hand-sized brass cymbals with red tassels dangling from them, handheld blocks that were tapped together lightly and small rattles that, when shaken, created a serene sound that worked as a nice foil to the banging of the drums.

One of the most interesting points of the concert was that in between the change in seasons, the drummers would come on stage and do small skits to keep the audience preoccupied. Before each season, a poem was read in a manner that encapsulated the theme of the coming set. The poems were read over different music pieces: soft, summery jazz, acoustic guitar and even the familiar theme song to the animated classic, “Spirited Away.”

Other transition skits included a short hip-hop dance to the song “It Girl” by Jason Derulo, a duet featuring acoustic guitar and soft, lofty singing in Japanese, a short cello piece performed by three drummers still wearing the flowing, red taiko robes and a thrilling dance-off between some of the male and female performers — which ended with one of the male drummers jumping and landing in the splits. Well, almost in the splits.

The lighted background would change according to the season, and throughout the concert drummers played in front of the moon, red trees and lightning bolts. The drummers were in constant motion, and never broke the knee-bent taiko posture that allows them to change angles quickly.

Indeed, taiko drumming is a particularly physically taxing musical endeavor. Several times during the event, drummers were seated in front of the large chu-daiko drums, and as they played would lean back into a sit-up position, heads only inches from the floor, while still playing.

At one point, a shime-daiko player was hitting the drums so intensely that one of his sticks snapped and scattered across the stage, but rather than pausing, he swiftly scooped up half of the remaining drum stick and continued to play; the audience roared their approval.

One of the most unexpected points of the concert was when four male drummers ran out on stage to switch places with the female drummers, doing flips on their way out, dressed in only white fundoshis, more commonly known as loincloths. The audience screamed and laughed in equal numbers.

During the final season, “Summer,” any drummer who was not on stage entered in a single-file line through the entrance doors behind the audience. As they made their way to the stage, the drummers performing danced in a circle with the heavy chu-daiko drums strapped to their shoulders, pounding away like it was nothing.

At the end of the concert, alumni and family members were called to take photos onstage. It wouldn’t have mattered if they hadn’t been invited though: everyone was already out of their seats and on their way up regardless. 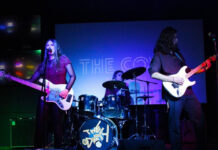 SoCal-based group, The Oddity, flourishes within Riverside as an experimental rock band 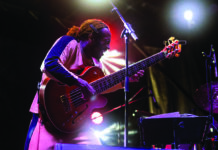