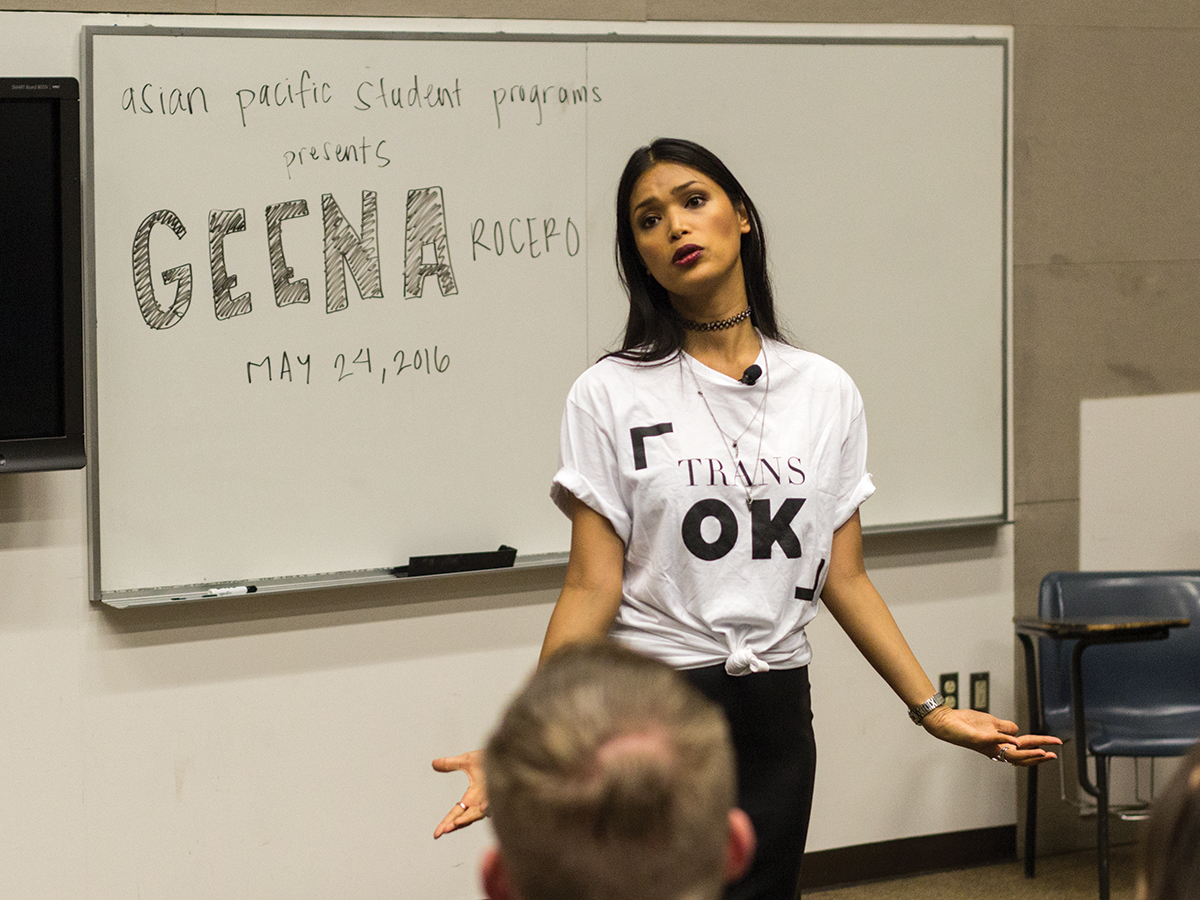 “My role is to educate. My role is to tell a story. My role is (to help) people to realize that we need to talk about history. The world has been led to believe that gender is a binary, and it is not. It’s a difficult conversation for most people, but it is the right conversation to have.”

This was Geena Rocero’s closing statement during her talk, which took place on Tuesday, May 24 in INTN 1020 for the Asian Pacific Student Program’s celebration of Asian Pacific Highlander Heritage month. Rocero is a supermodel, a former “pageant diva” and most importantly, a transgender activist. She made waves two years ago after revealing her identity as a transgender woman — a fact she had previously kept hidden to close friends and colleagues — during a TED talk. Since then she has been traveling around the globe, making connections with other transgender groups, educating audiences and establishing her own production company, Gender Proud.

Gender Proud’s goal, she explained, is to disseminate stories about transgender people that are produced by transgender people instead of cisgender people. According to Rocero, this distinction is important because, “There is really a difference when a trans person is telling our story — it’s not being sensationalized when it’s not from a cisgender gaze.”

“‘The world has been led to believe that gender is a binary, and it is not. It’s a difficult conversation for most people, but it is the right conversation to have.'”

In alignment with Gender Proud’s mission statement, which centers upon “empowering marginalized transgender communities around the world, to advocate for their own legal rights,” Rocero offered an uplifting personal narrative while embracing multiple roles during the evening.

She began the narrative by educating us about the history of gender fluidity and gender binaries. She asserted that prior to colonization, many indigenous communities actually exalted gender-fluid individuals instead of condemning them. This aspect of history heavily impacted her growing up as a transgendered youth in the Philippines, which was previously colonized by Spain. For example, despite the prevalence and celebration of transgendered beauty pageants in her home country, LGBT individuals still faced a lot of ridicule and criticism.

Rocero provided vivid vignettes from her past, such as witnessing the colorful Spanish-inspired fiestas and transgender beauty pageants that were ubiquitous in her town. It was through these pageants that she saw a reflection of her potential self and was inspired to live her life as a woman. One pageant in particular was distinct because it symbolized the challenges that she would have to face for the rest of her life: After the winners were announced, the audience began protesting violently because the winner always won previous pageants and they thought the results were rigged.

Rocero’s encounter with transgender beauty pageants did not end there. She began participating in pageants as a teenager and made a livelihood out of them. In fact, the money she made from participating funded her transition. She acknowledged that compared to other transgendered people, she has been particularly privileged: She was able to express herself freely, was accepted by her family, had the opportunity to move to America to change her gender marker at a young age and supported herself modeling as a woman.

“’I think it’s a perfect metaphor for how I was going to live my life from that point on. Every time I would express (my femininity) it felt like the world was ready to tell me — to protest, that my femininity, my expression, my identity was not valid.'”

However, it was this same privilege that spurred her to make a difference. Stories of transgendered women committing suicide and getting murdered as well as the anxiety she felt about keeping her identity a secret compelled her to reveal herself. She elaborated, “And I knew that if I was going to risk my career it had to be big. It (had) to mean something — that for the first time I was owning (my) narrative as a proud transgender woman.”

Although it has been two years since she made her revelation on the TED stage, Rocero’s journey is not over. Her talk was a testament of her dedication to increasing exposure and understanding of the transgendered community as well as a rich development of her own narrative.