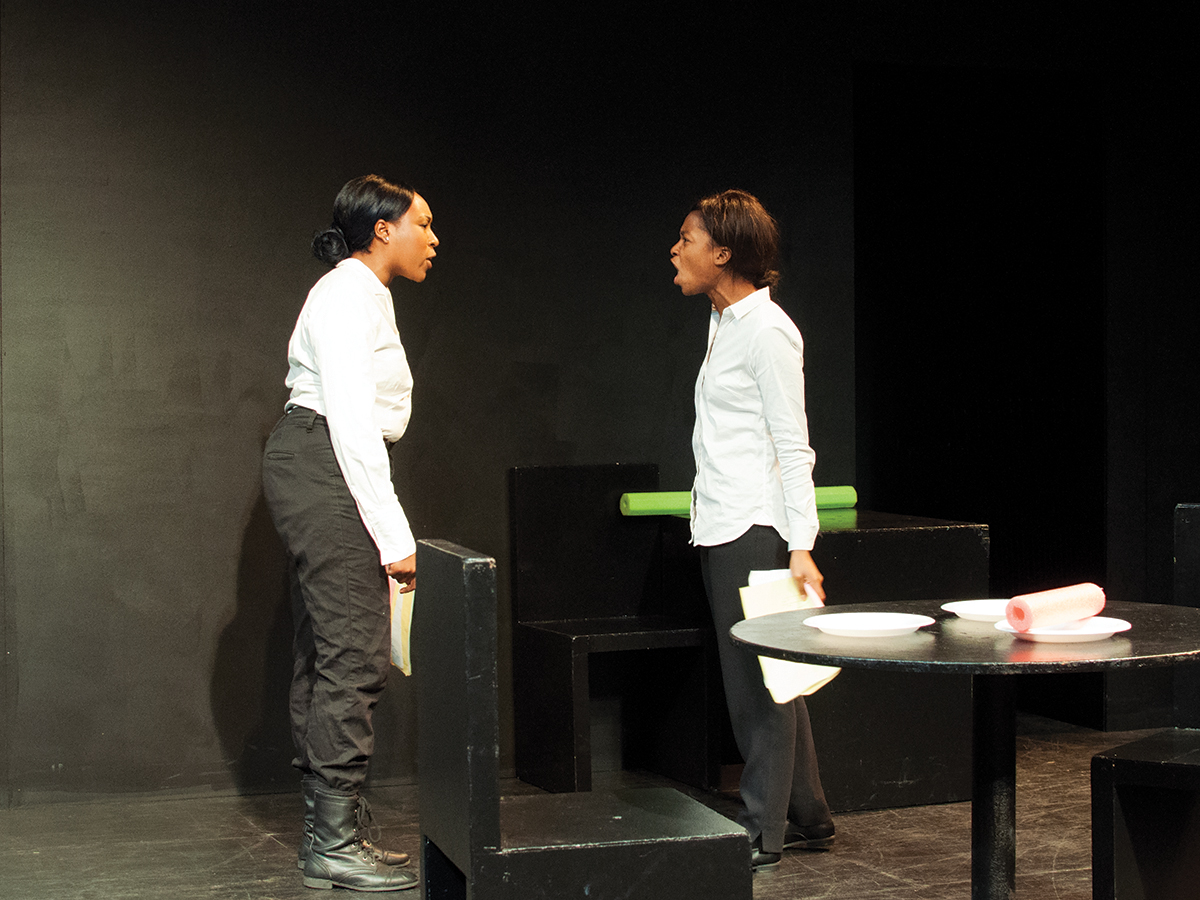 The UCR Department of Theatre, Film and Digital Production continued a strong season last week, May 25-28, with a four-day, rotating repertoire of works created by current students in the master’s in fine arts program for playwrights.

The works that were performed are still technically works in progress; although they were completed scripts, the authors still plan on editing and developing them. Also, the event was what is referred to in theater as a “stage reading,” meaning that the actors were not in full costume, there was minimal movement on stage and the actors all had their scripts in hand while performing their lines.

“The Trail,” written by Taylor Hatch, played on Wednesday and Friday night. Stage directions were read by Aniella Fields as she sat separate from the actors.

The play opens with Robyn (Amanda Sun), a young MMA fighter, stumbling into the camp of  Hal (Alvin Chow) and Peggy (Kara Malissa Grimes), who are two squatters living in a park. Miles (Josh Stephenson) is a successful lawyer who begins a life as a hermit in the park to escape the atrocity of the justice system.

The performances by the ensemble were incredibly powerful, given the fact that the main vehicle were their vocal expressions. The play was read with scripts in hand, and the stage directions read aloud. In order to compensate for the lack of actual movement, the actors had to recite their dialogue with as much emotion as possible. The standout performance was by Kara Malissa Grimes, whose rendition of Peggy’s larger-than-life attitude and character was masterful.

Overall, “The Trail” is a comedic, yet heartwarming story that will only get better when it becomes a full production.

The lineup for Thursday and Saturday included the titles “Tied to the Mast,” by Kirin McCory, “Mercy Meal,” by Chelsea Hickman and “Outpost Darj” by Joshua Rigsby.

Before the show began, the stage was scant with minimal set design. The floor tiles were a dark mocha brown, the walls and the few pieces of wooden furniture were painted black. The only preset props on stage were a few dishes, a throw blanket and a broom.

“Tied to the Mast” is a work that takes one of the oldest myths in existence, the Sirens, and shapes it into a contemporary thriller. It follows three sisters: Ray (Amanda Sun), Sug (Aniella Fields) and Tee (Ashley Hooks). The audience came into the play with a hint as to what the sisters are from the playbill which read, “women in numbers are always dangerous … I wonder what the sirens would’ve said about themselves,” but the women on stage seemed completely normal and unthreatening upon first look.

It begins with the three sisters and one unnamed man (Josh Stephenson) on a bench with his back to the audience. The oldest sister, played by Sun, chants a song containing the lyrics “sleep sailor sleep.” When he awakes, the sisters take turns questioning him. Throughout their conversations it is revealed that the sisters live a few miles from the nearest town, they do not own a phone or running water and are not used to visitors.

All of the actors gave impressive performances. The reading felt completely natural, even while they all read from scripts. Hooks, who played the youngest sister, had a particularly stunning presence on stage. At one point, she asked the man, “done anything bad in your life?” Shortly after, the sisters started to argue and the man attempted to stand from the bench, knocking back the blanket, to reveal that he had been chained to it the entire time.

The closing minute of the play left many audience members gasping. The three siren sisters closed in on the man as he tried desperately to escape, lulling him with their song to “sleep sailor sleep,” in a tone as haunting and mesmerizing as the sirens from Homer’s “Odyssey.”

The two characters in the next play, “Mercy Meal,” were called James and Natalie, and were played by Stephenson and Sun, respectively. There was one other person (Kara Malissa Grimes), stage left, to give stage directions and narrate as the play progressed.

This piece started a little slower than the previous, but soon blossomed into a captivating family drama that dealt with “the foreign and familiar … discovery and choices … doubt, faith and the purpose of life,” per the evening program.

Sun’s character, Natalie, is forced to attempt to reconcile with her alcoholic father after her mother has committed suicide. The tension arose from the smooth delivery of lines from both actors, who inhabited their characters splendidly.

Before Sun walks out on stage, Stephenson pours a small amount of alcohol into his coffee cup. It is revealed that they have a difference of faith — the father left the Mormon church and converted to Catholicism after the divorce. Stephenson tells (in a spot-on Irish accent), how him and his ex-wife met in Dublin at an Elton John concert, and as time progresses Sun decides to stay longer than she originally planned. Just as things are going well between them, the daughter discovers the alcohol in his coffee cup and the tension between them erupts.

As the audience realizes that reconciliation was out of reach, the details of their family history and events surrounding the mother’s death began to unravel. This heated moment was so well executed it felt absolutely genuine, making the low-concept family drama the gem of the night.

The final piece, “Outpost Darj,” per the program, was a science fiction imagining based on the true story of “Hiroo Onoda, a Japanese soldier stranded on an island, who refused to believe the Second World War had ended until 1974 when his former commander personally ordered him to stand down.”

The year is 2200, and the setting is a bunker on a deserted planet. Two UN soldiers (Kara Malissa Grimes and Susane Joseph) have been stranded for over three years without contact. One day, another person (Amanda Sun), crash lands near their bunker.

The drama that ensues after this incident puts the captain (Grimes) and the lower-ranking soldier (Joseph) against one another. They cannot agree on if the war has actually ended, like the stranger says, or if it has still been on and they have simply lost contact.

All of the plays in the festival had great strengths and were enjoyed by the audience. The writing and acting were impressive, and lifted the works far beyond the sparse setting of the stage. I’m sure all involved will go on to create many more impressive works, in theater or elsewhere.