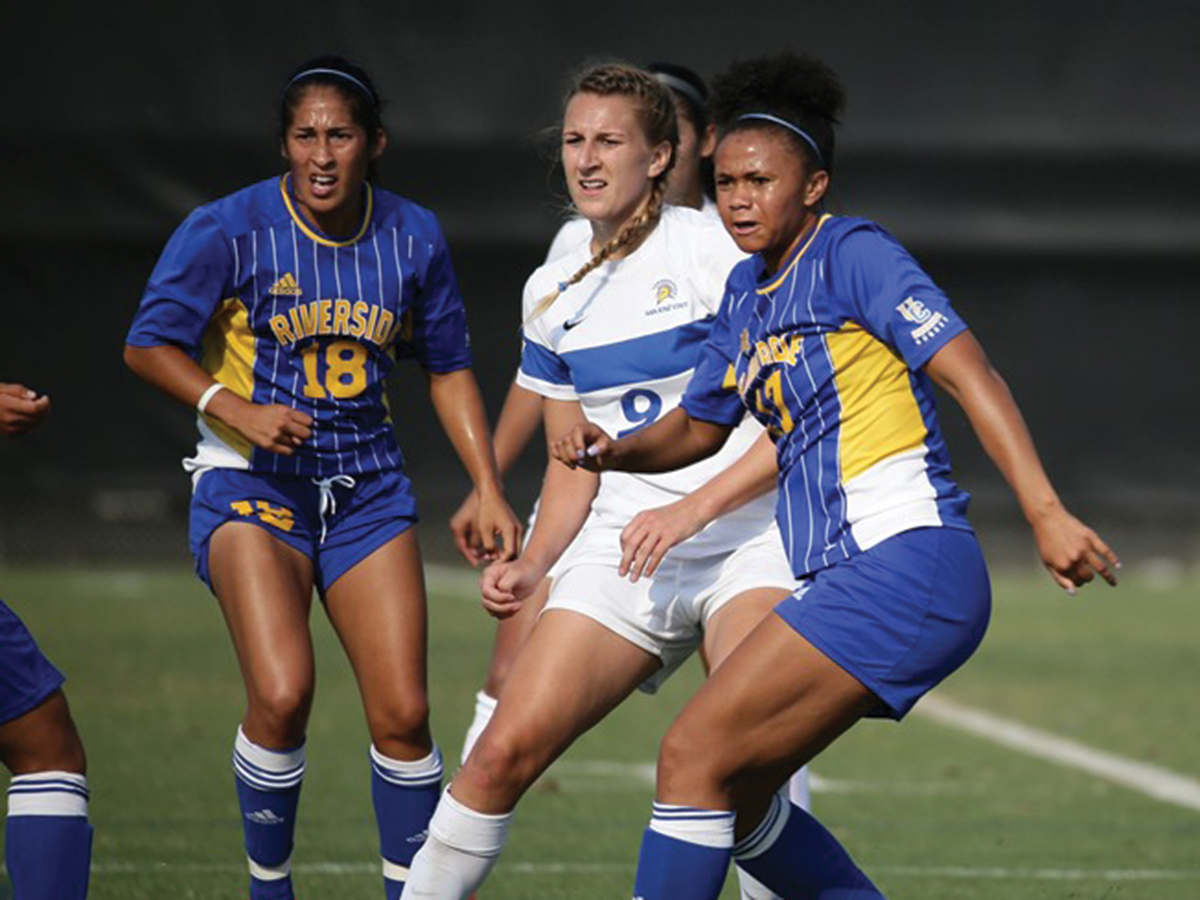 Long losing streaks can derail a team’s confidence and ruin their chemistry, but the UCR women’s soccer team has taken it much differently. Despite a rough stretch that has only seen them score four goals since their last win — a 3-0 victory over the University of Houston on Friday, Sept. 16 — some of the first words that sophomore midfielder Quinley Quezada spoke to me were those of confidence.

“We’re still in this,” she insisted.

Senior forward Tayler Dragoo — who transferred from UCLA following their NCAA Championship victory in 2013 — showed that same optimism but with a hint of urgency.

“Well I don’t think the season has gone exactly the way that we wanted it. But we’re still figuring it out,” Dragoo said. “We still have four games left and we’re going to do whatever we can to change it around as much as we can. We need a win, and we all know that.”

In many cases, one can benefit far more from rationalizing and learning from the sting of defeat rather than in the joy of victory, and Dragoo believes that experiencing both this season has improved the team’s mentality.

“I think at the beginning of the season we … I don’t think we really knew what we were getting ourselves into, and so I think definitely as time has gone on we’ve matured. The mentality has gotten better every game and we’re growing as a team,” Dragoo said. “It’s hard getting new players to come back into our system, so every chance and every game we’re getting better and better and hopefully our mentality only gets better.”

It has been difficult at times for this team to adjust after losing several key players from last season, but both Quezada and Dragoo have stepped up to the plate this season to keep the team focused and motivated.

Dragoo is a leader by nature, and she was more than ready to step up to the role when the time came. “Well, I’ve definitely tried to step up and be as much of a leader as I can be. Growing up, I always took on that role, but last year’s class had (people in big) roles already, so a lot of us had to step up this year,” she said.

She embraced the role in stride, leading the Highlanders with four goals on the season after taking only four total shots all of last year. “All I wanted to focus on was just to make sure to be the leader that I can be and not only lead by being vocal, but (lead) by example; that was my biggest thing,” Dragoo insisted.

“Hopefully if my teammate sees me working hard and making a hard run, maybe that will motivate them to be the one to make a hard run the next time or get into a hard tackle. So definitely just wanted to make sure that I could step up for the team.”

Quezada is another player that has had to answer the call. Only playing eight games and taking two shots as a freshman, Quezada is second on the team in goals and has appeared in 14 of 15 games for the Highlanders this season. She, too, understood the need for individuals to step up following the graduations of Tyler Cunningham — who was the leading goalscorer for the Highlanders last season with seven — and Alexa Bustamante, who scored three goals in her senior season.

For the young midfielder, this tough stretch and the season in general has been a valuable learning experience in understanding her role as a leader on both current and future Highlander teams.

“Well I learned that being a leader doesn’t necessarily mean telling everyone what to do or to coach them. Sometimes being a leader is doing the best that you can do and working hard so that when someone else sees you working hard, they want to match that level of intensity that you have.”

She went on to explain that, “I just learned that no matter what your role is, whether you’re playing or you‘re on the bench, you still have an important role; you can still be a leader. It’s not just the 11 that (are) playing, it’s everyone that has an impact on our team.”

Dragoo also believes in the importance of a collective team effort, and stresses the necessity of keeping focused for the rest of the season, both in practice and in games. She knows that the team has the talent to win, and it starts with approaching practices with focus.

“I think our biggest thing right now is our mentality, so we have to go into every practice being mentally turned on, engaged and locked in and, when we do that, we are such a great team and we have such great potential,” Dragoo said.

For Dragoo, the team’s struggles can be alleviated by improving in a common area that often differentiates the great teams from the good ones: Consistency.  “It’s just being consistent,” Dragoo said. “As long as we can be consistent in going into practice with a good mentality — a winning mentality — we’re a great team. It’s just the consistency we need to work on.”

As for the rest of the season, the goal is pretty clear.

Dragoo echoed that sentiment. “We’re so close. You can look at the standings and you can look at the scores but if you watch the games and if you’ve really been with us the whole season, you can see how close we are and how much we are just striving for that win.”

With four games left and a Big West tournament ahead, anything can happen for this team, who have already proved that they can hang with the best, giving then No. 8 Texas A&M a scare in College Station, Texas. It’s just a matter of putting it all together.