Last weekend, over 450 students, techies, computer nerds and others gathered at Winston Chung Hall to immerse in the versatile world of hacking at Citrus Hack’s annual hackathon, a large-scale event coordinated by various sponsors such as UCR’s student organizations Association for Computing Machinery (ACM) and Institute of Electrical and Electronics Engineers (IEEE). Challengers were given 36 hours to create a project of their choice and present it to a panel of judges consisting of representatives from technology companies, UCR professors and teaching assistants, who would grade based on an undisclosed rubric of criteria. About a dozen teams competed for the first-place prize of Citrus Hack, as well as an onslaught of outside awards from real tech companies and grants, but in the end, only one contestant prevailed for the first-place title: Spyridon Catechis, first-year electrical engineering major.

The astonishing aspect about this win was that prior to the hackathon, Catechis had very little practice with hacking.

Upon entering college, Catechis only knew that he was good at math and science, but didn’t know too much about electrical engineering. Having a motivated mindset, he set out to get as involved as he could in the field of engineering.

“The first few weeks of school I pretty much went to every electrical engineering club to see what I wanted to get more involved in. One of the guys who attended all the meetings encouraged me to join Citrus Hack after one of the meetings because he did it his first year and he learned a lot,” Catechis explained.

From there, he came up with a concept involving infrared LED’s and began asking around for several weeks of advice to attain the idea in his mind.

“I just researched every aspect of it, like the circuitry and programming and hardware to connect it to the inside of the remote control. And then I ordered it all out and ordered the drone and it arrived the morning of Citrus Hack.”

Once he was at Citrus Hack, he just had to make it. 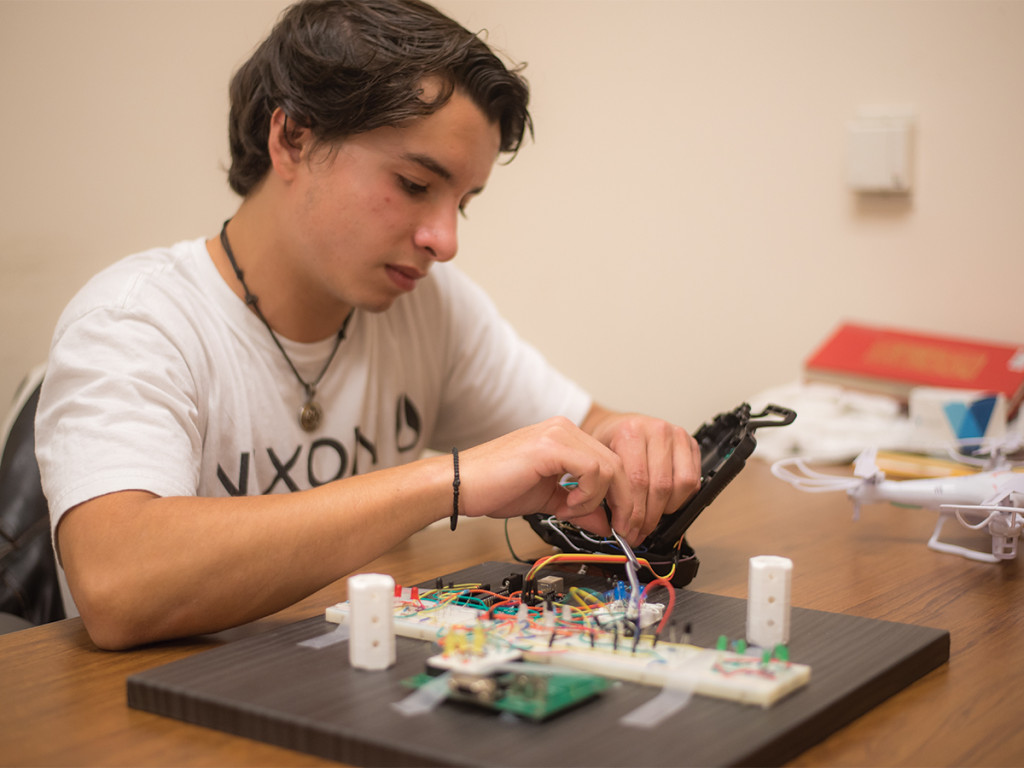 Staying up all 36 hours required a lot of diligence, as Catechis attests he didn’t sleep until 7 a.m. on Saturday, then continued the day with only a few half-hour naps in between. He also claims that he ran into many technical problems, such as having the battery of the drone only last seven minutes and it taking an hour and a half to recharge. “So the last 12 hours was me waiting around every hour and a half to do seven minutes of testing to calibrate stuff,” Catechis explained.

However, the progress he made along the way served as motivation for him to keep going and served as a signal that everything he was doing would bear fruit in the end.

Catechis claimed that his concept was unique because some people suggested that he could fly a drone using an iPhone or some other form of an app. But with his invention, the user could control the machine simply by the movement of their hand. He also observed that many of the other projects were software-related but believed the judges might have been impressed with simply seeing his hardware creation. “Just the overall aesthetic and having it there might be more pleasing,” he said.

As it turned out, most people did not even finish their projects, and with a fully-fledged 3-D accessible drone in his hands, Catechis took home the first-place prize.

“I came into college with the mindset that you can do a lot and you can build anything if you just put your mind and time to it. Citrus Hack came along and I was actually able to come up with an idea, do it, have it work, have positive effects afterward — get not just prizes, but the belief in me that I can accomplish it. So now I can move forward knowing that it’s for sure true and it’s not just an idea.”

[pullquote]Citrus Hack came along and I was actually able to come up with an idea, do it, have it work, have positive effects afterward — get not just prizes, but the belief in me that I can accomplish it.[/pullquote]

As an ending note, Catechis also wanted to credit his girlfriend, Alexis Illich, a first-year environmental engineering student, for assisting him during the hackathon. “She wanted to learn a lot so I tried teaching her the whole way through while she helped me with what I didn’t have time for.”

While Catechis for the most part performed solo in obtaining his end goal, Los Hackers was a team endeavor that not only had to aim for a final product but had to learn how to cooperate as a group as well.

Each member came from a different background, as Nava had competed in seven hackathons before and Correa five, while this was Barreiro’s first-ever time participating in such an event.

However, they were lucky, as they were able to embrace their differences and excel as a team.

“This is the first time all four of us worked together because each of us have a niche where we are proficient. The four of us filled each of our individual roles and it worked really well,” Barreiro observed.

During the hackathon, it was crucial for them to not only stay focused but spirited as well. Nava shared, “I would call team meetings. Every time I saw us floating away I would call ‘Team meeting!’ and we would talk about progress, where we were at and talk … The last meeting we had was at like 2 a.m. and I said, ‘Guys, we just have six more hours and we just have to push, push, push!”

What they ended up with was FPV Battle Bot, which was a virtual reality headset in which you could watch two bots battle each other head-to-head so you get more of an immersive experience.

This is the first time all four of us worked together because each of us have a niche where we are proficient. The four of us filled each of our individual roles and it worked really well

As Emilio detailed it, “It’s like a first-person-view Battle Bot.”

Like with Catechis, Los Hackers successfully endured to finally acquire a completed project, which Nava said was their ultimate goal — “a demo-able product.” They also believed that the judges may have taken into consideration aspects apart from the product itself, such as teamwork and dedication.

“Each of us equally had a real interest and strong passion for completing it. I think they could tell in our enthusiasm that this was a project we were really dedicated to, both through how we vocalized it and our final product,” stated Barreiro.

Nava added, “I think they could see that when everyone else was sleeping while we were still up.”

What they ended up with was second place overall and the most innovative award from Equippovision, which also granted them a $1,000 check along with an opportunity for a larger grant of $10,000 if they could turn the FPV Battle Bot into something bigger, like for entertainment or militarial use.

Aside from the monetary endowments and notable grants, they also “took home knowledge, something you can apply for in the industry once you graduate and hopefully encourage the younger generations to learn about this too,” shared Nava.

Correa concluded, “I think for me it was definitely the great learning experience learning from a more experienced person because we were doing a lot of things I had never done before. In terms of team organizations, doing those different things helped me progress … It taught me how to speak to your team and organize.”

Not only were they able to learn how to organize a team and speak with others, but like Catechis, they left with the knowledge that they could obtain their ideas no matter how far-fetched it may seem at first.

Barreiro also shared that upon entering the contest, the team didn’t necessarily believe they would rank in the first or second place but were confident that they would be successful.

“I think this hackathon has shown me our ideas were really doable. I was intimidated before it and when they were talking about the project idea, I thought, ‘He’s lost it.’ But then once we got there and slowly started building on our own task, we learned each of us was our own element of the team that was very needed. It’s shown me you can learn so much from a hackathon. I would vouch for anyone who wants to do the hackathon because I learned even more than I expected to,” reflected Barreiro.

Editor’s Note: This article has been lightly edited after original publication to correct factual inaccuracies about the event’s date and number of participants. The Highlander regrets the error.