The only objective on behalf of Bliss and Wisdom?

“To let people express their gratitude to those they love … and to encourage happiness through gratitude by doing small things like these,” shared Mike Shih, an advisor for BWI at UCR.

Every Wednesday, UCR students are accustomed to seeing numerous student organizations host stands near the Bell Tower to promote their own causes. It’s usually the same ordeal every week — club officers or volunteers wait to be talked to or stand up to hold signs and shout catchy slogans, then students approach them and hopefully walk away with a better understanding of the organization.

On Wednesday, Nov. 16, however, something extraordinary was going on.

Not only was Bliss and Wisdom International (BWI) tabling for a reason besides solely informing students about their cause (or at least, that was not the main reason, for some students were still curious about it), but they were also going out of their way to provide a range of different cards, colored markers, cute stickers, ribbons and other decorations for students to write their own “Thank You” cards to friends, family members and anyone else they wished to address. They even handed out free, organic and vegan snacks for anyone working on a card or walking by to indulge in before heading back to class or continuing on with their busy day.

… they were also going out of their way to provide a range of different cards, colored markers, cute stickers, ribbons and other decorations for students to write their own “Thank You” cards to friends, family members and anyone else they wished to address.

All of it was free, including the mailing (which BWI generously decided to pay for entirely), and open for all students to participate in, with the coordinators even allowing people to write more than one card. The only objective on behalf of Bliss and Wisdom?

“To let people express their gratitude to those they love … and to encourage happiness through gratitude by doing small things like these,” shared Mike Shih, an advisor for BWI at UCR.

Bliss and Wisdom International was founded in 1992 by Late Venerable Master Ri Chang, a Buddhist monk from Taiwan who believed that the only way we can heal a world corrupt with violence and cruelty is to cultivate a kind-hearted community. He believed in doing so by educating community members on topics such as health and the environment and engaging them in various cultural activities.

One of the activities that BWI promotes every year is the Mother’s Day Card Event, which accepts card designs from students around the globe and are distributed to multiple campuses that have BWI on their campus.

According to Shih, the Mother’s Day Card Event spread such a good-hearted message and has been a success since the club opened at UCR eight years ago that the club decided to expand the event to Thanksgiving week as well.

Maggie Lee, president of UCR’s BWI, stated that most of the letters that she has noticed have been sent to parents as well as grandparents, and when observing the reactions of the card-writers, she realized, “We are spreading positivity and happiness to our fellow students by doing something simple like this.”

Another advisor, Jessica Kuo, delightfully stated, “Everyone writing the cards are happy and full of positive energy.” When discussing the people who she thinks may have appreciated the “Thank You” card event the most, she added, “It helps those who are far from home. Their families get to know how they’re doing because we also take Polaroid pictures of them with their cards.” A Polaroid camera at that the card-making station was offered by which students could take a picture of themselves holding their card and include the instantly printed photo in their envelope. 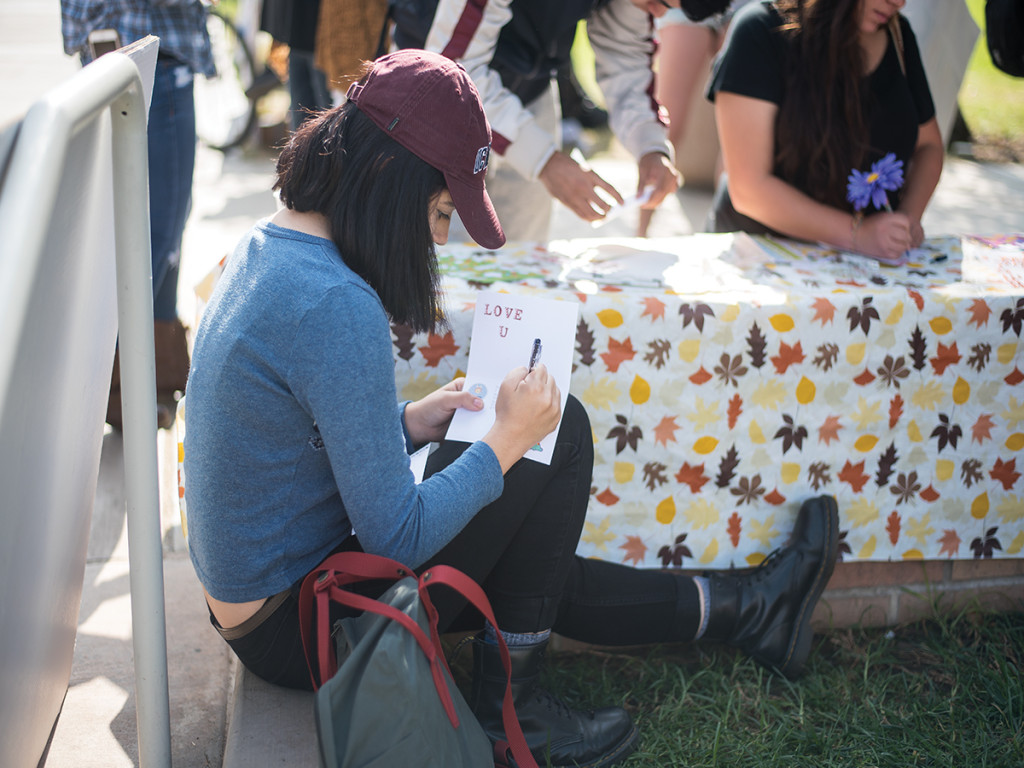 One of the students leaning over the table and contently scribbling in a card was second-year computer science major Melissa Chou, who wrote to her sister who goes to school in Santa Barbara. She revealed, “I don’t get to see her that much and sending her a letter is different than emailing her.” She also mentioned that she was not sure if she would see her sister this Thanksgiving, so sending a handwritten card to her would at least let her know that she was thinking of her during the holiday season.

Another card-writing participant, third-year psychology major Rosie Castro, who wrote a letter to her grandmother, shared, “I feel like she has always been there for me and with college always being busy, I don’t get to see her that often. A letter is more personal and grandmas are suckers for letters.”

‘It gives a nice feeling on both sides, not only to those receiving the letters but those writing them as well.’

Castro also held a card for her sister, who she said is in college as well and also really busy. “This is a nice gift for her with college being so stressful,” she stated.

Commenting on the letters and their impact altogether, Castro reflected, “I’m excited to see how my grandma and sister react. People don’t send cards very often.”

Until 3 p.m. on Wednesday and again on Thursday, Nov. 17, BWI accumulated dozens of smiles on behalf of students who walked away from the stand with a freshly written letter in their hands or turned into one of the BWI officers to be mailed, knowing they had expressed their gratitude in some way. “It gives a nice feeling on both sides, not only to those receiving the letters but those writing them as well,” voiced Lee. By allowing students to send messages of appreciation to loved ones both near and far, BWI also sent a message — one that was addressed to the world, stating that all it takes is one letter of thanks to someone else in order to greatly acknowledge the amazing blessings we have in our lives.