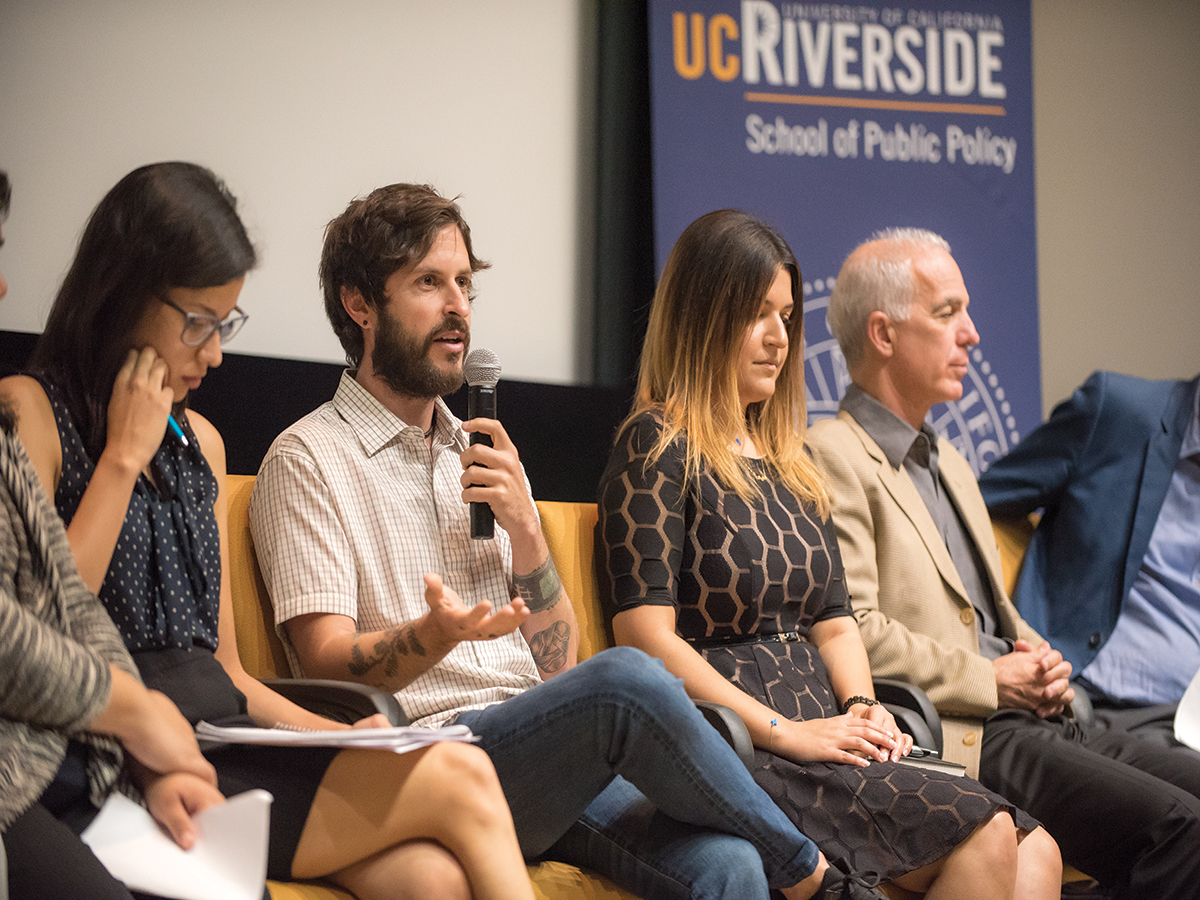 On Monday, Nov. 14, UCR’s School of Public Policy (SPP), Chicano Student Programs, Middle Eastern Student Center and Undocumented Student Programs joined together to host a campus forum entitled, “The Presidential Election and Its Implications for Disadvantaged Communities” in INTS 1128 from 12-1:30 p.m. The event aimed to foster discussion amongst students, faculty, staff and community members about how Donald Trump’s presidency will impact the country.

Associate Dean of the SPP and Professor of Public Policy and Political Science Karthick Ramakrishnan moderated the event, which focused on three themes: Immigration policy, race relations and health. Each panelist was given a few minutes to summarize the specific changes they expected to see in their area of specialization.

Francisco Pedraza, a public policy and political science professor, began with a brief insight on immigration. Pedraza stated that while there would be an emphasis placed on immigration policies by the federal government, subnational governments such as state and county governments also would take part in passing laws in relation to this topic. “Now, if anyone has heard — whether it’s on the left or the right side of the political spectrum — people say, ‘I know exactly what he’s gonna do,’ I want you to take those kinds of statements with a caution, because we don’t know what he’s gonna do,” Pedraza proclaimed. He ended with words of encouragement saying, “The members of communities who are interested in policy reform do not have to accept whatever the proposals that President-elect Trump lays down.”

Following Pedraza was Associate Professor of Public Policy Cecilia Ayon, who has experience in studying immigration enforcement and race relations, and its impacts on families and communities. Ayon described the types of questions that may come to mind in association with an increased fear of the unknown such as, “Will I be deported? What will happen to my children if I’m deported? What will happen if my parents are deported?” She also described the increase in instances of discrimination and explained it could negatively affect the health of those exposed to it in forms of social isolation, as well as symptoms of anxiety and depression.

Ana Coria, program coordinator at undocumented student programs, then spoke about how students should be aware of deferred action for childhood arrivals (DACA) and that students who have not applied for it should not, since it is unclear if Trump will revoke it. She also elaborated on how immigration policy changes are uncertain and that, “The number one way to prevent deportation is to know your rights, to know what to do when an immigration officer does come to your house.” She closed by advocating for the idea that all UC campuses should be made sanctuaries for undocumented students.

Professor of Public Policy and Political Science Benjamin Newman then discussed the upticks in acts of hatred and behavior in relation to race, religion and “other markers of difference.” Newman described a study performed amongst himself, Ramakrishnan and other faculty in the SPP over how rhetoric such as that spoken by Trump, may encourage “racist Americans to feel emboldened to express their prejudice.” In combatting the acts and behaviors described earlier, Newman encouraged the pressuring of police into creating a zero tolerance policy environment for these types of behaviors. “As a university and as concerned citizens, we can think about how we can pressure local authorities to send that condemning signal,” Newman concluded.

Tina Aoun, director of the Middle Eastern Student Center (MESC) spoke next and described the sentiment within MESC after Trump’s victory, indicating that there are very mixed responses amongst students, with 40 percent of students saying they would support the president-elect and the other 60 saying they would not. “After terrorist attacks, whether they’re locally or abroad, Muslims in hijabs, members of the Sikh community in turbans, men with beards and dark skin, they are the first to be targeted. Whether it’s hate, bias and discrimination, or it’s vigil attacks and point-blank murder,” Aoun elucidated. “It happens in our community, and in fact, the Council of American-Islamic Relations, also known as CAIR, they’ve already reported that post-election climate is worse than post-9/11 climate for some Americans.”

Professor of Public Policy and Economics Bob Kaestner spoke afterward on the effects Trump’s presidency may have on the accessibility of health care. He cited the Affordable Care Act as a landmark legislation, despite only having a positive impact on around 10 percent of Americans. “Donald Trump, although you don’t know what he’s really gonna do is on record, he wants to repeal and replace (the Affordable Care Act),” Kaestner explained. He then described how there may be a shift from health insurance exchanges to a tax-based system in which a credit would be made to income taxes, allowing for a certain amount to be used when buying health insurance.

Bruce Link, a distinguished professor of public policy and sociology, closed the panel statements by discussing health in relation to social circumstances, saying it “could be your education, your income, whether you’re exposed to racism.” He then described “structural stigma,” which includes policies that may oppose disadvantaged groups and create a climate of animosity to members of that group, which can negatively impact their health. Link ended by saying that although this stigma and its adverse effects may occur, it is not entirely out of our control.

The discussion was followed by a Q-and-A session open to the audience.

An audience member named Kevin, who identified himself as a student organizer asked, “As you said, there’s a lot of students organizing on campus — some of them are pushing for policy changes in our university. When we’re doing that, what should we have in mind?”

To that Aoun replied, “It’s not just say the complaint, but have a solution that’s tangible.” She continued by describing the importance of properly organizing and finding allies in both campus administration and the community.

The next SPP event will host former California Senator Joe Dunn for an event to be held next quarter on Thursday, Jan. 12.