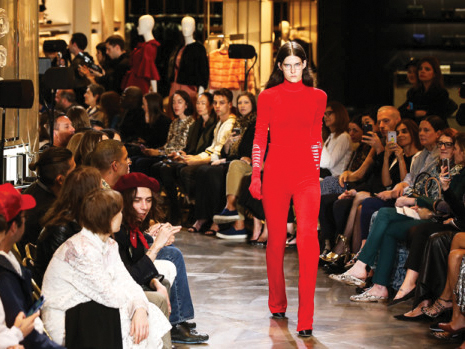 Every year creates a new possibility, with trends falling out of style, or certain styles coming back in. Last year was the year streetwear hit its stride in terms of market growth, with smaller fashion outlets such as Vetements and Anti-Social Social Club gaining serious traction as purveyors of serious fashion. Here are some fashion trends and phenomena we are looking forward to in the upcoming year:

While the metal band graphic tee had been gaining traction for a few years, in the previous year it became the dominant graphic shirt trend. The pervasiveness of Slayer or Metallica shirts vastly outgrew the actual musical market for metal music, begging the oh-so-hipster question: Do people even listen to these bands?

This style became even bigger when Justin Bieber’s Purpose Tour merchandise dropped; designed by Jerry Lorenzo and taking style cues from the metal aesthetic — even now, this aesthetic remains the most important touchstone for Lorenzo’s Fear of God label. However, as any style boom and bust style, it’s time for this style to be laid to rest. The reality is that this trend is super gimmicky and imitative of a subculture which is so antithetical to trendy fashion. Moreover, where this has become so ubiquitous and boring, I can only see designers and tastemakers moving toward a different aesthetic.  -Faraz Rizvi, Arts & Entertainment Editor

Ten years ago, bright pink Juicy Couture track suits for women were ubiquitous. Everyone from Britney Spears, to Paris Hilton and Kim Kardashian were rocking these day-in and day-out. Once this trend died, many thought it was one of those that just wouldn’t come back again.

Of course, in the world of fashion it’s always these types of trends that come back with a vengeance, and when French label Vetements announced an upcoming collaboration with Juicy Couture, the fact that this trend would be significantly bigger was consolidated. Look forward to seeing these around in 2017! –Faraz Rizvi, Arts & Entertainment Editor

3. The decline of SLP Boots

So the years of every celebrity wearing SLP boots have gone by with the departure of Hedi Slimane. The audience loved SLP’s maximalist and extravagant style, and it seems the thirst for eye-catching outfits has not been quenched yet. Take Gucci for example. Led by a new creative director, Alessandro Michele, Gucci received a very positive response with their new collection which consisted of many bright colors, excessive embroidery and combinations of interesting patterns. And it is no surprise that both SLP and Gucci are owned by the same group: Kering. There is no doubt the younger generation drives the trend, and they want to make a statement. Pink hoodies, jackets with statement phrases and floral patterns are everywhere. -Cy Bae, Contributing Writer