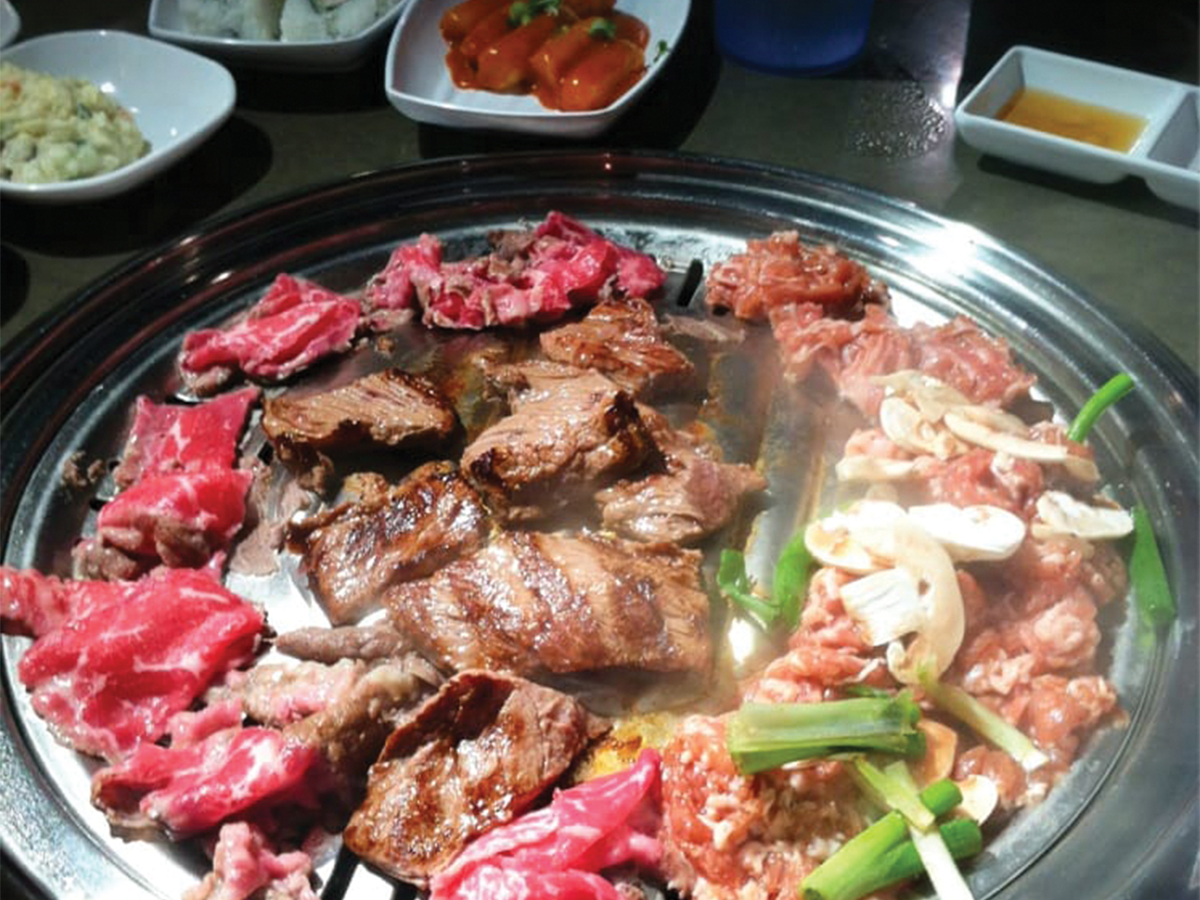 On a rainy, Wednesday evening, with growling stomachs, a few friends and I decided to eat at Wang Cho, a conveniently located Korean barbecue restaurant in Riverside Plaza. Prior to its opening, the closest Korean barbecue places in the area were Koreana Grill BBQ Buffet in Riverside and Gen Korean Barbeque House in Corona.

Upon entry was a black hostess stand to the right and a black bar with counters full of colorful bottles of liquor for those who didn’t have quite the same appetite as my friends and me. Immediately we took notice of the cleanliness of the restaurant, even with the scent of oil lightly wafting through the air. We were seated shortly after our arrival at a table with our own grill in the middle of it as well as a big vent above.

Already on our table sat a series of primarily Korean-inspired side dishes, including light-green pickled cucumbers and shiny stir-fried glass noodles in small, boxy and white-colored dishes. Our server quickly took our first round of many orders including the brisket, marinated boneless beef, bulgogi and bottle of Charm Soon soju.

The music in the background perfectly matched the demographic expected to be found within the walls of a Korean barbecue restaurant, primarily consisting of electronic dance music at a volume in which the song lyrics could be made out but not so disturbingly loud that you couldn’t hear your friends speaking to you from across the table.

Although not all of the meat turned out as successful as planned, the ambiance and service contributed to our overall positive experience.

As we were cooking our first batch of meat, our friendly server playfully encouraged us to take shots of the shared bottle of clear soju. Right afterward, our meat was fully cooked and we chowed down. The meat was absent of the shreds of white fat sometimes seen on brisket at other Korean barbecue restaurants and paired perfectly with the brisket sauce and dduk bo ssam, which is an opaque, squared-shaped rice paper, provided to us. Next we tried the marinated beef, which, when fully cooked, lacked the flavor that would have been expected of a marinated meat

The bulgogi, or grilled marinated beef, was next, making a complete 360-degree turn away from the meat we had previously gobbled down. Unlike the marinated boneless beef that we grilled ourselves, the bulgogi was packed with savory flavor, perfect for eating with rice to help absorb the almost-too-strong combination of sauce and spices.

For the next round, we ordered spicy rice cakes, tofu stew and more brisket. To those with a high-tolerance for spicy foods, the rice cakes could easily be handled. They were soft and chewy, as would be expected, with a flame that didn’t quite burn your mouth unless you ate up the entire plate. The tofu stew, which contained small chunks of tofu in the bright, red soup, was a little strong with a sour flavor.

Our other rounds consisted of the same types of meat we had previously ordered. After grilling two plates of meat, the grill would quickly become dirty and black with hints of burnt meat. The servers were very on top of the service, promptly noticing when our grill needed to be cleaned.

In our final round, we ordered the sausage, garlic chicken and another plate of brisket. The sausage was disappointing because it ended up being just regular, processed sausage that you could find at any grocery store. Alongside the sausage, the chicken ended up taking a while to cook and was not very flavorful once it was well-done.

In retrospect, the first few plates had been savory and filling, but after a certain point we began to feel the dreadful sense that our stomachs were running out of capacity. Despite the numerous other items to choose from on the menu, none of us were daring enough to try dishes such as veal gutt or marinated large intestine.

Although not all of the meat turned out as successful as planned, the ambiance and service contributed to our overall positive experience. In terms of meat, the best bet for anyone visiting for their first time would be to go with the brisket, marinated boneless beef and bulgogi.