Torrential downpours throughout Southern California this past weekend rendered movement anywhere in the Inland Empire and Orange County Area a herculean task. However, these conditions seemed to go practically unregistered by the thousands of attendees of SOULQUARIUS music festival at the Santa Ana Observatory Grounds on Saturday, Feb. 18. While the Observatory has hosted festivals before, such as Beach Goth in October, this festival was the first festival catered toward soul music, with a stacked lineup: Headliners featured R. Kelly, Erykah Badu and Jhene Aiko, while other artists in attendance included DMX, The Internet and The Dream among many other notables.

While the festival was bogged down by an element of disorganization — set times were behind schedule and last minute scheduling errors abounded and only one way of entrance caused for a line which extended to mind-boggling lengths — the entire event was a phenomenal curation of essential soul music and hip-hop. While it was impossible to make every set, The Highlander team was able to attend some of the best of the sets. 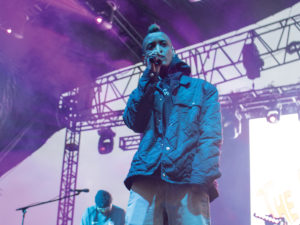 Associates of the Odd Future collective which spawned artists like Frank Ocean and Tyler the Creator, The Internet has been brewing up bluesy, downtempo instrumentals with lead vocalist Syd Tha Kyd’s R&B vocals. The Internet’s latest project, “Ego Death” released June 2015, was met with significant critical acclaim. More recently, however, Syd released her debut solo album, “Fin” in early February — while the verdict is still out, this project was eagerly anticipated by many fans and added to the excitement for the band’s performance.

The Internet’s set started quite later than the initial set time due to technical difficulties, and the Soulquarius stage — where the band was performing — was already about an hour behind in the schedule, creating a restless atmosphere among attendees. However, the crowd was understandably ecstatic when Syd finally began singing the words to one of their hit songs, “Special Affair.”

The highlight of the performance was when Steve Lacy, longtime guitarist for The Internet performed original music from his upcoming album, which releases on Friday, Feb. 24. His music was lyrically introspective yet a slight departure from the brand of contemporary neo-soul that The Internet has been pioneering for the past few years. Syd also treated concertgoers to the track, “Know” from her new album, further highlighting how well each of the band members are branching out individually. Unfortunately, the talented vocalist informed the crowd that their time was being cut short, prompting the band to perform one of their most popular tracks, “Girl.” Despite unforeseen circumstances, The Internet gave a solid and thoroughly entertaining performance that proved to quell the frustration of the crowd.

BJ kept “Turnin’ Up” his performance without any signs of toning down his energy during an unforgettable set. Kicking off his set, BJ’s full band,revved the crowd up with the an instrumental version of “Turnin’ Me Up.” After a minute of musical euphoria, BJ took the Observatory stage singing one of his top singles, “Man Down,” sending the crowd into a flurry of cheers.

BJ’s vocal performance not only exceeded his studio luster, but his stage presence engaged the crowd with the equal captivation. As he sang through “Man Down,” he carried his mic stand to all corners of the stage, dancing about and reaching out to his beloved fans. Taking the crowd by surprise, BJ even played a personal drum set during the breaks between his lines.

BJ The Chicago Kid went through his popular songs including “Church” and “Love Inside,” and performed his new, luscious guitar-driven single, “Roses,” which was already a crowd favorite. Through an all-around enthralling performance, BJ, whose career continues to gain momentum, provided a powerful, affirming statement that he is not slowing down.

Does DMX really need any introduction? The legendary rapper initially seemed like a curious choice for a festival curated around soul music, but his performance of hits brought some serious energy to an otherwise laid-back festival atmosphere.

Arriving on stage late after leaving the concert grounds for a few hours, DMX emerged with a massive entourage and opened with the classic banger, “Rough Ryders’ Anthem,” stirring the crowd to excitement from their restless state. DMX held nothing back as he jumped around stage in classic, unrestrained DMX fashion, climbing and performing upon a 10-foot amp, souring the crowd into a frenzy.

As DMX moved from one hit song to the next, the crowd was thriving with energy, which served as a relieving departure from the largely downtempo nature of the festival. As he rapped the 2003 hit “Where my Hood At,” the entire crowd yelled along in response.

While an older hip-hop artist, DMX asserted his relevancy and brought a significant amount of heat to the festival, complete with an iconic growl and unrelenting energy.

Donned in grey and white army pants and black combat boots, R&B songstress Jhene Aiko graced the Soulquarius stage. Beginning with her track, “Stay Ready (What A Life)” Aiko entertained the crowd with smooth and solid vocals that never appeared to waver. The 28-year-old kept her set diverse, mixing smooth ballads such as, “new balance” with some of her most famous upbeat songs like, “Bed Peace.”

It was easy to spot the most dedicated Aiko fans amongst the crowd, with some attendees singing almost every song word for word. This was especially true during her performance of her hit song, “The Worst.” The LA native also treated the audience to unreleased material, causing concertgoers to immediately raise their cell phones to capture the footage and shout in approval.

“Are there any freaks in the crowd tonight?” Aiko asked before moving on to her newly released, seductive track, “Maniac.” She moved throughout her set with impressive fluidity, transitioning to a cover of Young Thug and Travis Scott’s, “Pick Up the Phone” immediately after an original track. Aiko closed up her allotted time by singing her feature on Omarion’s hit song, “Pose To Be” much to the audience’s delight. Attendees continued cheering as she began making her way off the stage, reiterating the fact that the skilled vocalist put on an impressive and memorable show.

Arguably the most anticipated performer of the evening was none other than Erykah Badu. Arriving onstage shortly after 10 p.m., Badu’s presence prompted many concertgoers who were elsewhere within the venue to come rushing to the larger Soulquarius stage. Badu’s stage set was complete with a pianist (not a synthesizer), a guitarist, a full drum set equipped with silver chimes and background chorus singers mimicking Badu’s eccentric personality and subtle movements.

Adorned in gold jewelery covering her chin, fingers and arms, Badu was a perfect metaphorical expression of her music. Badu began with the song, “Hello” from her 2015 mixtape, “But You Caint Use My Phone.” Badu’s vocals didn’t fail to impress, captivating the audience from start to finish and sounding just as astonishing as they do in studio versions.

Badu made sure to interact with the crowd throughout her set. “Where are all my 80s babies at? My 90s babies?” she yelled, while concertgoers screamed with excitement. “What about my 70s babies?” she asked, inciting a smaller response. “Oh, they at home. OK,” she joked. Badu proceeded to perform some of her biggest hits such as, “On & On” and “Out My Mind, Just in Time.”

Apart from many of the performers throughout the night who moved across the stage, Badu stood stock still, singing with her luscious vocals from the center of the stage. What was most surprising was the sheer amount of stage presence Badu maintained almost effortlessly. Her set moved between her most famous songs, which were cheered on by the audience of festival goers alike.

SOULQUARIUS was the first festival of its kind in the Orange County area, and for the scale of its attendance, this event was well worth enduring the cold and potential rain for. While logistical issues abounded throughout the festival, the entire event was a solid curation of essential soul music and an intriguing debut. 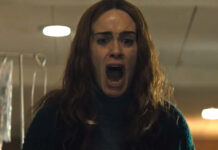 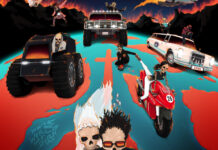 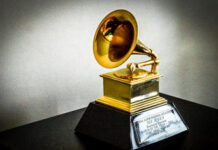