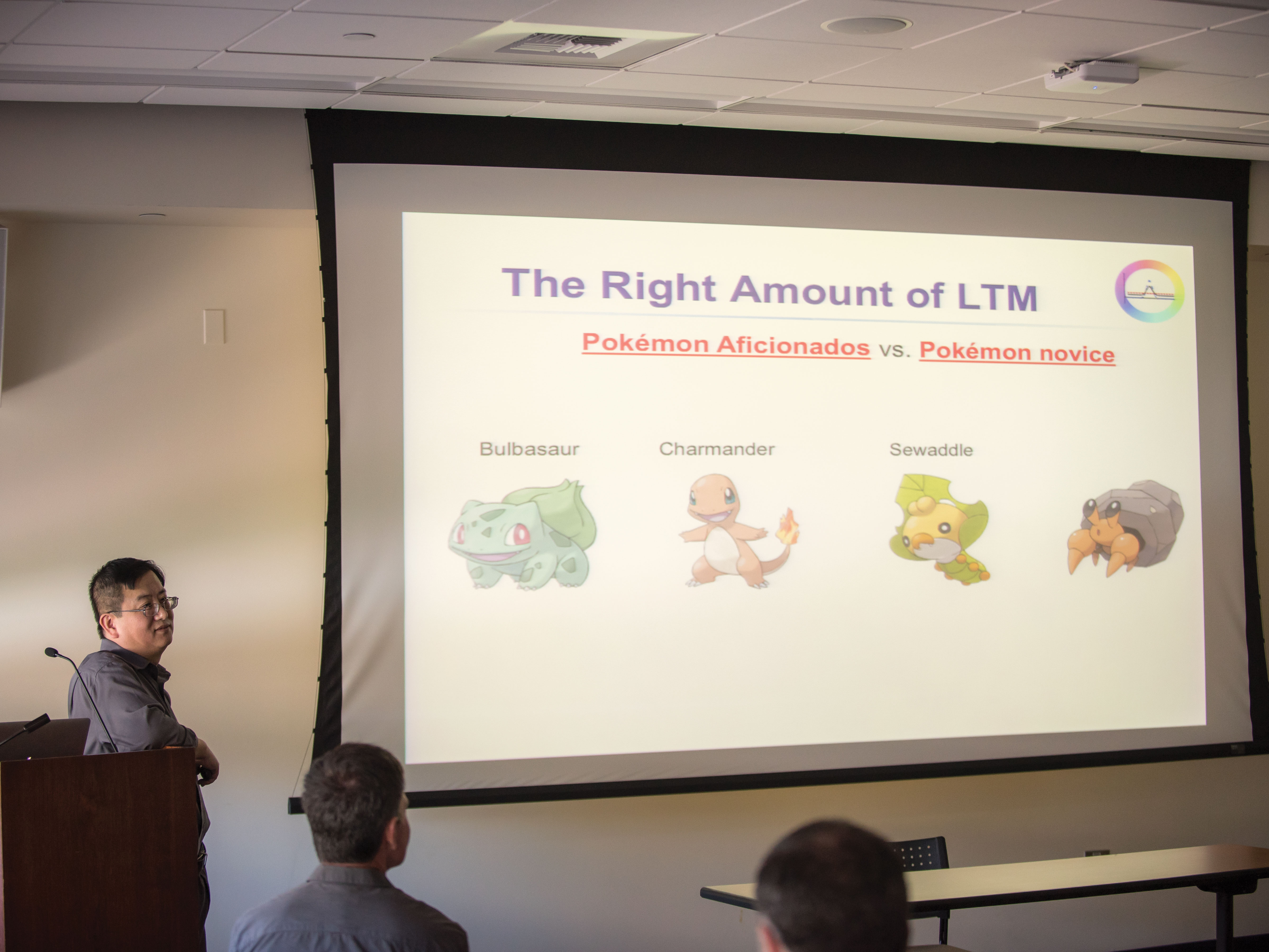 The seminar focused on the main findings from his research: Long-term memory (LTM) has a strong correlation with short-term memory (STM) and LTM increases STM processing speed and efficiency. STM is the small amount of information held in the conscious present and lasts for only a few seconds, however LTM includes a vast amount of information stored over a lifetime that has been absent from consciousness altogether and now revives anew.

Zhang’s research utilized Pokemon characters as stimuli to study whether LTM can boost STM capacity because previous research provides only mixed findings. The study involves hundreds of trials with 30 subjects, 19-20 years old, separated into two groups, one with high familiarity with first generation Pokemon stimuli and one with low familiarity. Each trial was conducted by displaying various numbers of characters for a certain amount of time and asking them to memorize the display. They were then presented with a new display containing a different set of characters and tested to see if they were able to identity the differences. Zhang concluded that the results indicated a “performance difference between the two groups. The high familiarity group subjects were able to remember significantly more stimuli in STM than low familiarity group subjects.”

The second part of the study tested the familiarity of subjects on first generation versus fifth generation pokemon. Results concluded as Zhang predicted, “the first generation of pokemon had a higher rating of familiarity with the majority of students rather than the newer generation.” Zhang mentioned that the higher familiarity with the first generation was indicated “in a survey that recorded most participants either played Pokemon, watched Pokemon on TV or read books about Pokemon from the ages of six to seven years old. But the first generation was released in 2011 when these students were in high school and preparing for college, which caused the lack of interest and knowledge in the newer generation.” Using the fifth generation as a baseline for short-term capacity, Zhang found that pre-existing LTM boosts STM when rapid response is necessary. “As participants grew more familiar with and spent more time with the stimuli, there was a larger increase in short-term memory capacity and the number of retained stimuli,” Zhang stated.

Zhang’s evidence, as mentioned above, provides a “positive correlation between LTM or crystallized intelligence, problem solving using previously acquired knowledge and skill, with STM or fluid intelligence. Book smart LTM can improve street smart STM.”  STM, or working memory, is the core of recognition. This temporary storage buffer is utilized in the service of a variety of cognitive tasks and also correlated with higher cognitive abilities. The capacity, or amount of STM, is an indicator of the IQ level of an individual, so there is a strong correlation between large capacity and higher IQ test scores as well as predictive of fluid intelligence, which is the ability to reason and solve new problems independently.

The study also conducted an electroencephalogram (EEG), which tracks and records brain wave patterns by placing small metal discs with thin wires on the scalp, on subjects while they were conducting the memory trials. They tested the idea that “despite the fact that it takes time for participants to encode information into STM, they are still able to encode familiar LTM information faster into STM than unfamiliar or new information,” said Zhang. With the help of the EEG, they found precise neural evidence of familiar LTM stimuli producing a faster encoding rate into the STM with the given amount of time. Encoding pre-existing LTM memory rather than unfamiliar increases STM processing and efficiency.

Zhang also emphasized the importance of research issues and ethics in psychological and neuroscience studies because previous research studies on the same type of LTM and STM provided only mixed findings and no consensus. These mixed findings were caused by studies conducted without a common focus because the approach on memory research either utilized simple stimuli in laboratory settings or complex stimuli in everyday life. He addressed this concern by stating, “If research is done poorly and has little scientific value, researchers cannot justify participants’ time spent in the study, money spent on the research and the use of other valuable resources required for the study.”

This seminar is one of the Office of Research Integrity’s open monthly seminar series, which aims to highlight ethical issues and contemporary topics involving research with human participants. The next seminar will feature Dr. Gerald Maguire, UCR’s associate dean and designated officer for the Graduate Medical Education (GME) program, health sciences clinical professor and chair of psychiatry. The seminar, entitled “Stuttering: Neuropsychology and Medical Treatment,” will focus on Maguire’s research on brain stimulation and stuttering treatment and will be held on Tuesday, March 14 at 2 p.m. in HUB 355.