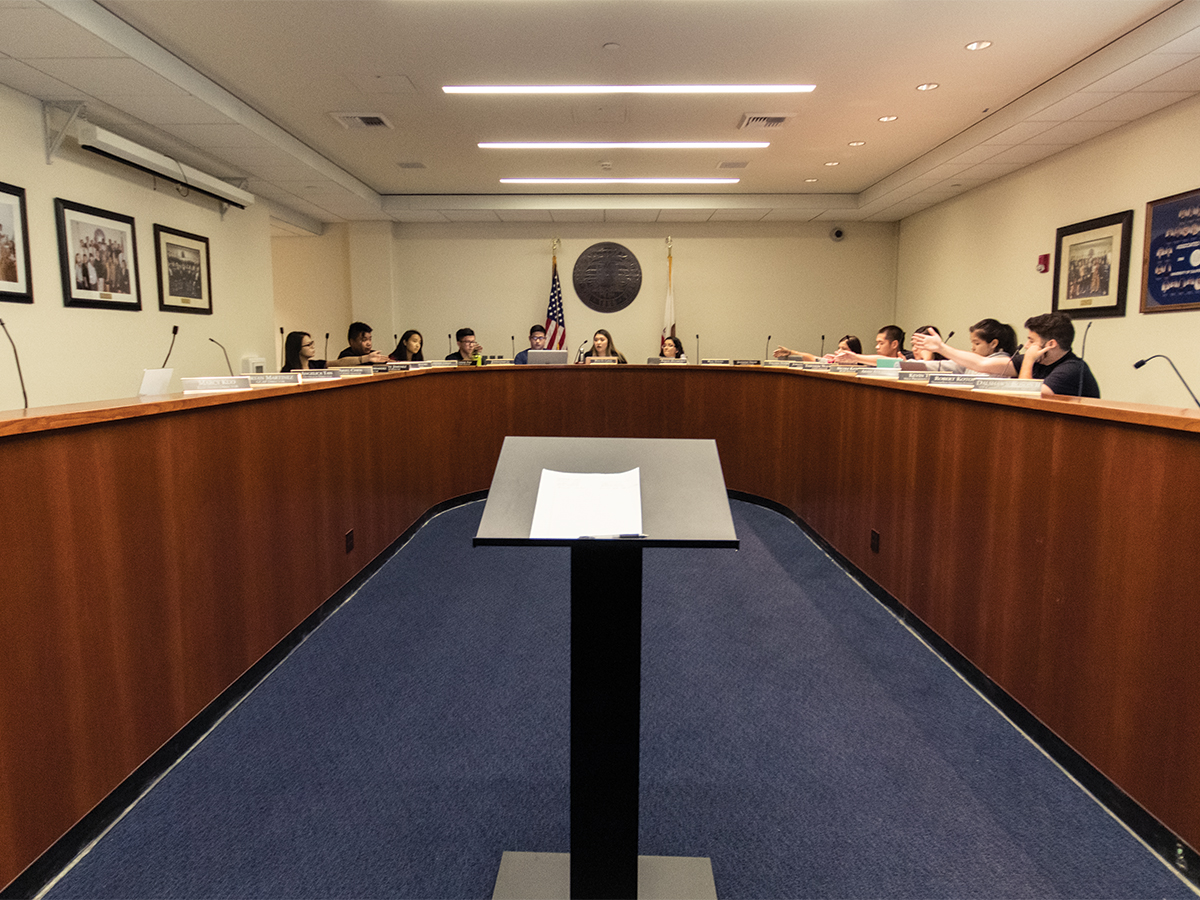 1,546
This past week, varying contingents within ASUCR executed a series of actions that could hold a significant impact on April’s upcoming 2017-18 elections.

As we reported two weeks ago, during the quarter’s second state of association meeting held Wednesday, Feb. 15, the senate unanimously approved amendments to the elections timeline which included moving the deadline for prospective candidates to submit their candidacy from Friday, March 10 to Monday, March 6.

Once the March 6 deadline came around, nearly 30 candidates filed for candidacy, a large majority of which, according to sources, are representatives of the [YOUR]side party — the party which currently holds an overwhelming majority in the ASUCR senate and executive cabinet. The few others are running as independents.

However, at around 5 p.m. on Wednesday, March 8, the ASUCR judicial council issued a ruling to not only immediately extend the filing deadline to Friday, March 17 at 5 p.m., but to disband the party which “participated in … unfair political practices” leading up to the deadline.

Furthermore, the council disallowed the running of any parties in April’s upcoming 2017-18 elections, enforcing that all candidates run as independents.

The decision comes after an investigation into the party’s practices which was initiated once, “soon after the deadline for filing candidacy in the 2017 ASUCR Elections,” a prospective candidate filed a case with judicial council citing “unfair political practices by one of the political parties, causing this petitioner and several others to feasibly meet the deadline,” according to the document.

The investigation, which occurred within the 48 hours following the filing deadline and Wednesday’s judicial council meeting, revealed that party leadership promised executive cabinet positions to this prospective candidate and several other members of the party and that leadership also forced said members to sign “noncompete/nondisclosure” agreements to retain these positions.

However, citing time-stamped communications, the council reports that at 1:33 p.m. on March 6 — less than 4 hours before the filing deadline — the petitioner was informed he no longer held a position in the party, leaving him with little time to file for candidacy either as an independent or under another party.

While no party was explicitly named in the ruling, at around 11:30 p.m. on Saturday, March 11, the Highlander received an email from 2014-15 Vice President of Campus Internal Affairs and [YOUR]side co-founder Fernando Echeverria which included a noncompete agreement form sent to him from the [YOUR]side party, whose stipulations coincide with those of the agreement forms named in the ruling.

The documents were attached to a Jan. 2015 email sent from [YOUR]side co-founder and ASUCR Executive Vice President, at the time, Michael Ervin who introduced and clarified the purpose of the contracts for Echeverria.

These documents emerge days after a discussion with a former executive cabinet member who denied the contracts’ existence. “The only thing people signed was a confidentiality agreement,” stated the former ECAB member, who requested anonymity.

In a phone interview held Saturday evening, Echeverria asserted that, from his knowledge, “that contract is still being disseminated to the rest of the party and it has been used for the past two years.”

While decisions to extend the elections deadline traditionally do not fall under the responsibility of the judicial council, as the ruling acknowledges, the council “felt the need to involve ourselves because a member of the ASUCR community brought a petition to hear a case to us, and we felt it had merit,” stated Vice Chief Justice and lead author of the ruling Hayden Jackson over the phone Thursday evening.

“When we heard it, there were unfair practices which we had to correct,” Jackson furthered.

Yet, opponents of the ruling within ASUCR have expressed displeasure with what they see as the council’s unilateral handling of the case and maintain that elections matters should, at the least, be handled in accordance with the elections director.

“The Judicial Council did not even summon or notify any respondents nor the election director as required,” provided Vice President of Finance Kevin Tseng in an email statement Saturday afternoon (March 11).

It is these concerns which perhaps prompted the ASUCR Finance Committee (for which Tseng is the chair) to vote 5-0-2 to approve an allocation of $2,000 — sourced from student fees — toward the hiring of an external legal counsel to review the judicial ruling during the finance budget hearing held Friday morning (March 10). The finance report and according request for allocation, which was brought forth by CHASS Senator Semi Cole, is pending senate approval in regards to limit during Wednesday’s upcoming senate meeting.

The limit for such allocations, per Chapter 5, Section 6 of the bylaws is $600, but Tseng asserts in that same email that the independent arbitrator they intend to hire, Kyle Levy, is willing to review the ruling free of charge. Levy, a former ASUCR parliamentarian, priorly served as a third-party reviewer of the senate’s practices in a 2015 case where he ultimately deemed the senate’s attempt to remove justices Melina Reyes and Daniel Ojo as unconstitutional.

No less than an hour after receiving Tseng’s statement Saturday, Cole sent a 10-page statement on behalf of the senate directed “To the Campus Community, Chancellor (Kim) Wilcox and Vice Chancellor (James) Sandoval,” which rejects the judicial ruling.

“The judicial council’s recent (ruling) will not be accepted nor acknowledged to by the executive nor legislative branches of ASUCR due to its encroachment of the powers of another branch,” opens the summary of the letter’s argument.

In acknowledging what they deem as the council’s breach of legislative powers, the senate cites Article 5, Section I(g) in the Powers of the Legislative Branch which, “establish(es) rules governing nominations, campaigns and elections for the elected offices of the ASUCR.”

“The Elections Director shall prepare and present a timetable for a general election to the Senate by the end of the first academic quarter of each year, for approval. Any revisions of the timetable shall be made by Senate vote only.”

The letter goes on to levy a number of claims of wrongdoing against the council, including a breach of executive powers and a violation of the judicial rules of procedure.

The statement, which can be read in full online, received signatures of approval from the following 12 legislators:

In response to these and other efforts made to oppose the ruling, Interim Acting President Arturo Gomez, who supports the council’s decision, filed a total of four cases between Saturday evening and early Sunday afternoon.

One, against the 12 aforementioned senators primarily for their co-signing of a letter which, according to the case reading, “lacks a vote from the Senate (which already makes its assertion of speaking for the legislative branch as a whole illegal.”

A second, against the finance committee’s approval to recommend the senate allocate $2,000 toward an external review of the judicial ruling, which, according to the reading, violates four separate bylaws.

A third, against Cole for filing the request for this recommendation which, according to the reading, specifically violates the aforementioned Chapter 5 bylaw which limits funding from allocated funds to $600 per academic year.

Each of these cases are currently pending approval of hearing from the judicial council at time of writing.

The fourth calls for the removal of currently on-leave President Shafi Karim, Vice President of External Affairs Oscar Loera and Personnel Director Alan Alcantara due to their alleged roles in the distribution of the non-compete agreements and particularly the agreements’ stipulate that threatens “to extort $2,000 from any individual who would break it,” per the case reading.

At 12:05 p.m. Monday, March 13, the council processed and approved Gomez’s request for impeachment of these three officials for charges of malfeasance. The senate will be holding an open hearing to determine whether these charges warrant removal at 7:15 p.m. on Wednesday, March 15 in the senate chambers. Chief Justice Jo Gbujama will be presiding.

In a phone conversation Thursday evening, Gomez affirmed his support of the council’s ruling.

“I stand by their (the judicial council’s) decision,” stated Gomez. “Although I personally feel that it may have thrown the election into slight disarray I do believe the judicial council made the call that they believe was best.”

Though Gomez acknowledges that he did not want to involve himself in the elections processes, he notes that, “If the [YOUR]side party was indeed … hinting at someone’s candidacy and then pulled the rug from under their feet at the very last minute, that is definitely a breach in ethical protocol.”

How this affects upcoming elections

Based on the ASUCR elections timeline, debates are set to begin on Wednesday, April 5 — week one of spring quarter — and voting will take place from April 17-21.

According to Elections Director Marcy Kuo, who has already held two of her mandatory workshops for candidates, that timeline will not change despite the ruling, which she cites as a “deterrent” to the elections timeline she established and got unanimous senate approval on nearly six months ago.

Kuo believes this week’s March 17 deadline is “cutting way too close to finals week and also spring break. There’s just no time for me to compile the forms, to send out mass emails for individual platform requests, individual bios, pictures, etc.”

Not only is Kuo frustrated by the apparent difficulties that the ruling creates for her but she finds it “unfair” for those who did file their candidacy by the March 6 deadline.

Kuo further expressed displeasure with the council’s decision to only notify her of their decision to extend the filing deadline after it was final, something Jackson admitted to in our discussion Thursday.

Though, Jackson maintains that, “Because of the nature of this case,” the council had to act “very quickly.”

“That was honestly in big portion to make sure there was as little damage to anybody’s schedules as much as possible,” stated Jackson.

Despite her frustration, Kuo recognizes that the decision could be positive for the upcoming elections.

“If this violation did happen, I think the way they (judicial) ruled it is just,” stated Kuo. “As it stands right now, with the evidence in place … it would be beneficial for the long run to have all independents run as independents or to have no parties at all.”

Citing the 2015-16 elections’ illegal laptopping controversy and last year’s re-voting dilemma, Gomez finds this year’s developments to be “consistent with past elections practices.” Still, the president hopes the judicial ruling is a step toward ensuring “that this election is run as ethically and as fairly as possible.”

Elections week for the 2017-18 elections begins the week of Monday, April 17 and comes to a close on Friday, April 21. If interested in filing an independent candidacy before the Friday, March 17 5 p.m. deadline you can do so here.

This article has been updated from the print version to reflect recent developments. Contact the writer via email at editorinchief@highlandernews.org.