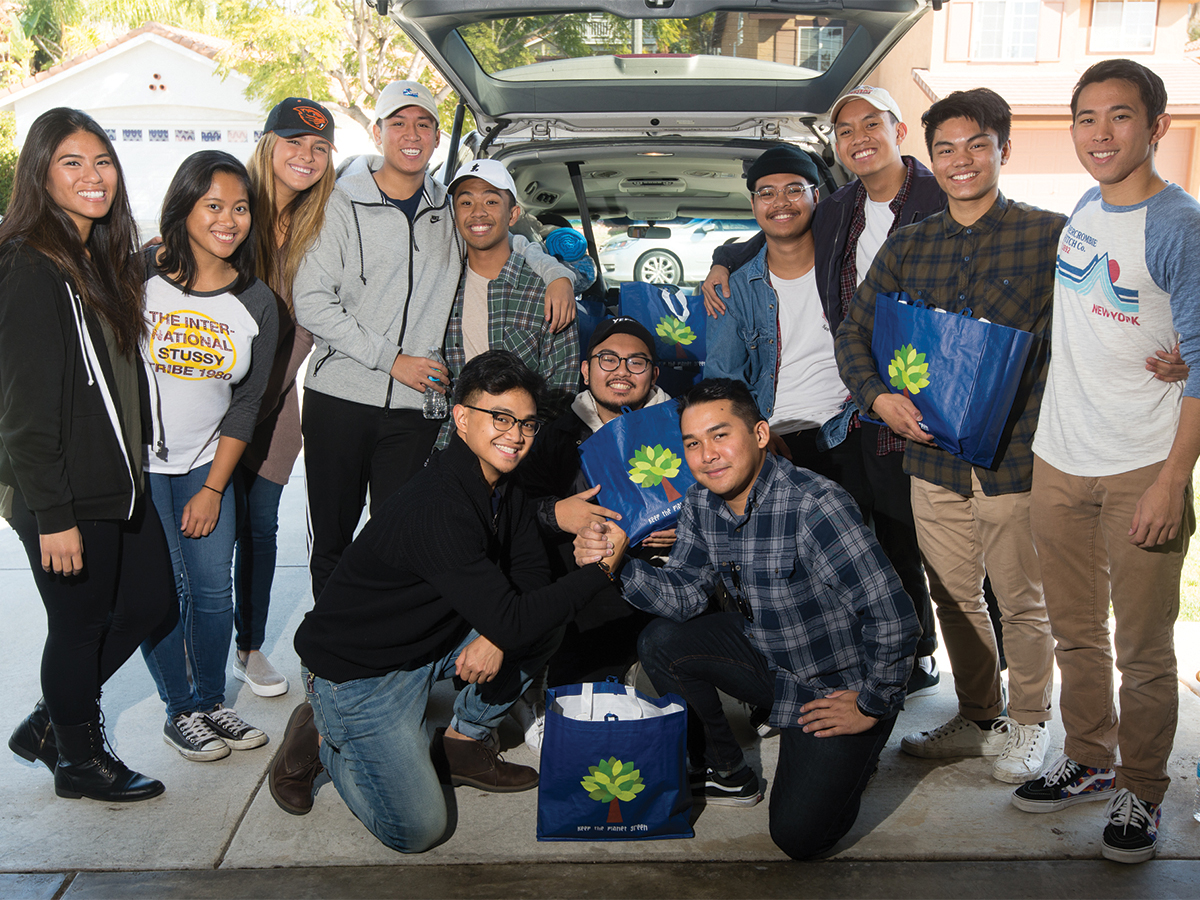 Based on the parable of the mustard seed found in the Bible, a mustard seed is smaller than a fingertip but with faith it can grow into a plant up to 2,000 times larger than its original size. This is the meaning behind The Mustard Seed Project’s name: That something small, like care packages, can make a large impact within the homeless community.

The Mustard Seed Project began as a local project by Martin Arceo, a second-year biology major and president of The Mustard Seed Project. “Initially, I started this with my family. We made care packages and handed them out throughout San Diego. We got a lot of support from the community. Some of our supporters are Riverside Kiwanis Club, who in the past donated $500 to our cause and Path of Life ministries,” shared Arceo.

“These bags aren’t handouts, but we want them to be hand-ups,” he explained. The care packages contain a water container, facial wipes, socks, a large blanket, a personal letter written by community members ranging from advice to personal stories, a Bible and a pamphlet with information on where they can find nonprofits to get access to education, free meals, showers, computers or even a phone. Arceo explained that the main reason why people stay on the streets is because they are unaware of the resources and benefits available to them. Thus, the pamphlet teaches them about resources available to them in a convenient manner.

Aaron Hipolito, a second-year English major, is the political strategist of the club. Hipolito joined because of the impact of the care packages. The idea of the packages being “hand-ups” instead of “hand-outs” made him aware of the impact the packages are making. In terms of “hand-ups,” the care packages are not just gifts nor hand-outs but rather tools to help them get off the streets. Thus, the packages are hand-ups in the sense that the pamphlet contained provides resources to aid in social mobility, which is something that Arceo believes makes the organization different from others that also seek to aid people experiencing homelessness.

Funds for the club come from donations by local nonprofits. When Arceo first began the project, it was mostly funded by what he earned through teaching Taekwondo classes. “I wanted to make Taekwondo matter. So the best way to do it was to raise money to fund some other cause,” reasoned Arceo.

A lot of people experiencing homelessness tell us, ‘I don’t just feel homeless physically but feel it emotionally, mentally and spiritually.

Requejo then went on her first trip with the club on Saturday, Feb. 25. to deliver sandwiches in downtown Riverside. “At first it’s kind of scary. You’re going up to a stranger. You don’t know them, so it’s intimidating,” she remarked. However, interacting with those who are homeless turned out to be an eye-opening experience for Requejo because it made her realize a lot of the things she took for granted and  also imparted upon her precious life advice. “A lot of them were talking about ‘Don’t think about materialistic things, be fair, be kind,’” she revealed.

Apart from receiving life advice, they were also informed about their stories and backgrounds. “We interacted with these three musicians who didn’t see themselves as homeless,” shared Hipolito. “Martin asked one of the guys where he was from and he said, ‘Planet Earth.’ We also ran into a woman who stated that she had a mental illness and lost her child to Child Protective Services. It really puts things into perspective and motivates me to do the best I can.”

It was only recently that Arceo brought the club into motion at UCR, so packages have yet to be delivered around Riverside. In the meantime, apart from helping the homeless, the organization also aims to help students reach out to nonprofit organizations. “The reason why we are targeting UCR is to get students involved and have students connect with nonprofit organizations outside of UCR. They can find volunteer opportunities, internships, jobs and help the community in general,” explained Requejo.

Arceo sees the objective of The Mustard Seed Project as both assisting and accompanying people on the streets, a service that Requejo believes makes them a more raw and intimate club than others. “Not everybody personally goes down to the streets and speaks with someone who is experiencing homelessness. We go to them and try to talk to them,” she vocalized.

Arceo and Requejo encourage students to check out their organization. “The kind of person in The Mustard Seed Project is someone that is trying to make an impact in their community. You can go on HighlanderLink or contact one of our members. Just tell us you want to join. There is a place for you,” addressed Arceo.
The group’s first delivery in Riverside and first meeting is planned for spring quarter. Even though the meeting place and time has yet to be decided, people can still contact The Mustard Seed Project through their Facebook page (@MustardProject) and Instagram (@mustardproject) as well as be provided with all of the details on their HighlanderLink (The Mustard Seed Project).