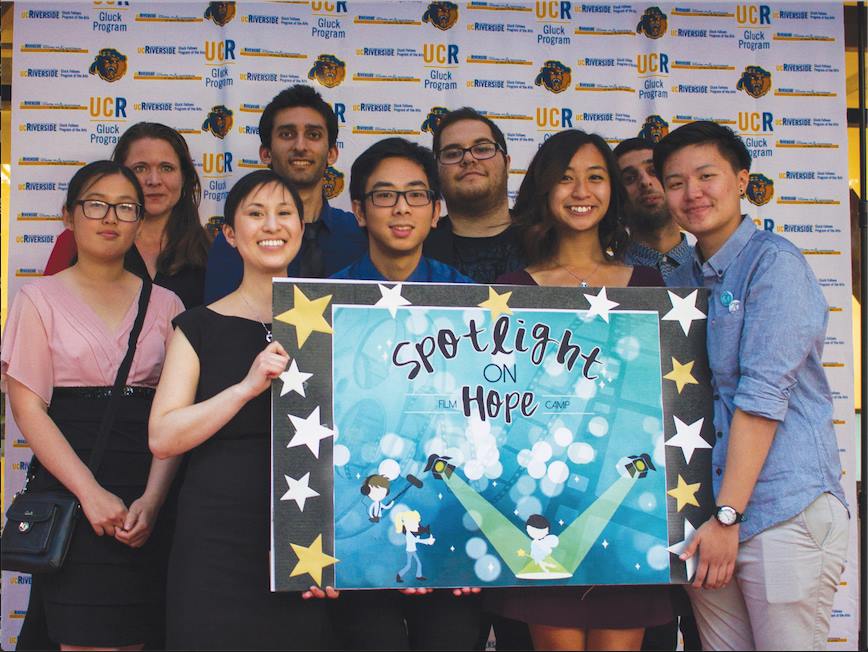 Move over Spielberg, Cameron and Tarantino: The next generation of great directors is here. On Thursday, April 6, at the Barbara and Art Culver Center of the Arts located in downtown Riverside, the Spotlight on Hope Film Camp hosted their second annual film screening of the short stop-motion films that were produced by the participating kids who are fighting cancer. The Gluck Fellows Program of the Arts at UCR generously invited the organization to host their event at the center of the arts.

Over the past couple of months, Spotlight on Hope hosted five, two-day film workshops, where kids diagnosed with cancer and their families could escape their tough realities and create art through their very own stop-motion films. Thursday night was a celebratory event in which they were able to see their creations on the big screen.

The evening was treated like a real, red carpet event. Families entered with their children “dressed to the nines.” Young girls twirled around in their puffy and sparkly dresses while the boys looked dapper in their buttondown shirts and ties. Their very own red carpet and photo backdrop served as an activity to pass the time, but it was also a way for the kids to truly feel like they were attending an extravagant Hollywood film premiere of their own.
Once everyone was seated in the small yet comfortable theater, Nguyen took the stage for a short introduction. “I had the opportunity to intern at Think Ten Media Group, a production company that makes indie films,” Nguyen explained. “From there, I got the idea of creating film workshops for pediatric patients as a therapeutic outlet.”Cassie Nguyen, president and founder of the Spotlight on Hope organization, remained busy running back and forth making sure everything was set up perfectly while finding time to greet each family. The gratitude in parents’ eyes when they greeted Cassie was profound and heartwarming, like they were saying, “Thank you for all you’ve done for our kids” without having to say a word.

The evening was truly a night of escape, for there was rarely any talk of cancer. It was all about giving the kids and their families the real, red carpet treatment.

Following Nguyen, a short video of the film workshops played. It showed kids making storyboards and filming their stop-motion picture, gleefully immersing themselves in the creative process. Then it was time for the main event. Fifteen short films were played and they consisted of many different genres and themes. One was titled “Snow Day,” which starred a snowman giving his friend a scarf so they could keep warm and enjoy their day in the snow. Another was titled “G Force Saves Coachella,” where a group of heroes save the music festival by defeating an evil monster.

Even the genre of horror made it’s appearance. Eleven-year-old Juliet Martinez’s short film was titled, “Dolls” which featured Barbie and Ken. It wasn’t a “pretty in pink” storyline, but a plot full of suspense, gore and murder. “My inspiration for this film was Chucky,” Martinez explained, evoking a few chuckles from the audience when asked what prompted her to make such a film during the Q-and-A portion of the evening. Her family has bestowed her with the title of, “The Next Tarantino,” as she hopes to be a director of thriller films in the future.

Once the films wrapped up, Nguyen invited all 15 participants to the front of the theater where they were recognized for their work and given a certificate. Flashes of light were sprawled all over the theater as family members were eager to capture the wide smile on the children’s faces.

Alongside Nguyen, Sara Leung, a third-year neuroscience major and next year’s Spotlight on Hope president, took the stage to close out the evening. “I just loved seeing the kids happy when they were watching their own movies,” Nguyen remarked when asked about her favorite part of the evening. Leung felt the same way and expressed her goals as president for the next year. “We want to get this workshop across all the UC’s and we hope to have more members, participants and even volunteers.”

The evening was truly a night of escape, for there was rarely any talk of cancer. It was all about giving the kids and their families the real, red carpet treatment. We never know — we might be seeing these kids walk the red carpet at the Oscars in just a few years.