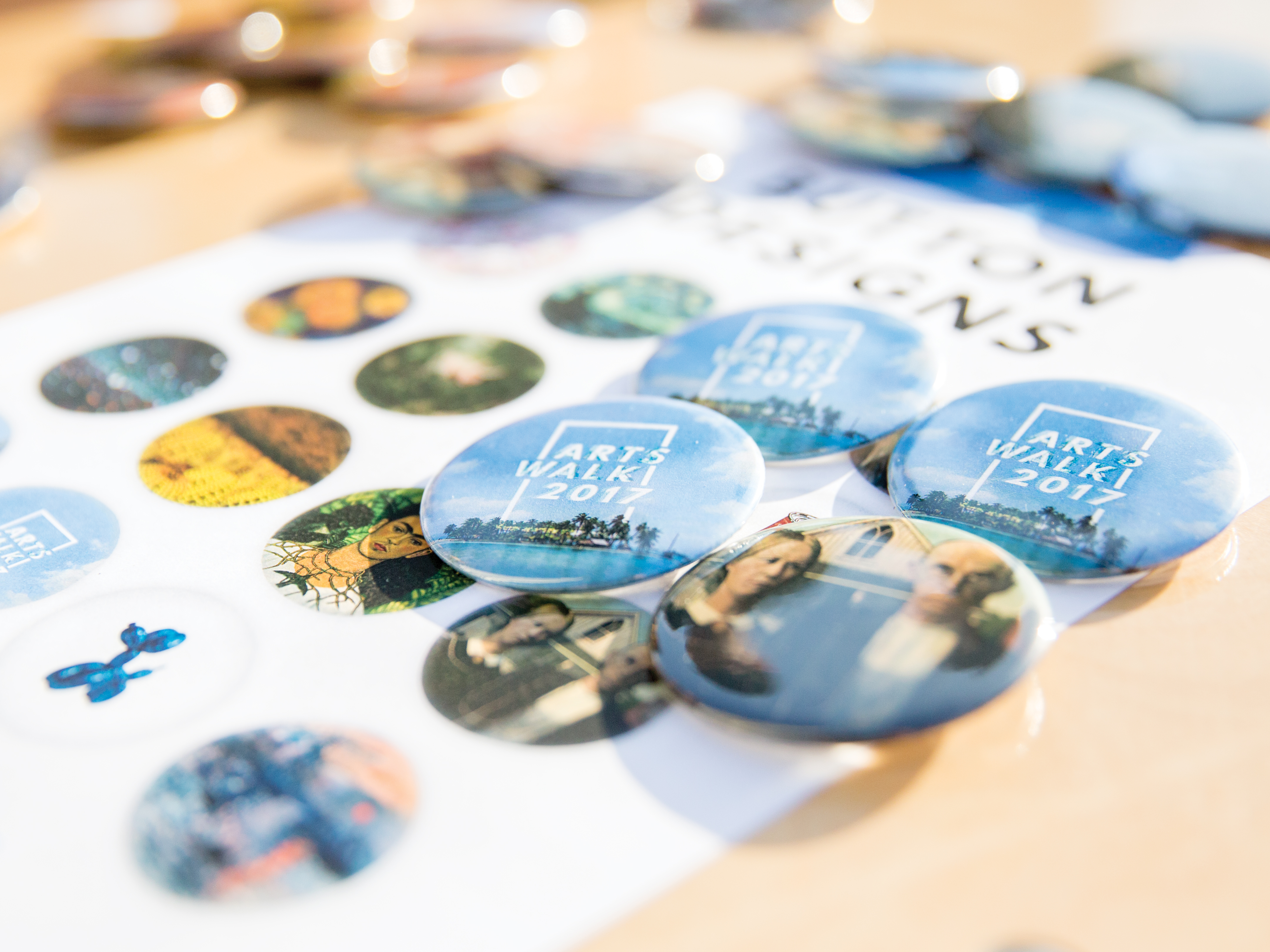 On the evening of Wednesday, April 19, the Bell Tower was surrounded by an array of art showcases ranging from canvas paintings to photography and even graffiti art in ASPB’s Arts Walk 2017 event. When I arrived to the event around 5:30 p.m., I was surprised to see only a handful of students at the art showcase. In my mind, I thought the event would be much bigger, showcasing more works of art than the amount that was already there. But as I spent a good two hours there, I realized it was a much more intimate event, which made the whole experience pleasant due to the relaxed atmosphere (who could go wrong with checking out students’ artwork to the tune of Childish Gambino’s “Redbone” blasting through the speakers?).

I decided to check out the artwork in a counterclockwise fashion starting from the north side of the tower, facing the HUB. This area was home to an oil painting and photography showcase. My eyes immediately met the ferocious colors of a couple of oil paintings — one featuring Mia Wallace of “Pulp Fiction” fame during her infamous coke-snorting scene with the caption, “I said Goddamn!” — and a beautiful depiction of Tex-Mex music icon, Selena. I caught up with the artist behind the paintings, third-year studio art major Catherine Atilano, on her thoughts of the works she produced and how it felt to show them off at the event. Atilano stated that both works took varying degrees of time to complete. For example, the “Mia Wallace” piece, painted on a 20×20 canvas took about two days complete, while the “Selena” piece, a more comprehensive and colorful piece, took around five days to complete on a 22×28 canvas.

On finally showing off her hard work to the body of students that came out in support of the event, she said, “I feel very accomplished and happy with myself to be able to show my progress throughout my years of painting and I really enjoy the reactions that people give.” She continued, “I always try to make paintings that will ‘wow’ and make (them) happy or bring out a very specific emotion. But yeah it’s most definitely very rewarding to know that I have come this far (and) that I can show people my art and have it appreciated.”

The north side was also inhabited by a unique graffiti art showcase. The artist behind it, going by the name of Septerhed, painted what seemed to be an off-the-wall interpretation of UCR mascot Scotty wearing a UCR baseball cap. When I checked on it around 6 p.m., the overall layout, dripping with oozes of green, yellow and pink, was done. At around 7:30 p.m., the overall piece was finished, and the bright colors helped bring the psychedelic version of Scotty alive.

On the west side, there was a pin station where students could take up to three, readily made pins all depicting renowned artworks. For example, one pin that I got portrayed the classic artwork “The Great Wave off Kanagawa” by legendary Japanese artist Hokusai. I decided to get two more pins — one portraying the iconic “The Scream” painting by Edvard Munch and another depicting two farmers in the similarly iconic “American Gothic” painting. I figured they could make for great decorations on my backpack somewhere, hopefully without being too pretentious.

This side of the tower also had the most unique station which involved students lining up for a chance to take a free plant of their choosing. Unfortunately, by the time I got there there weren’t any normal-sized jars anymore and had to take a plant in a tiny, plastic black container — much to my frustration since the soil kept falling off from the bottom. It’s all good though; I’m planning to really take care of the little guy (hopefully not withered by the time you read this).

The south side of the tower, much like the north side, saw even more paintings and photography showcases. A great deal of the art on this side was hung up on a wide display that spanned most of the south side of the Bell Tower. As I saw the artwork on this side of the tower, I noticed a good number of them didn’t have names attached to them and were anonymous. But I also noticed many were from artist Anoop Nijar. One of his pieces that stood out to me was titled, “Sewer People,” which depicted octopus tentacles that were beautifully drawn and detailed with ink.

Next up were some photographs from fourth-year business major Samantha Hamman, whose photo series titled, “Through a Lens” featured gorgeous shots of nature. The vivid colors Hamman chose really brought out the radiant landscape vistas she acquired with her camera. I also could have sworn a couple of the photos chosen for this art piece were shots taken from Mt. Rubidoux, a popular hiker-friendly park a couple miles away from UCR.

On the east, two booth stations dedicated to crafting caricatures and silhouette portraits were where the majority of students flocked to. The caricature booth seemed to be the more popular of the two, having a line that extended well outside the immediate area of the Bell Tower. I decided to take my time with the shorter line of the silhouette portrait booth. Unlike the caricature booth, the silhouettes were done pretty quickly, ranging from three to five minutes. The artist behind the silhouette portraits, Michael Garrison, told me a very brief story about how he started doing this type of artwork. Garrison stated that he had been doing them since 1976, at first as a nice gesture for a girl. He then took his talents to Disneyland, where he started working as a silhouette artist, doing dozens of them per day. But ever since then, he said he has moved on, but still continues to work on the art due to his passion.

In a world where the internet is replacing physical versions of artworks with digital ones, it’s nice to know that physical showcases like ASPB’s Arts Walk still thrive, because quite simply, it’s not the same looking at artwork through a screen than it is to see it up close and personal.