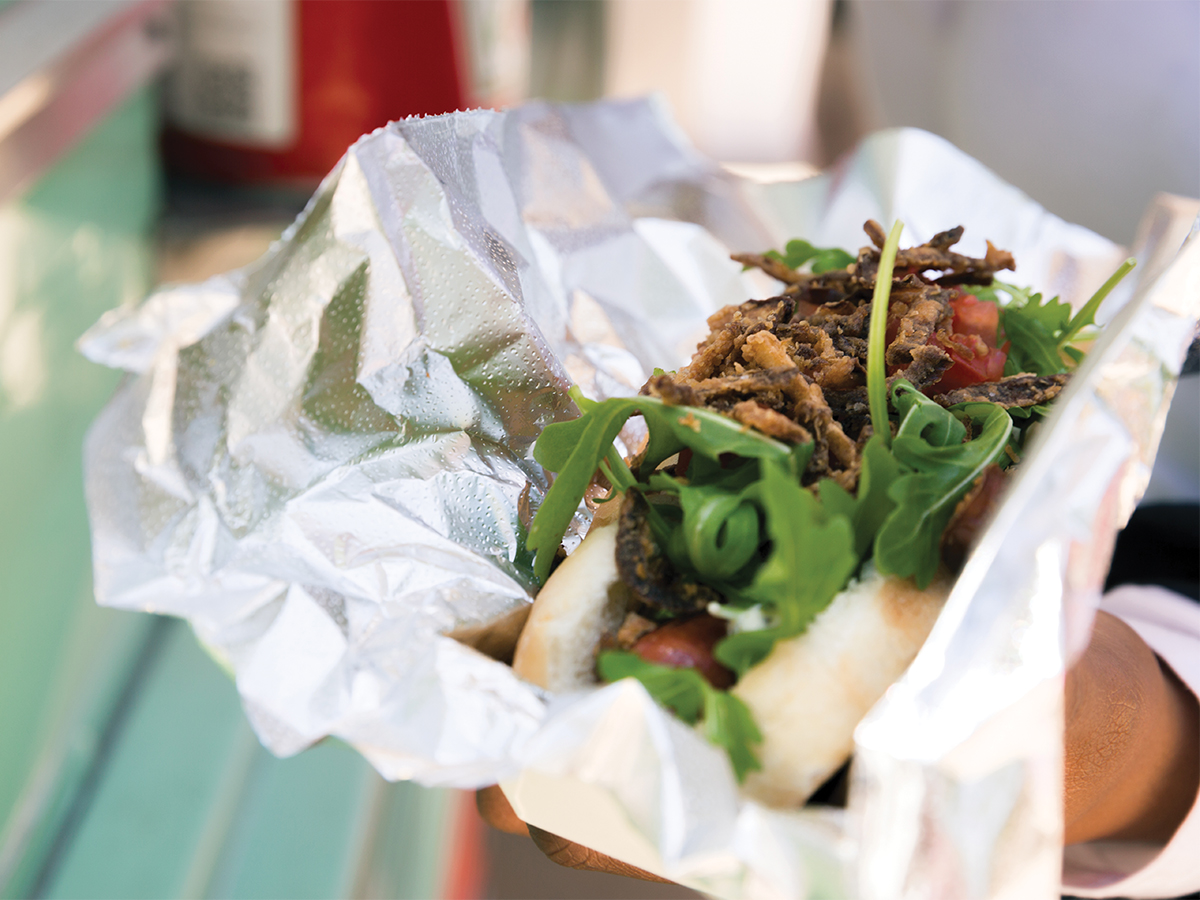 It’s that time of year again — the time to break out your wallets, gather with your friends and head over to the center of campus to eat as much as your stomach can handle. On Thursday, April 20, UCR held it’s bi-annual food truck festival, in which a variety of different food trucks rolled onto campus offering students a mouth-watering variety for their lunchtime meals.

As soon as 11 o’clock struck, hundreds of students rushed to the food trucks gathered along  the Bell Tower lawn area that ranged from Mediterranean to Filipino cuisine.

Popular seafood trucks such as Cousins Maine Lobster, which offered lobster rolls and crab cakes, had a humongous line for the whole duration of the event. Japanese cuisine such as the Ninja Rice Burger truck offered a new twist to what we Americans know as a burger. Rice was cooked and molded into a bun shape and baked until it’s texture turned crispy. Then, students could pick what type of rice burger they wanted. Some of the options included a teriyaki tofu rice burger and chicken cutlet rice burger.

“I love exploring different varieties of food,” Josiah Parks, a third-year English major, expressed when asked what he was most excited about with the food truck festival. “I don’t have to decide between the restaurants in the HUB or University Village. I have more choices.”

Parks opted for a Vietnamese food truck called “Banh Mi in LA” and ordered spring rolls which were filled with shrimp, carrots, cilantro and other greens. Other students such as Audrey Cajucom, a third-year biology major, chose another popular food truck, “Rice Balls on Fire,” a Korean fusion food truck. Cajucom ordered a salmon skin sushi burrito. “It had everything you would have in a sushi roll in burrito form,” Cajucom explained. “There was grilled salmon, lettuce and rice all wrapped up in a seaweed wrap. I definitely feel satisfied.”

Other food trucks such as Dogtown Dogs provided students with a twist on the well-known hot dog with items such as “Trailer Trash.” This hot dog was topped with beef chili, nacho cheese and Frito’s chips.

The Berlin Food Truck had Berlin sausages and gourmet grilled cheeses. The classic “Bratwurst Dog” topped with grilled onion, sauerkraut and mustard exemplified a great way to get a little taste of Germany, all the way out here in Riverside.

Besides food trucks serving main courses, there were a few trucks that served dessert like “Crepes Bonaparte.” The crepe called “HazelBerryAna” was a popular choice, for it had nutella, bananas and strawberries all in one. Another dessert option that was perfect for the hot day was “Kona Ice,” a food truck that served shaved ice and offered over 10 unique flavors as topping options.

Nonetheless, no one regretted enjoying themselves on one of the two days of the year in which endless, interesting and fun food options are offered right on campus.

Trying something new and exciting seemed to be everyone’s approach to the festival. “I look for novelty and uniqueness,” Ethan Chen, a fourth-year business major, explained. “There are options for everybody. It’s a good time to splurge and spend time with your friends. People bond over food.”

As always, the food truck festival did not disappoint. The energy on campus was raised and no matter where you looked, UCR students were simply having some down time between classes, chowing down on their scrumptious grub with smiles on their faces. Overall, the festival’s slogan proved true: “Come hungry, leave happy.” The only problem was falling into a food coma during class, or else you’d feel bad for eating all that food! Nonetheless, no one regretted enjoying themselves on one of the two days of the year in which endless, interesting and fun food options are offered right on campus.