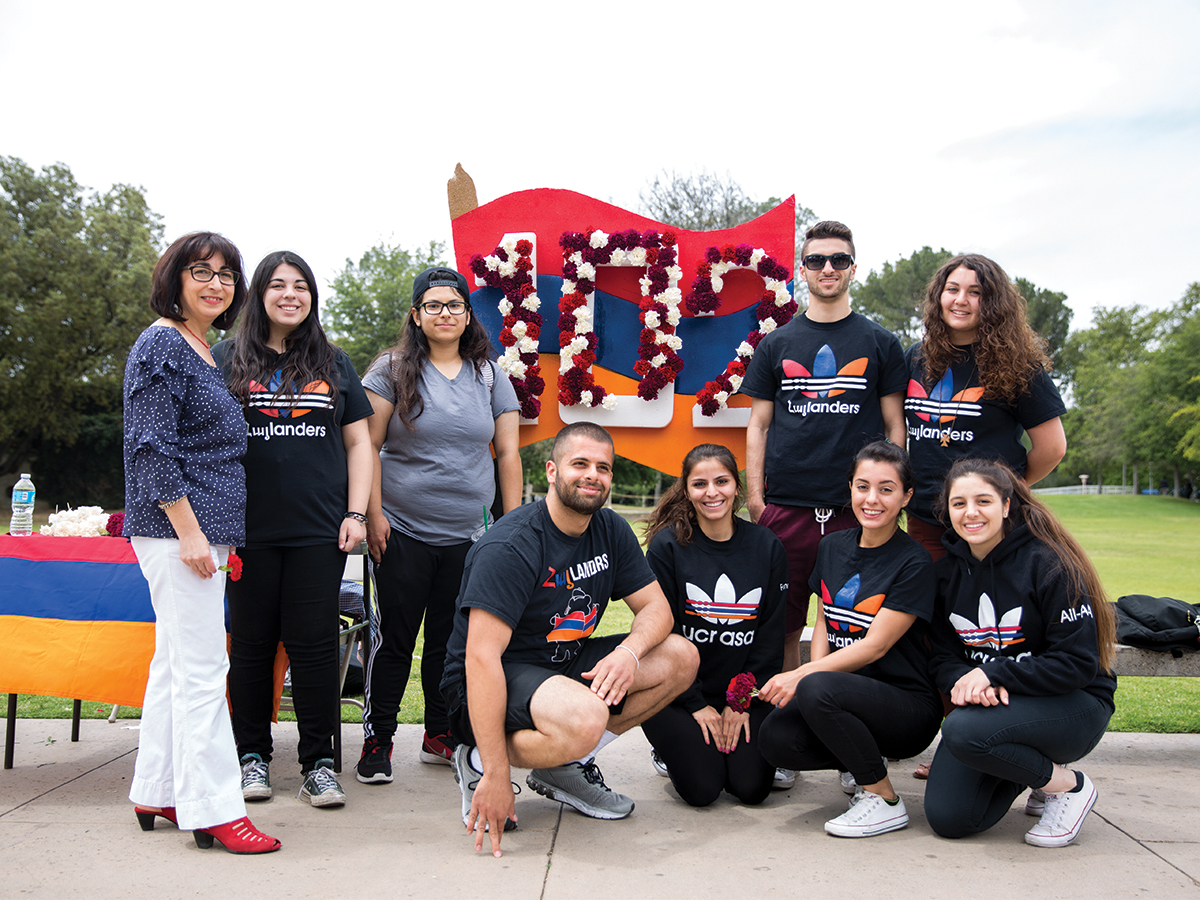 Students led by the UCR Armenian Student Association (ASA) congregated by the Bell Tower early on Tuesday, April 25 to commemorate the 102nd anniversary of the Armenian Genocide. ASA volunteers assembled a display of the Armenian flag, on which passersby could pin a flower in order to remember the victims of the 1915 mass killings. The display’s assorted pink, purple and white flowers served as a symbol of the lives lost a century ago.

ASA member Angela Burmayan, a third-year biology major, helped passing students place a commemorative flower on the display while offering background information on the significance and history behind the event. Many students were not well acquainted with the details surrounding the Armenian Genocide, and a handful were unaware of its existence. Attending ASA members were on hand to speak with students about the genocide, ensuring that all who stopped by left with a new understanding of the significance of this event.

Fourth-year neuroscience major Nihaal Shah was one of those who stopped by to learn about the significance of the display. “I didn’t know about the genocide until I got there, but I thought the setup was beautifully made,” Nihaal said. “I liked the idea of putting up flowers to commemorate the lives lost.”

The Armenian Genocide, which began in the Ottoman Empire in 1915 and claimed the lives of over 1.5 million Armenians, Greeks and Assyrians, was orchestrated by Turkish nationalists who were trying to create a modern Turkish state. In the process, thousands of families were separated as the government deported, shot or forced innocent people to march into the desert where they were executed.

For many Armenians today, the genocide is a deeply personal issue, with many having family members who either endured or lost their lives in this massacre. “I know my great-grandparents have been killed in the genocide,” said ASA president Arman Virabov, “And their parents too.”

To this day, the Turkish government refuses to recognize the 1915 killings of the Ottoman Christian population as genocide. Across the country, any mention of these events is omitted from literature, including textbooks, and acknowledgement of these actions as genocide is a crime punishable by imprisonment.

In the United States, too, recognition of the genocide is a controversial subject. To this date, no U.S. president has ever recognized the events of 1915 as genocide. ASA member Meline Zaghikian told The Highlander that, “Obama, although he said several times that he would recognize the Armenian Genocide, said no such words once he took office.” That word, she explained, “is taboo … no one wants to piss the Turks off by using it.”

This taboo is the direct result of the U.S.’ military relationship with Turkey, an alliance consisting of shared military bases and technology that has only increased in importance in the ongoing campaign against the neighboring Islamic State group in Iraq and Syria. The Turkish government has often warned that the use of the term would jeopardize the friendly relations the two countries enjoy.

President Donald Trump has also refused to call the events a genocide. This has frustrated many Armenian-Americans, like Burmayan, who said, “If you don’t recognize it as a genocide, the genocide continues.”