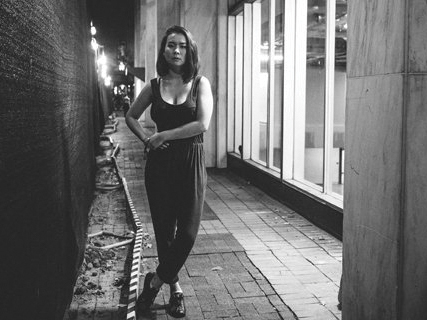 We recently wrote about Mitski for Under the Radar, highlighting her as an incredibly potent songwriter and live performer who is currently seeing an great rise in popularity. On April 20, we had a chance to catch a Mitski show at the Glass House in Pomona.

The opening acts included Steady Holiday and Springtime Carnivore, both of which were female-fronted indie pop bands that shared the same excitement to see Mitski perform that the audience had. Steady Holiday’s psych rock-influenced set was a treat to behold; my first time listening to singer Dre Babinski’s dreamy sounds made the wait for Mitski much more bearable than initially assumed. While I was less interested in Springtime Carnivore’s set, their performance was cheery enough to elevate the energy and put a smile on many a face in the crowd.

Catching Mitski live for the fourth time was nothing short of marvelous. She kicked the set off with “Dan the Dancer” off her latest release, “Puberty 2.” Per usual, she donned a commanding bass which, paired with her alluring vocals, drove home a wealth of emotions served up against sounds equal parts rugged and heavenly. Save from her incredible performance, the highlight of the night came in the form of a failed prom request: “Is there a Parker?” she asked the crowd which responded in muffled laughter, presumably none of who’s was Parker. According to Mitski, the high schooler had emailed her enquiring if she could aid him in asking a girl named Phoebe to prom.

If nothing else, the absenteeism proved a comical memory for those in attendance, a nice touch atop seeing Mitski perform fan favorites such as “Your Best American Girl” and “Francis Forever.” The night ended with an encore solo rendition of “Class of 2013” off her sophomore album “Retired from Sad, New Career in Business,” which saw the singer-songwriter singing into her guitar which served in place of her mother — a tender, powerful track that elegantly punctuated the night.