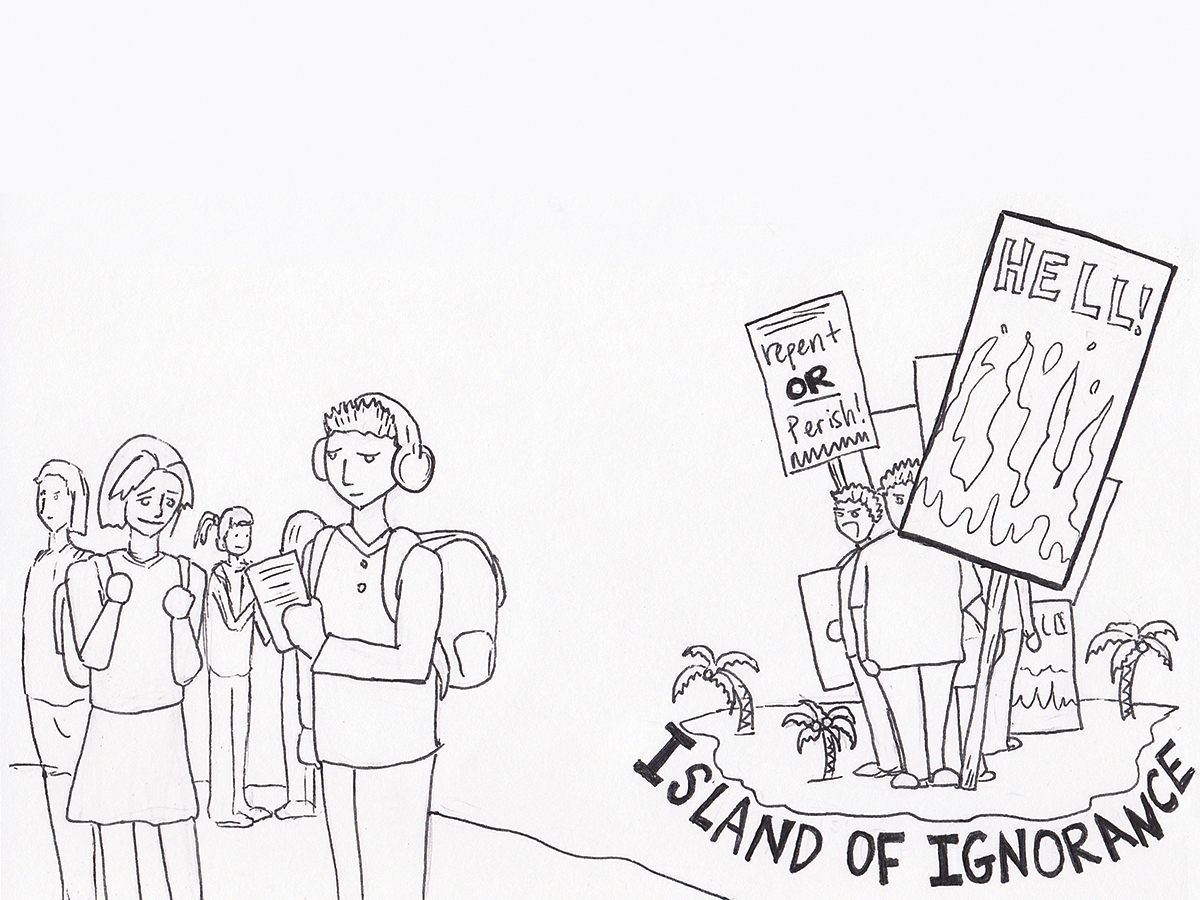 Last week, a noteworthy sight on campus was a group of religious extremists armed with signs at the Bell Tower vehemently condemning homosexuality, abortion and even yoga pants as sins. Most students usually ignored these maniacs but some tried to counter many of their points by debating with them and even mocking them for their erroneous beliefs.

Encountering such hateful and narrow-minded people is definitely disturbing and unsettling, and might cause some people significant discomfort. Unfortunately, beyond spreading antagonistic dialogue, these religious extremists are guilty of little else. Their words carry very little weight for those who are not religious and do not believe in their brand of hell in the first place. However, regardless of the obvious faults in their logic, they still attract an audience.

What these extremists say is provoking and infuriating, so it is understandable that many people want to refute their claims or banish them from campus altogether. Unfortunately, they are still technically organizing peacefully (as in, not causing any physical violence or harm) in a public space, thus protecting themselves under the First Amendment. Therefore, campus administration would be beyond their jurisdiction to remove these individuals or prevent them from returning to our campus.

As a public institution, this school has no place in interfering with these individuals’ constitutional rights. Simply because the rantings of a religious extremist causes students to be distressed and angry does not warrant censorship. Ultimately, the university has a responsibility to uphold the tenets of free speech and assembly. Much like how students and campus workers have the rights to (and have practiced their rights to) organize, so do these extremists.

Furthermore, a university is intended to be a platform for students to challenge established beliefs and exchange ideas. Unfortunately, again, this principle also applies to hateful individuals and erroneous opinions. However, perhaps the presence of these extremists is a good reminder for students that there are, in fact, lunatics out there who have extremely deluded convictions. This could be a good opportunity for many students to be able to think critically and deconstruct fallacious beliefs and arguments.

Evidently, these individuals are exploiting the university’s principles and largely liberal population to agitate an audience and stir controversy. Regardless of whatever perfect counter argument is thrown at them, it is highly unlikely that they will change their beliefs and cease espousing hate, similar to how it is equally improbable that they will actually influence any individual with a conscience and brain on this campus. Anybody that engages with these extremists would only be exhausting themselves.

Although their speech is technically legal, it is still undoubtedly problematic. Ultimately, these religious extremists are misrepresenting an otherwise peaceful and tolerant group of people. They are cherry picking very specific facets of the Bible and vocalizing their very misconstrued interpretations of it as if it is the truth. It is important for students to remain mindful that these extremists are not a reflection of all religious people, and not let these encounters taint their future interactions.

As students of this institution, it is our responsibility to be mature and dignified in the way we handle this situation. Giving these bigots the attention they hungrily seek only feeds their desire to continue proclaiming their message. Congregating around them only provides them with targets for their insults. The best approach would be to starve them out — they will grow tired and wither away eventually.