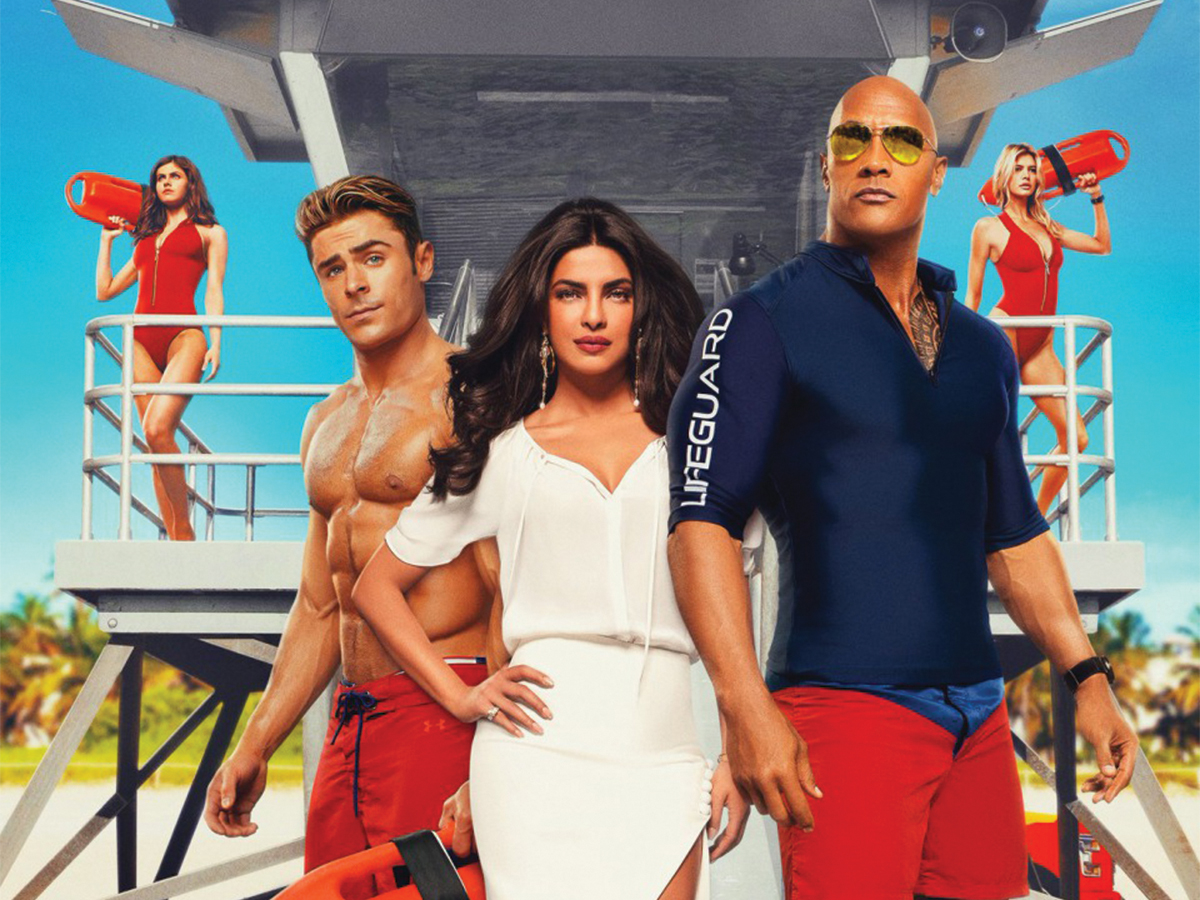 “Baywatch” centers around some meat-headed lifeguards who handle extremely farcical incidents that occur on a hazard-prone beach. With a beach so susceptible to danger, one would think the police would be involved, but no, it’s the unqualified lifeguards. As expected, the movie does try to parody the ‘90s “Baywatch” television series, but its gags quickly desiccate, concluding with no dive into surprise or hilarity.

Main lifeguard and local hero Mitch Buchannon (Dwayne Johnson) is a nosy caregiver who finds pursuing and arresting drug operations more necessary in his job than staying in his tower to serve his lifeguard duties. He recruits other lifeguards to follow his sandy footsteps such as a disgraced Olympian Matt Brody (Zac Efron), who is a self-entitled pretty boy that conspicuously resembles Ryan Lochte. Alongside are three female lifeguards — Summer (Alexandra Daddario), C.J. (Kelly Rohrbach) and Stephanie (Ilfenesh Hadera) — who are not used to their full potential in fight scenes or comedic dialogue, instead serving as featured poster chicks with buxom chests and skin-tight swimsuits. And finally, amongst the scantily clad hotties there’s the outcasted newbie, Ronnie (Jon Bass), who embraces his pudgy body, which sadly becomes a laughing matter through slow-mo running scenes that highlight his rippling flaps. Thus, together, the protectors of the bay are depicted as uncertified show-ponies with mostly high-rated looks but low-rated comedy.

Issue one out of 300 is that there are too many needless subplots, so it becomes a stale, stretched out, two-hour drag. The main storyline is supposed to be for the lifeguards to catch the villain, Victoria Leeds (Priyanka Chopra), but it’s only revealed that she’s doing something evil related to drugs and another vaguely diabolical thing involving real estate. In fact, the film’s screenwriters don’t specify the adversary’s motive, because they were too preoccupied penning and infiltrating weak romantic side plots into the movie — the improbable love affairs between C.J. and Ronnie, Brody and Summer and Mitch and Stephanie. There’s not even a narrow focus between, say, Johnson’s and Efron’s characters, which could have sparked an adequate buddy-buddy dynamic. Rather, it was like the screenwriters were seizing an exploitative opportunity: Get all the hot people to make out, because it’ll be so much more delicious than an actual action-comedy story.

When I say “action-comedy story,” I really only mean action. Several daring stunts were pulled, but that didn’t rescue the overall picture. Not only is there a lack of an intriguing story, but the comedy is also unforgivable — rife with throwaway lines and reiterated, try-hard jokes like eating a salad (I know, I’m roaring with laughter too). A lot of the humor is seamy as well, ranging from an erection stuck in a lawn chair to irreverently caressing a corpse penis. Like other hard-R reboots, it adheres to the formula of gratuitous F-bombs, obnoxious dubstep music and overly sexualized scenes. However, its raunchy humor becomes asinine and its comedic dialogue turns lackluster, resorting to a dearth of excitement and twists. There’s no refreshing sense of comedy as the film hashes out these safe, lazy gags, which immediately drown without any lifeguard to save them.

Since “Baywatch” is based off of the original ‘90s program, it was such a shame that the film didn’t further satirize the outdated tropes of the alpha male gaze and crimes being investigated by unqualified lifeguards. Unlike the clever “21 Jump Street,” which was also rooted from an old television series, “Baywatch” misses the satirical aspect and doesn’t really poke fun at its preposterous concepts. It started off on the right foot with an absurdly brilliant opening title, playing off the ludicrousy of the past show’s theme. However, afterward, it ebbed into waves of exhausting comedy that didn’t showcase the mockery behind a surface culture, such as sensationalizing men’s and women’s bodies, or a dysfunctional scenario, like exploding fireworks to assail the enemy. Instead, the characters reinforced those elements by acting like they were normal and did not thoroughly question them, causing the movie to not be comically bawdy or ironic.

Verdict: Without a clear and focused plot, “Baywatch” washes out any wit and unpredictable entertainment with it. But, if you’re into objectification, then go ahead, ogle over some eye candy and bring tissues. Trust in me when I say this though: Less than halfway into the film, you’ll feel the story sinking like a punctured ship, and you’d probably want to be sleeping with the fishes by the end of it.