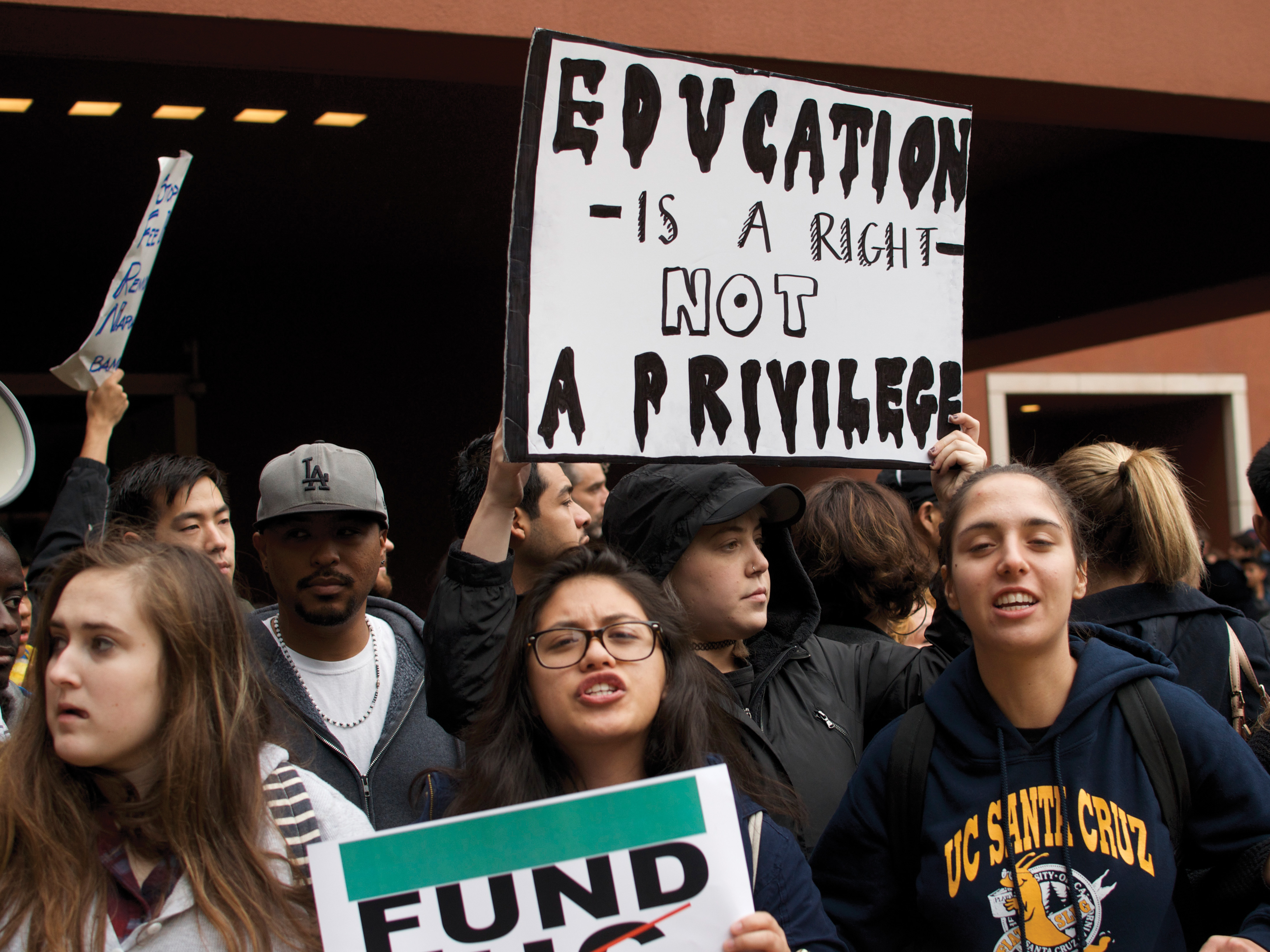 January 26, 2017 marked a pivotal moment in the UC system’s history, as the University of California approved a proposal to increase tuition by 2.5 percent, jumping from $11,220 to a new tuition cost of $11,502. UC President Janet Napolitano proposed the tuition increase as a result of increasing enrollment demands and a lack of increased state funding. As a result of this, UC campuses are struggling with higher student-to-teacher ratios and less classroom availability. This resulted in the tuition increase being proposed and ultimately approved.

Currently, the University of California system faces a debt of $17 billion. This is a very valid concern for the UC administrators that must be addressed. However, raising the tuition and forcing students to pay more for higher education is not the solution. Despite many students receiving financial aid, many of them still struggle to pay for increasingly expensive housing costs. The average student pays $14,500 to live on campus, and the average student living off campus pays around $9,800. Increasing the tuition only exacerbates this problem. The UC has begun enrolling more international and out-of-state students, since they have to pay an additional $26,682 in “nonresident supplemental tuition.” By admitting more of these students, the UC system is able to alleviate some of their deficit and raise revenue for faculty and renovation.

However, the state has put pressure on the UC schools to admit more resident students to counteract this wave of new non-Californian students. This leads back to the problems mentioned above, ultimately leading to the tuition increase. The reasoning behind increasing the tuition cost isn’t the problem, so much as its impact. The tuition cost of the UC system has doubled over the last ten years, resulting in the average UC student graduating with anywhere from $17,000 to $22,000 in student debt. This can hinder students’ future ability to purchase a car or a house, as they will be continuously paying off ever-increasing student loans. There comes a point when the cost of attending universities becomes so high that it may not even be worth it, and many students are worried that these tuition increases are reaching that point.

Napolitano has tried to alleviate the deficit in certain ways, such as admitting more out-of-state and international students, but there are other solutions to solving this problem. The first solution, which is to simply stop the tuition increase from going into effect, is actually already in motion, as high-profile California politicians, such as Lt. Governor Gavin Newsom and Assembly Speaker Anthony Rendon, are advocating to block or reverse the tuition increase. This has come in light of an audit of the UC Office of the President which revealed that Napolitano hid $175 million in reserve funds, as well as excessive spending on salaries and benefits for UC administrators. This has rightly been met with criticism from students and state politicians.

However, if this does not work, an alternative solution is to simply restrict the number of students admitted into UC campuses. UC Riverside accepted its biggest freshman class this year, with over 6,000 new Highlanders starting their college lives at UCR, and it does not look like it will slow down. I have already laid out the issues above, such as admitting more students increases the student-to-teacher ratio, which diminishes the quality of education, as well as decreasing the availability of classrooms, thereby increasing the number of students who may not graduate on time. Obviously, the more students there are attending UC schools, the more costly it is going to be for the UC system to operate, which is the problem it is currently facing. However, a tuition increase is detrimental for students in the long run in that it will only add to future student debt, which damages a school’s reputation.

Alternatively, by decreasing the number of students allowed admission into UC schools, the UC system can cut back on their costs and prevent the tuition increase from going into effect altogether. That way, the schools can ensure that the university is earning a return on their investments on exceptional students, since the school can ensure that all students will be able to graduate quicker and find profitable careers.

The 10 UC campuses are some of the best public universities in the world, but over the last couple of years, the quality of their education has been threatened by a lack of increased funds from the state, as well as an increasing student-to-teacher ratio across all campuses. Reducing the number of students admitted per year can help cut into the deficit, while also preserving the quality of education for current and future UC students. Raising the tuition would also achieve these goals, but the burden this would place on the students, in the form of rising costs now as well as growing student debt in the future, would outweigh the benefits of this decision. The UC schools are known for their excellent research and world-class education, but tuition increases should not be the only way to sustain this reputation.