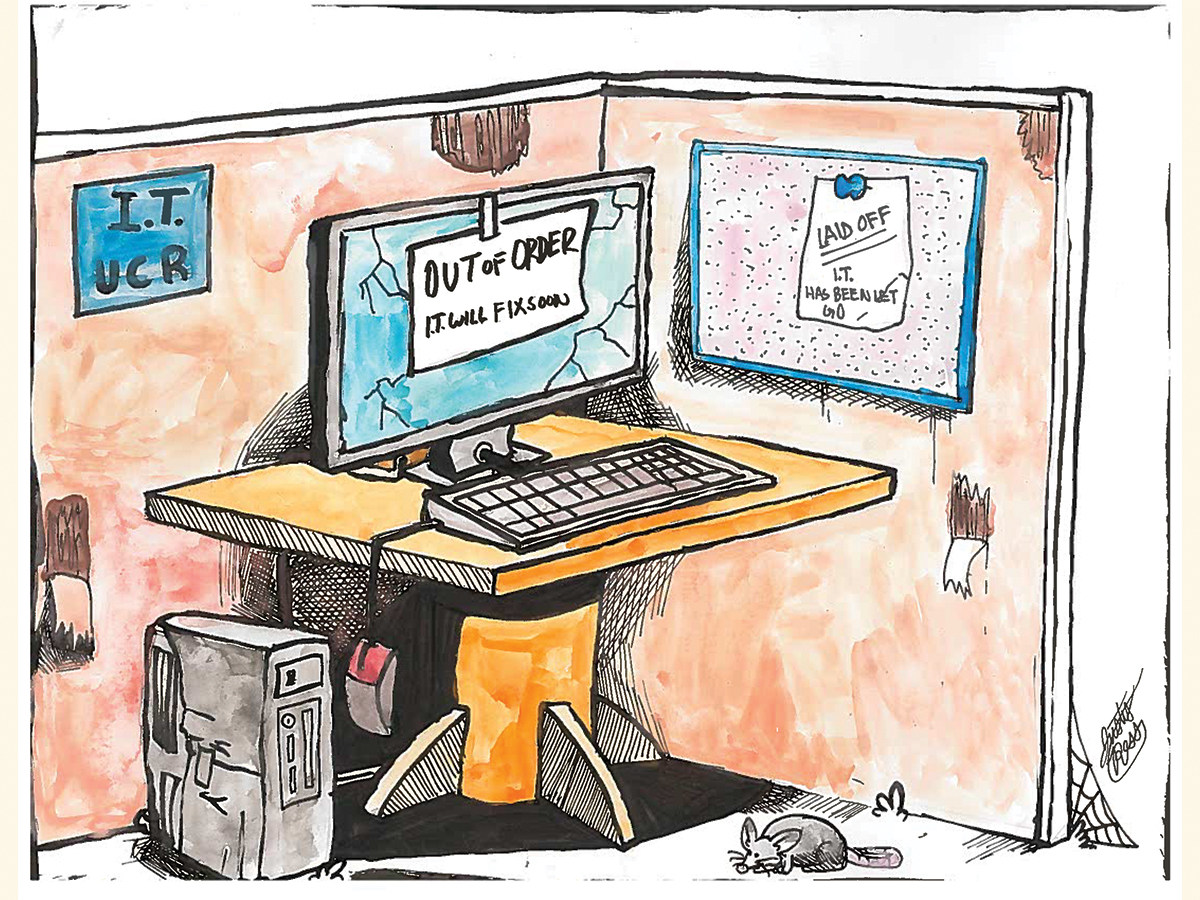 Recently, a spate of layoffs in the UCR Information Technology Solutions (ITS) has raised questions about the support students will receive when trouble inevitably arises with technology on campus, such as in campus computer labs, with iLearn and Growl and the laptop checkout program. A smaller IT staff will no doubt hamper UCR’s ability to provide students with timely assistance, which will impact students’ ability to access student networks, such as R’Web and iLearn, and slow classes that rely on technology to teach and turn in assignments. ITS’s mission statement stresses the importance of fiscal responsibility and customer focus, yet with malfunctioning computer labs, layoffs and students waiting hours to print, it is unlikely for ITS to continue to serve students as effectively.

On Monday, Oct. 2, Robert Newman was laid off along with 15 other IT personnel in a series of terminations which were explained by mixed, unclear reasons. Per the new chief information officer for the Department of Computing and Communications, Danna Gianforte, ITS could no longer afford the employees they had. However, Newman was told they were “going in a different direction.” Although this “explanation” was mysterious, the impact these terminations have on students is certainly not; several computers in Sproul 2225 that were down when Newman was fired were still non-operational over a month later.

However unfortunate, it is not unreasonable for a campus department to terminate employees on grounds of budget constraints. If they find themselves with significantly less funding for some reason, they should reduce any possible burdens while also attempting to balance the impact it will have on students. However, Newman expressed frustration at the fact that UCR would not negotiate or explain the reasoning for the layoffs. This uncertainty poses a problem for employees who can be terminated seemingly unexpectedly without a clear justification from the university. It is not unreasonable for staff to expect a discussion on the circumstances surrounding their layoff and it is unjustified for labor relations to remain silent.

Additionally, some of these employees were fired before major milestones in their career. Newman was fired just shortly before his 10-year anniversary at ITS, which would have entitled him to extensive health benefits. A colleague of his was fired just before their 20-year anniversary, which would have guaranteed them near full post-retirement coverage, undoubtedly a considerable expense for ITS. The optics of these terminations are undeniably poor as aging employees are left without proper medical coverage they have worked years to achieve. Without a reasonably transparent discussion from the university on the reasons for these terminations, laying off employees who are on the verge of receiving health benefits appears to be a coldly calculated and ruthless maneuver to cut costs via denying an employee something they worked decades to achieve.

The UC system prides itself on being an institution that educates Californians for the benefit of the state of California. With this in mind, they should ensure students’ smooth access to technology, especially given how much UCR’s various departments and classes depend on having functioning technology and an IT department that can quickly assist when it is not. For classes that are especially tech-intensive, or those that may rely on the school’s online services to submit assignments, much of what students do is online. Regardless of the budget constraints the UC system or UCR face, they have an obligation to provide students with the benefits of functioning technology.

These layoffs present an interesting conundrum: If UCR and the UC system as a whole plan on continuing to grow in the way they have been, how will a smaller IT department be able to assist a growing student body? If UCR plans to achieve a student body of 25,000 by 2020 and 30,000 by 2025, as their Physical Master Plan suggests, it will become harder for students to receive a quality education if they are relying on an understaffed technology department. With more students entering UCR every year, the growing demand will most certainly strain the already thinly stretched resources for school technology.

UCR needs to be more responsive to student needs and, above all, ensure that students have adequate access to the technology necessary for their classes and other campus services. If an organization is under a particularly austere budget, it is within their rights to fire employees deemed excessive. However, firing employees before major milestones is ethically dubious, and terminating crucial staff without notifying the campus community leaves the community in the dark about the burden it will place on them. The reticence and lack of transparency on UCR’s part has given students and staff further reason to question their preparation for inevitable campus expansion.