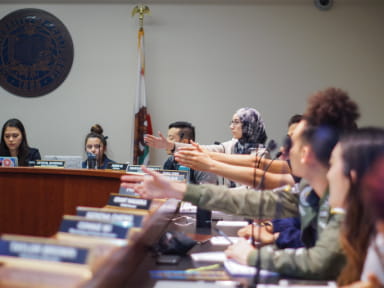 On Wednesday, Jan. 17, ASUCR senators officially voted to ban political parties in the 2018 ASUCR elections with a vote of 4-3-9.

At 7:03 p.m., Elections Director Taylor Brown introduced the Senate Bill on Political Parties, which she described as “a strikethrough of everything that has to do with the language of parties.” The bill’s only amendment raised the campaign expenses cap (the maximum amount of money a candidate can spend on a campaign) from $400 to $600. Brown explained that this vote was the senate’s opportunity to “listen to the students” and decide “whether we should save the status quo or make the change that we say we want to make.”

Executive Vice President Carisha Moore opened discussion on the senate bill allowing 10 minutes of discussion each for those for and against the bill to address the senate.

Transfer student and third-year English major Justin Domecillo was the first to speak, expressing his support for the legislation. “This senate bill is perfect for allowing students to feel heard,” said Domecillo. He spoke on the concerns of Costo Hall and members of the Diversity Council feeling excluded from the senate, stating that “oftentimes, (the senate) is elected because they have political party backings that people in Costo Hall might not have the ability to enter, be it economic or social-issue related. By striking down political parties, ASUCR makes very clear in a loud statement that they care about hearing student voices.”

Another student, third-year physics major Omar Asad, also expressed his disillusionment with ASUCR’s political party system. “With political parties it is highly impractical for an individual to gain success, to obtain a position that you all obtained last year,” stated Asad.

A representative from Asian Pacific Student Programs, who did not state her name, explained that by perpetuating a party system in the elections, “students will never be the priority but the fulfillment of a party’s and the preservation of itself, that is the number one priority of the party system.” She continued, telling the senators that “if you truly believe you are sitting in these seats because of the repoire you have built and the core values that you hold, you should have no reason or fear of an independent election system.”

Shortly after, students opposed to banning political parties were given the chance to speak. ASUCR Vice President of Finance Jose Cortez-Hernandez began by speaking of the benefits of parties. Cortez-Hernandez, explained that political parties “promote diversity” and cited elections code guidelines Part 2, Item 1, Section C, that require parties to reach out to other groups on campus and not solely be dominated by, in particular, an extracurricular activity such as Greek life. He further explained that parties help prevent corruption, stating, “there’s no one that’s a tougher enforcer of elections codes than the opposite party.” Cortez-Hernandez cited the 2014 elections in which there were allegedly over 30 election violation cases brought against rival parties.

Vice President of Internal Affairs Semi Cole similarly spoke in favor of political parties. Cole explained that ASUCR exists to better the student experience and that parties “make it more about a group of people rather than one person with an agenda.” He stated that political parties can have “diverse perspectives” and serve to advocate for all students. Cole stated that an independent system simply is not practical, saying, “there are 16 senators that sit on this board. Do you honestly think that someone will take the time to look at each and every one of their platforms? No.”

Cole was unable to comment before time of print.

President Pro Tempore Martin Cuenca outlined how ASUCR elections had never fallen below a 30 percent turnout rate until last year’s elections, a race that ran only independent candidates and netted a 21 percent turnout — just one percent above the minimum threshold for referenda to pass.

Prior to the banning of parties for last year’s elections, the controversial [YOUR]side party was set to run unopposed. Cortez-Hernandez, Cole and Cuenca were all members of their elected slate.

Ornelas moved to approve the bill to ban parties while Alkhalili seconded. The senate’s vote on the bill carried out in the following order:

The vote, evenly split, had to be broken by Moore, who voted yes on the measure. “Chairing meetings throughout the year and being a senator last year I was hearing a lot of students say they want political parties banned,” explained Moore in an interview following Wednesday’s meeting. “I see it as a great accomplishment for ASUCR. In the past with political parties, people were scared to get involved. Now that that’s out of the way, I hope people are more open to getting involved.”

In an interview with The Highlander after the meeting, Alkhalili, who was vocally opposed to parties, stated that “anyone who wants to run now has an equal chance to run. No one candidate has an upper hand or edge on anyone else other than their qualifications.” Alkhalili criticized the party system for politicizing ASUCR, explaining that student government should be a “united front for the students.” She added that “we’re (ASUCR) trying to make the student experience better on campus and so this isn’t a place for someone to step on another candidate or another student just to get what they want and political parties foster that.”

“Now, they (candidates) have to convince students about why … they need to vote for them,” said Alkhalili. “It (independent elections) will really filter out those who are just riding the coattails of the party.”

In a later interview, Asad expressed similar views. “The party system is flawed from a structural and fundamental perspective … (which) leads to a lack of representation of the general populace,” stated Asad. He also cited the political science principle of “first-past-the-post,” meaning that members of Congress in the United States are elected based on the candidate with the most votes wins the congressional seat and that the losing party or parties win no representation at all. Asad criticized this system, saying it is “flawed” and “favors a (binary) party system,” instead of favoring single transferable vote, which achieves proportional representation.

Asad has been one of the most vocal students at recent ASUCR meetings concerning political parties. Asad felt like he had a duty to “stand up for my fellow students” because “I was one of the individuals that was aware, and because I kind of have an understanding … because not a good amount of people knew about elections.” Asad continued, stating that he felt he could provide a “certain perspective and a certain level of eloquency that others could not provide.”

ASUCR President Aram Ayra, who brought forth the case against [YOUR]side to the judicial council last year, also expressed his satisfaction with Wednesday’s vote. “I was relieved that for once the system actually worked in favor of the students,” he stated. Ayra explained that, because UCR’s campus is proportionately smaller than other UC’s, parties have a higher likelihood of dominating elections. “On other campuses … one, the size of it (student government) is much bigger, and two, there’s enough big parties that balance each other out, there’s no instances where there’s one party endlessly dominating,” stated Ayra.

Ayra also provided his perspective on how this vote will affect ASUCR in the future. “My ideal view of ASUCR in the future is completely independent,” without political parties. Ayra suggested that there could be a point when the campus may change enough to where political parties may be feasible, though he does not think so. “At this point in time, and probably for the next five years or so, I don’t see that being a reality. Our system needs to be cleaned and opened up to establish student government to being open to everyone in the first place.” He added that if, in the next five years, there are a large number of people running, political parties may become suitable.

Ayra, however, favors a system where independent candidates run “completely issue-based campaigns being endorsed by program centers (and) departments on campus to show voters ‘this is what this person stands for, this is what they have done.’” In his view, having candidates backed by centers will produce representatives that advocate on behalf of these organizations but also maintain an extra level of accountability.

The next bill to appear was whether to allow laptopping, the use of a private electronic device to solicit votes from students. Le and Domecillo showed fierce opposition to allowing laptopping, citing cybersecurity risks. Nakaoka, who sits on the Referendum Student Advisory Committee, which oversees the Highlander Empowerment Student Services Referendum (HESSR) that supplies funding to Costo Hall programs, expressed concerns about how laptopping could affect turnout. His main concern was with the fact that 20 percent of students need to vote for a referendum to pass, explaining that if HESSR does not pass, the paid staff that run the ethnic and gender programs on campus will lose their jobs. Nakaoka later moved to table the bill so further discussion could be had, which was seconded by Ng. It was tabled unanimously, 16-0-0, and is slated to be voted on during this Wednesday’s meeting.