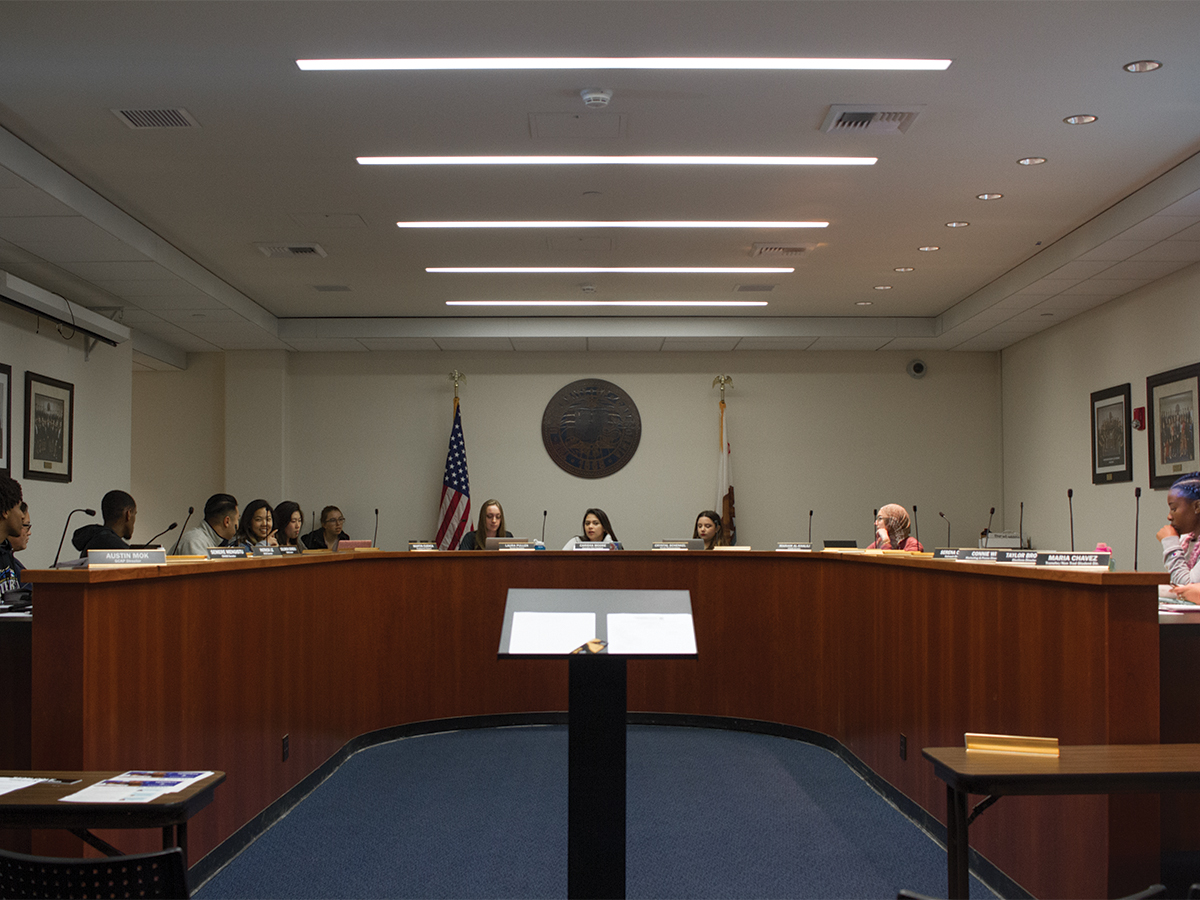 R’Gear earned a victory in the ASUCR Judicial Council late Tuesday afternoon as the justices overturned an executive veto, allowing the project to continue, according to the majority opinion delivered by Justice Peter Haddad. The case entitled Cortez-Hernandez, Cuenca v. Ayra, Moore, Li challenged the executive cabinet veto blocking the senate allocation for the R’Gear program.

The veto, signed by ASUCR President Aram Ayra, Executive Vice President Carisha Moore and Vice President of External Affairs Johnathan Li, was announced during the ASUCR meeting on March 7. In the day following, Vice President of Finance Jose Cortez-Hernandez filed for a review of the veto by the judicial council.

Cortez-Hernandez, who has been the most vocal proponent of the R’Gear program, argued during Monday’s judicial hearing that an executive veto on the senate allocation was unconstitutional, while Ayra asserted he and the rest of the executive cabinet (ECAB) acted out of necessity to save ASUCR.

The council heard both sides during the hearing, which was cut short because of time constraints. Traditionally, when a case is filed to judicial, the council accepts the case, conducts an investigation and then follows up during the next judicial meeting. However, since this meeting took place during week 10, Chief Justice Jo Gbujama decided to bring in both sides of the R’Gear argument, have them argue their case and allow the justices to ask questions in lieu of an investigation.

The majority opinion primarily addressed two issues: The efficacy of the veto without the context of a meeting, which Ayra admitted he did not call, and whether the executive cabinet has the power to veto a finance allocation.

Cortez-Hernandez was the first to present his argument, stating that ASUCR’s annual budget was $1,082,858 with expenses totaling $936,196. He argued that there is plenty of money to host R’Gear emphasizing that the program only costs roughly 2.96 percent of ASUCR’s annual operating budget.

Cortez-Hernandez also told the council that ASUCR has between $800,000 to $1,000,000 in reserves which, per his comments made in a separate interview with The Highlander, “does nothing for the students.” However, budget documents that closed June 30, 2017 provided to The Highlander show that ASUCR has $668,886.35 in reserves at time of writing. Though this number can fluctuate throughout the year, these reserves are meant to cover six months worth of operating costs for emergencies, which the above number fulfills.

President Pro-Tempore Martin Cuenca spoke to the council after Cortez-Hernandez, primarily citing bylaws and articles in the ASUCR constitution to bolster his point about the unconstitutionality of the veto. Cuenca said that since his work as President Pro-Tempore involves having a close examination of the senate bylaws, he found the veto “alarming.”

During his statement, Cuenca invoked Article IX of the ASUCR constitution, which states that a finance committee decision “may be overruled by an affirmative vote of two-thirds a majority of the present Senators when a quorum exists.” Cuenca elaborated, stating that the Article does not mention that power as applying to the executive cabinet. Cuenca also cited Article IV Section F of their constitution, a provision also cited by Haddad, which outlines veto privileges of the executive branch.

Ayra spoke next, stating that he acted for the good of ASUCR by vetoing the R’Gear allocation, in order to secure the “smooth and efficient operation of the ASUCR, a constitutional duty that both president and EVP (executive vice president) are expected to abide by.” He added that it is implied that the executive branch has the power if the organization is at risk especially because R’Gear’s approval violated numerous protocols and best practices norms that would “hurt the association as a whole.”

Ayra emphasized that “various unelected and elected officials” failed to get approval for the design from the office of the Vice Chancellor of Student Affairs before the allocation was passed by the senate, a process that had become common in past R’Gear initiatives. This is because the UCR name and logo will be emblazoned on clothing and therefore out in the public eye.

The approval from the VCSA office arrived a day after the veto was issued and more than a week after the senate voted to approve the allocation. “This means the senate allocated funds to an initiative that didn’t even receive the proper certification or approval from campus administration,” said Ayra, “underlining the haste and mismanagement that has been associated from this project from the very beginning.”

Ayra also cited the fact that the official written demand, or requisition, for the purchase order of the sweatshirts was not signed by the ASUCR president, which is normally practice with purchase orders “especially of this size and scope,” per Ayra. Relating to the purchase order, Ayra accused people associated with the initiative of pressuring professional staff into releasing the purchase order without having the requisition signed, which he said was a “big no.”

Moore also spoke about why she vetoed the measure, explaining that since she chairs the senate meetings, she must remain without bias during important issues and “doesn’t get much of a say.” Moore argued that the money slated for R’Gear could have been used in many different ways, while also acknowledging restrictions on the ASUCR budget, such as transferring it to another department.

She also said that arguing about the money and sweaters for so long was “ridiculous” because of the major issues that were being ignored. “Giving free sweaters to students is just saying, ‘I understand you have all these issues, I understand that you’re hungry, I understand that you’re going through anxiety but here’s a free sweater,’” stated Moore in sarcasm, eliciting supportive snaps from the audience. “‘As a senator, I’m going to pretend that these issues don’t exist because I’m not doing my job, so here’s a free sweater,’” finished Moore.

Reactions on social media were swift once The Highlander broke news of the judicial decision. One user, @omershomer wrote, “is there any rule in asucr that prevents stupid ass ideas from getting allocated $35,000” with another user, @marciee19, saying simply “#boycott R’Gear.” Another user, @ohmyshigupie, wrote “PART 398459384573984598 OF ASUCR BEING DISAPPOINTING.”

Some cast doubt on those that vetoed the allocation, however. Referring to Ayra’s twitter handle, “@asucrpresident vetod rgear?? #notmypresident they be actin like they never tried to get rgear before,” wrote @deedeechuang.

Some former members of ASUCR that were also for R’Gear provided their perspective. Kevin Tseng, 2016-17 vice president of finance said, “yeah… who wouldve thought you need an ACTUAL MEETING w/ an ACTUAL VOTE and w/ PROPER NOTICE??? boiiii you cant just sign a piece of paper and BOOM, LAW. props to the council.”

Current Vice President of Internal Affairs Semi Cole supported the council’s decision, tweeting, “I understand the frustration with R’Gear. And by no means is it a perfect project. But the issue at hand is our democracy, which is endangered when students engage in secret meetings and work to undermine the formal processes put in place for student voices to mean something.”

Ayra also took to Twitter to state that he and his colleagues “respect the Judicial Council’s decision and believe the rulings they brought forth were fair & unbiased.” He reminded students that the program will continue and hoped that “AS members who supported this expense will also support allocating funds towards other critical initiatives/aspects of campus.” In the last tweet on the decision, Ayra thanked students who supported ECAB throughout the process and “took such a hard stance against the RGear program.”

Cortez-Hernandez celebrated on Twitter, with one message reading, “Proud to announce that R gear will be happening this year! I look forward to bringing this initiative to the students! Release date as of rn is April 12th! Special thank you to the judicial council for stopping the illegal override that tried to take place!”

The reveal for R’Gear is slated, though not confirmed, for April 12 in the SRC North Gym.

is there a rule in asucr that prevents stupid ass ideas from getting allocated $35,000 https://t.co/17dccpxwV0

boiiii you cant just sign a piece of paper and BOOM, LAW. props to the council ✊️ https://t.co/Pp2OeoXd1I

I understand the frustration with R’Gear. And by no means is it a perfect project. But the issue at hand is our democracy, which is endangered when students engage in secret meetings and work to undermine the formal processes put in place for student voices to mean something. https://t.co/a5ps1asUhP

Judicial Council has released their decision regarding our ECab veto of RGear, deciding that the veto does not stand.

While my colleagues & I disappointed by the result, we respect Judicial Council's decision and believe the rulings they brought forth were fair & unbiased.

Proud to announce that R gear will be happening this year! I look forward to bringing this initiative to the students! Release date as of rn is April 12th! Special thank you to the judicial council for stopping the illegal override that tried to take place!