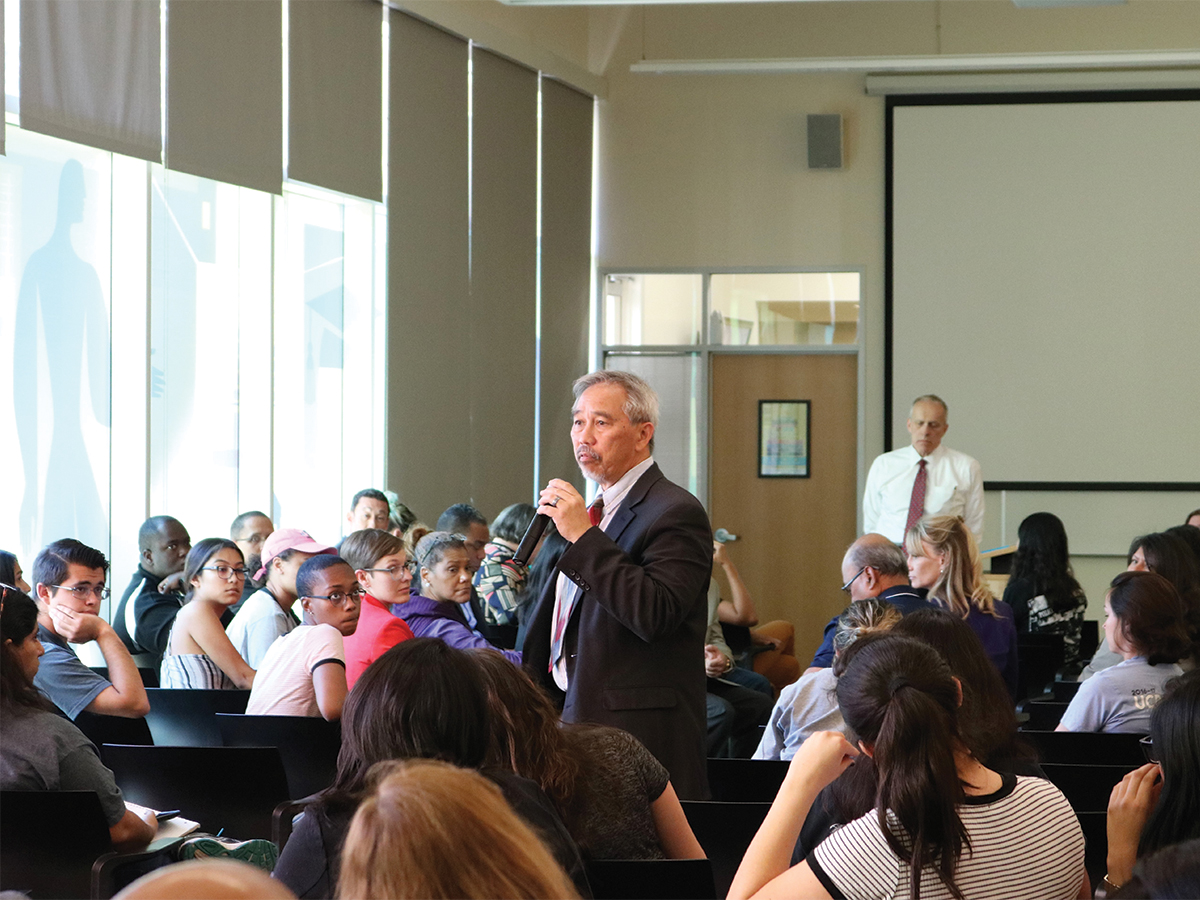 On Tuesday, May 8 at 3 p.m., about 80 students and staff involved with Costo Hall attended a nearly 2-hour long town hall meeting in the Tartan and Tweed Room inside the Student Services Building where they voiced concerns about a lack of administrative support to Executive Vice Chancellor Cynthia K. Larive, Chancellor Kim Wilcox and Dean of Students Joe Virata. Several individuals inquired about funding for Costo Hall programs, including Undocumented Student Programs (USP), an office that was established after the Trump administration removed the DACA program, increasing undocumented students’ risk of deportation. USP is currently not funded under the existing referendum, which passed in 2015 and is set to expire in 2020 if not renewed. The 2018 referendum would have added USP to the list of programs funded through student fees.

The discussion centered on the UCR administration’s failure to deliver on promised improvements that would enable the students to secure funding. Larive addressed student’s concerns, stating, “I think this was the first step in dialogue that will lead to action.” Larive added that the referendum led to a dialogue between administrators and students and said, “it’s clear that many people (are) feeling this and if we can look at this as a way to have had a discussion, then we will be moving this in a positive way.”

Some students also acknowledged that the town hall meeting opened up the conversation for administrators to listen to students’ unaddressed concerns. Victor Marroquin, a third-year global studies and philosophy major involved with Chicano Student Programs, was frustrated with how administrators have been promoting diversity as a way of “selling UCR” to prospective students and families. Marroquin opined that the programs at Costo Hall should be credited to the undergraduate and graduate students who spend their time, money and efforts toward building these programs. “Everything that we do to organize (these programs) is very grassroots and is very much on the labor of our students, the program coordinator and director. But the university will put it on their brochure and make it seem that they are doing this work but actually we don’t receive funding or any form of help from them,” Marroquin explained. “If you’re going to call yourself the most diverse university, you need to put your money where your mouth is.”

In an interview following the meeting, ASUCR CHASS Senator and Student Coordinator of Asian Pacific Student Programs Grant Nakaoka said that referenda are an inefficient way of enacting changes. He added that both ASUCR and Costo Hall are to blame for this inadequacy and described the animosity between the two groups as a result of miscommunication. ASUCR and Costo Hall, Nakaoka noted, “were not able to help out the students, but instead impeded them.” He further explained that “Certain members (of ASUCR) who were affiliated with Costo Hall … were the ones who were pushing for so many drastic changes in the elections committee bylaw.” Nakaoka added that these representatives were also “pushing for the dissolution of party affiliations and voting online … which led to the Highlander Empowerment Referendum being where it is now.”

In January, laptopping and online voting were banned in a 9-1-0 vote by the senate, but some students believe that this contributed to the low voter turnout and resulting inability to meet the passing threshold. If it had passed, the Highlander Empowerment Referendum offered the opportunity to declare permanent funding for Costo Hall programs instead of re-evaluating their HESSR funding every five years.

Students are hoping that, through continuing dialogue, administrators will understand the difficulty of securing funds for minority programs and how the existing policies could be reconsidered to facilitate support for Costo Hall.