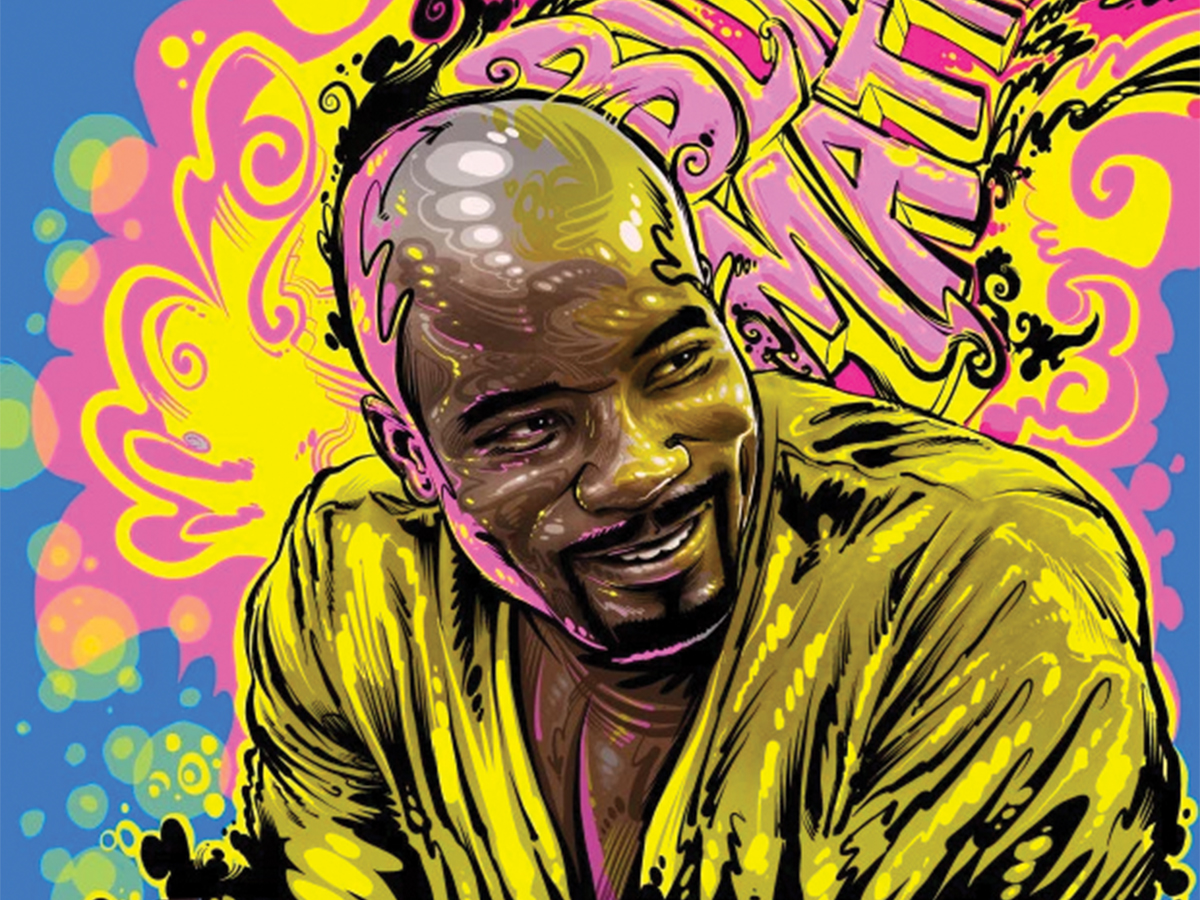 The second day of the “Uncaged: Hero for Higher” exhibition featured a panel discussion with artist duo Black Kirby, made up of John Jennings, professor of media and cultural studies at UC Riverside, and Stacey Robinson, assistant professor of graphic design and illustration at University of Illinois at Urbana–Champaign and Dr. Nalo Hopkinson, writer for DC Vertigo’s “House of Whispers,” at the Culver Center of the Arts. The panel titled “Experiencing Comics: A Conversation on Uncaged and House of Whispers” was moderated by UCR Lecturer Rachelle Cruz Sunday, Nov. 18 at 2 p.m.

“Uncaged: Hero for Higher” is described as a “critical race design installation” meant to analyze Marvel’s Luke Cage and his history within American comics culture as a representation of black masculinity. The exhibition explores the various representations of Cage’s character from “expressions of black respectability politics, the great migration, black patriarchy, black sexuality and subjectivity, the prison industrial complex, gentrification and cultural appropriation, medical apartheid, and black fatherhood.”

The “Uncaged: Hero for Higher” exhibition was organized by Black Kirby and UCR ARTS and was guest curated by Dave “D.W.” Griffith of Pop’s Barber Shop. The exhibition was co-sponsored by the Piranha Jones Memorial Foundation.

Jennings and Robinson began the talkback by sharing their first encounters with the character of Luke Cage. For Jennings, it happened in the early 80s after finding the art and storyline of one issue of Power Man and Iron Fist compelling. Robinson believes he got his first comic book from the handful of books his uncle, a comics fan, gave him. He connected with the Power Man and Iron Fist issue and admired their art. Hopkinson first came across Luke Cage after getting comics from her cousin.

During the talkback, Robinson and Jennings discussed one of their controversial images which depicts Malcolm X as the X-Men villain Magneto. Robinson claimed the piece is a reference to a quote by Stan Lee in which he compared Professor Charles Xavier  to Martin Luther King Jr. and Magneto to Malcolm X. “We connect those ideas simply without thinking about what those connections actually mean for black people,” began Robinson, “versus what this means for white people with a nation. I’m not saying that those two characters are similar because there’s no historical record of Malcolm ever murdering anybody while Magneto was a murderer of people.”

One of the themes explored by Black Kirby in the exhibition is that of the black male body. While Cage’s skin is bulletproof, Black Kirby argue that there are still negative connotations surrounding the black male body as hyper sexual, hyper masculine and hyper violent. “(It is) nothing connected to beauty or to anything positive because blackness is created to be the shadow of whiteness,” stated Jennings. “What happens when you shadow those stories? What happens when your shadow stories start to become songs and entities and become an agency? You start to look at the object without the shadow in a different way.”

Hopkinson also mentioned the effect the last episode of the first season of Luke Cage had on her loved ones. In that episode, the last scene was of a black man getting shot. “My primary partner, who is a black man, had a moment. Having to watch this even as fiction was just a little too real,” added Hopkinson.

The exhibition contains a case of books which serve as the bibliography for the show. One aspect of the exhibition is its use of Mos Def songs to play while attendants are looking at the exhibition. Many of Mos Def’s songs are also titles for the art pieces in the show, such as “Life in Marvelous Times” which portrays Luke Cage as an embodiment of the black experience.

One of the pieces from the exhibition, titled “Black Harlem Matters” has the phrase “black joy matters.” Above the word ‘joy,’ reads ‘Harlem,’ signifying the importance of Harlem in black cultural consciousness. Black joy is important for Robinson especially when considering Michael Coulter’s casting as Luke Cage in the Netflix show. “What I do like about the casting of Michael Coulter is he smiles, and he’s more complex,” began Robinson. “We do smile. We do laugh. I am angry all the freaking time, just to be relatively conscious in America, but in this we find these moments of joy. I actually think of those moments of joy as temporary utopias.”

When creating the exhibition, Jennings and Robinson envisioned redesigning the gallery space to be a place for black people and people of color. “Gallery spaces and library spaces weren’t made for us to be in,” began Robinson. “I wanted to create a space that brought together the marginalized community that is never invited to the art shows, to the gallery space, to the museums. etcetera.  Some of the comments that got from the people who are never invited to the space and who don’t go to the spaces were ‘thank you for putting us on the walls,’ ‘thank you for showing us, for showing our stories.’”

The design also was important in creating a space where taboo topics could be discussed, such as sex and religion. “Until we’re free, every art movement is a continuation of the previous art movement,” stated Robinson. “From the Harlem Renaissance to the Black Arts Movement to Afrofuturism, we are having the same conversation because we are not free. When you are trapped in a cage, and everybody else is outside of the cage, the only conversation is about getting out of the cage.”

“Or getting uncaged,” added Jennings with a laugh.

The conversation transitioned to Hopkinson who talked about “House of Whispers” and her transition from prose to comics. Written by Hopkinson and illustrated by Domonike “Domo” Stanton, “House of Whispers” is a new title released by DC Vertigo as part of Neil Gaiman’s Sandman universe, and explores blackness by focusing on the traditional African Yoruba religion.

Hopkinson mentioned how the experience would be for her readers who have no experience with comics. Many of Hopkinson’s readers are not into comic books because of the lack of representation. “If you walk into a comic book store not knowing what you’re doing there, it’s very intimidating,” Hopkinson added.

Yet Hopkinson also received comments from comic book readers who appreciate the representation in “House of Whispers.” Hopkinson stated, “The delight this (project) has been was to be able to say to Domo and the other artist working on it, ‘assume the characters are characters of color unless I specify that they’re white.’ That in itself is so radical.”

To end the talkback, there was a Q&A portion. Afterwards, attendants were able to purchase books from Hopkinson, Jennings and Robinson and view the exhibit. “Uncaged: Hero for Higher” is on display at the Culver Center of the Arts until March 31, 2019.