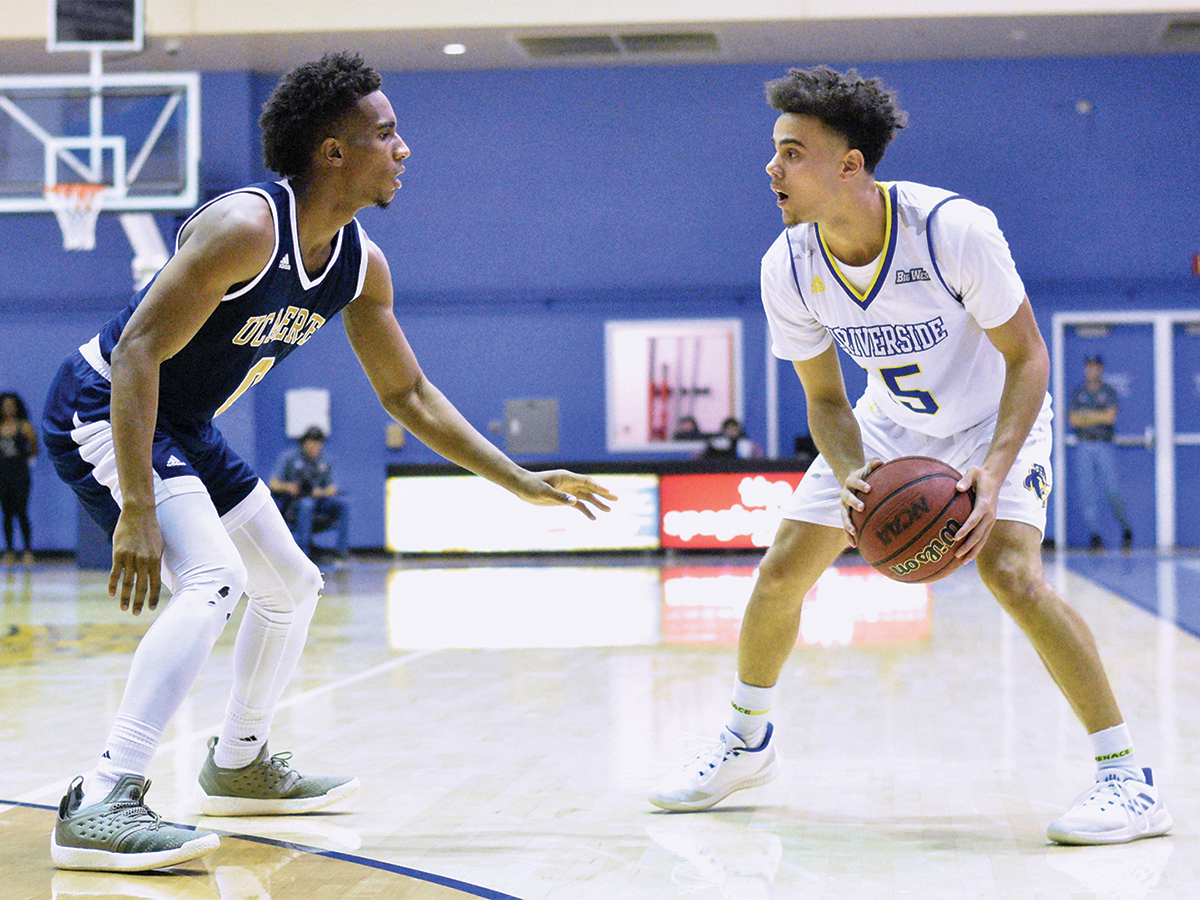 After an action-packed 40 minutes of basketball Wednesday night (Jan. 9), the UC Riverside men’s basketball team (6-11,0-1) went down to the wire against Cal State Northridge (7-10, 1-0), but fell 84-83. A three from junior guard Dikymbe Martin was just off the mark as the Highlanders lost their opening game of conference play.

UCR set the tone to begin the game, taking a double-digit lead within the first ten minutes. They’d go on to put up 40 points from range on 46 percent shooting in the first half, giving the Highlanders a 40-33 lead before break.

Unfortunately it was a tale of two halves for both squads, as CSUN took it up a notch in the second period, and UCR’s shooting cooled off. The visiting Matadors closed the halftime gap, and took a 48-47 lead with 15:43 left to go in regulation.

Despite CSUN matching their largest lead of the game of eight in the second half, the backcourt of Martin and first-year Dragan Elkaz kept their team alive, and made crucial plays during the final minute of play.

Martin then intentionally fouled CSUN’s Terrell Gomez, but he missed his two shots from the stripe. Then, following a timeout, coach Patrick drew up a play for Martin to win the game with five seconds remaining, but his three hit the side rim.

The Highlanders looked to bounce back from this nailbiter when they travelled up to Santa Barbara on Saturday for their first conference road game. However, after 20 ties and lead changes, UCSB (13-3, 2-0) ran away with the game at the end, topping UCR 72-64.

UCR played well for most of the game, winning the rebounding battle 37-27 and putting up 14 second chance points. The bench had a stellar game too, accounting for 27 of the team’s total points, compared to only six for the home team.

What ended up being the difference maker was Riverside’s turnovers, followed by the points they gave up from those turnovers. The Highlanders nearly had twice as many turnovers than the Gauchos, totalling 14 on the night. UCSB capitalized from these errors and poured in 27 points off of the Highlander turnovers.

UCR held a 34-32 lead at halftime, but yet again let their opponents right back into the game, giving up a 9-0 run to start the second half. Sophomore Ajani Kennedy rallied to get his team’s momentum going again after he hit a three and threw down a vigorous dunk that would hype up the Highlander bench.

After exchanging leads, Elkaz drained a three as the shot clock buzzer went off, giving the visitors a 56-53 lead. Unfortunately, this would be the team’s last lead of the game as UCSB held Riverside to a measly four points in the final eight minutes of regulation.

Kennedy was a huge factor off the bench, putting up 19 points, five rebounds, and two assists. Martin followed suit with a stat line of 16 points, four rebounds, and three assists.

UCR stays on the road as they play Cal State Fullerton Thursday, Jan. 17 at 7 P.M.