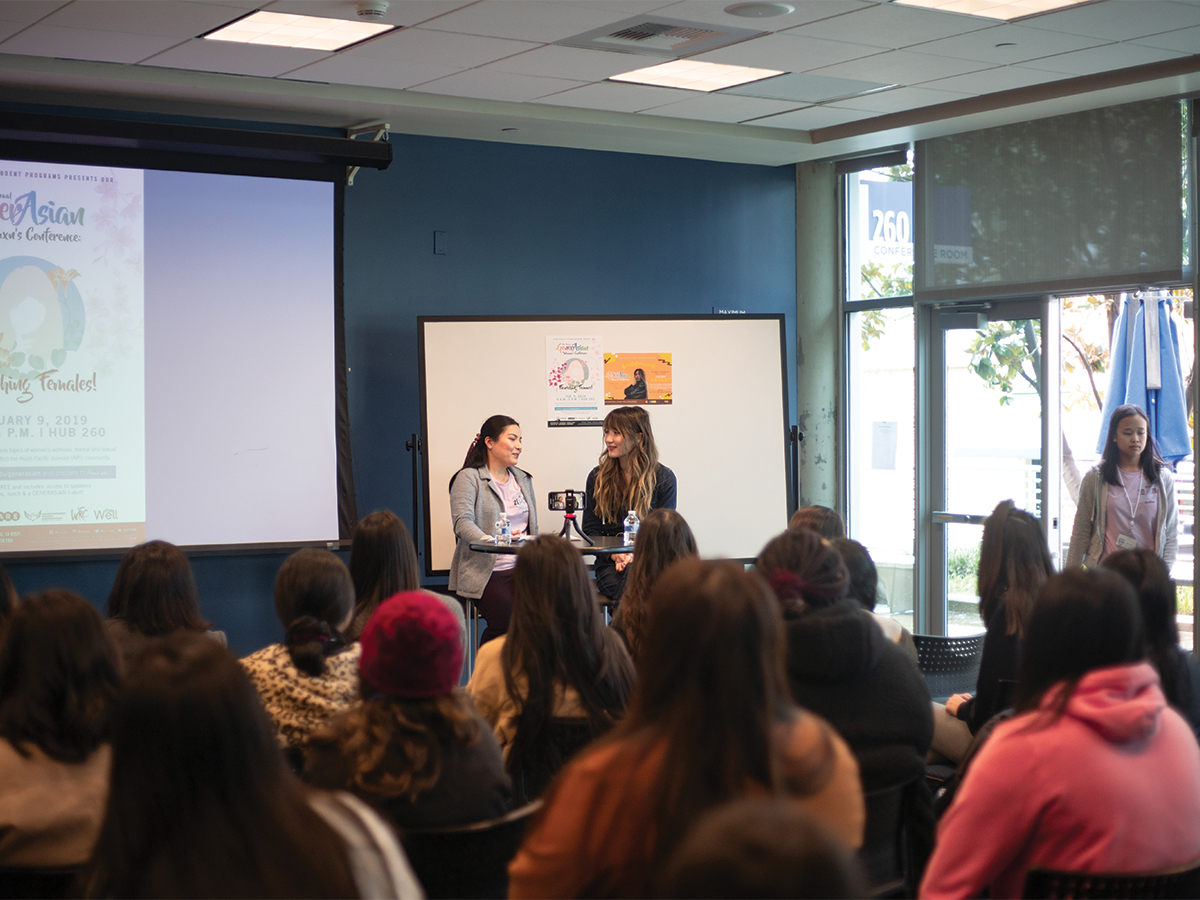 The conference began with the keynote speaker, Ashley, a UCLA film student and fashion YouTuber known as bestdressed. Ashley started her YouTube channel in 2015 where she would post videos about fashion and beauty. Now, Ashley has reached almost one million subscribers.

For Ashley, this milestone has been a surreal experience since she started gaining attention three months ago. Ashley discussed her background coming from a first-generation Asian-American family in suburban Maryland where YouTube was not favorably perceived, and she would have felt embarrassed have her peers found out about it. To this day, her parents are not aware of her YouTube channel. During the first two years of her YouTube career, she would only amass almost a thousand subscribers and 10 views on her videos. “I think that was the hardest part,” explained Ashley,  “working so hard every week and then just failing miserably and nobody caring. It was a part of myself that I wanted to express so at the end of the day it didn’t really matter what other people thought of me.”

According to Ashley, she has not encountered many challenges as an Asian-American woman on YouTube which is something she credits to the people before her. “I think on social media there have been so many girls before me who had set a precedent that paved the way for me,” Ashley explained. “I grew up watching Jenn Im and Michelle Phan, so it was accepted that people who looked like me were already dominating the space.”

“I think on social media there have been so many girls before me who had set a precedent that paved the way for me,” Ashley explained. “I grew up watching Jenn Im and Michelle Phan, so it was accepted that people who looked like me were already dominating the space.”

However, as a film student, she described the prejudice she experienced. “I think writers who are people of color are pigeonholed into writing about a certain type of experience when our writing can be about anything just like anybody else,” Ashley said.

Ashley, who is 20 years old, had been chosen as the keynote speaker for her relatability with other college students. Coming from a family affected by mental health issues, Ashley encouraged self-care among attendees. “Growing up, my mom was always like ‘Ashley, what are you going to do that’s productive today?’” Ashley began. “That’s been engraved in my mind like I always need to be productive. It’s so important to realize that taking time off and taking time to be with friends and family, that’s also productive.”

Some of the workshops at the conference were a sexual health workshop by the Well, a healthy relationships discussion by the CARE office, a how-to-brand-yourself workshop by Her Campus and a career panel featuring professionals within the industry. Among the workshops was “Not Your Mom’s Cup of Tea” presented by the Center for the Pacific Asian Family (CPAF), a non-profit organization in LA that supports Asian and Pacific Islander (API) survivors of domestic violence and sexual assault. In the presentation, CPAF discussed topics not commonly talked about within the API community such as domestic/sexual violence and mental health.

For third-year transfer and sociology major, Catherine Marcos, CPAF’s workshop was her favorite part of the conference. “I am a sociology major, so a lot of what (CPAF) discussed really resonated with me,” elaborated Marcos. “It’s stuff that I really care about, as well as the impact and being an Asian American in this community.” Marcos, a fan of Ashley’s YouTube channel, decided to attend her first GenerAsian conference when she saw the advertisements that Ashley was the keynote speaker. While Marcos came to the conference for bestdressed, she enjoyed the rest of the workshops as well. “It was really cool just to hear everybody talk (about what they) are passionate for,” Marcos said.

The first GenerAsian conference was held in 2010. For this year’s conference, the theme of “flourishing femmes” was chosen to be inclusive to gender nonbinary people within the community. Initially a speaker from the Queer Association of Asian and Pacific Islanders, a LGBTQ API organization on campus, was meant to hold one of the workshops. Unfortunately, the speaker was unable to attend due to illness.

When planning began in October for the conference, APSP program coordinator Tia Chea and the planning committee knew they wanted the conference to address issues of mental health and healthy relationships. “It’s definitely something we want to talk about and shine light upon because it definitely is taboo,” Chea explained. “We don’t talk about these certain stigmas all the time.”