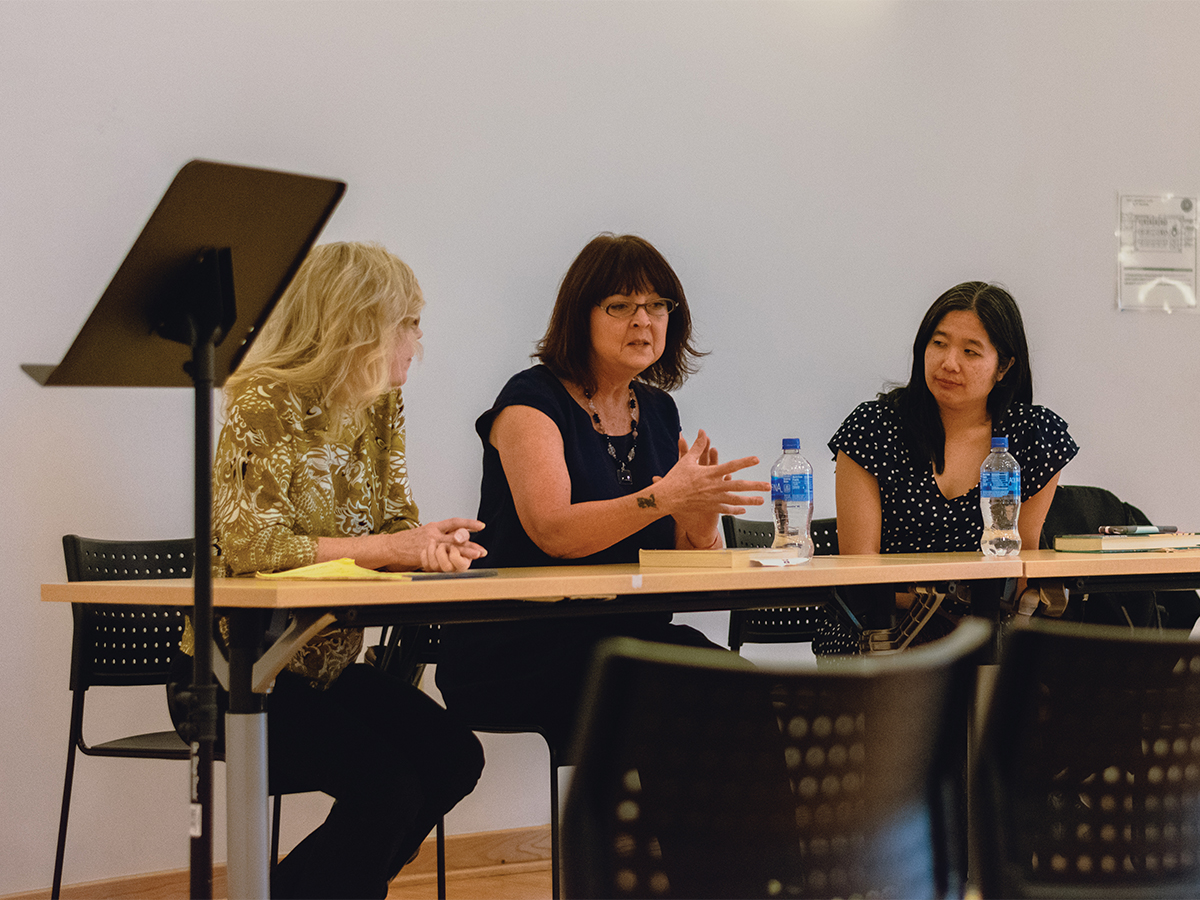 On April 11, from 3-5 p.m, the UC Riverside Creative Writing Department invited writers Vanessa Hua and Rahna Reiko Rizzuto to talk about their new books, “A River of Stars,” and “Shadow Child.” Creative Writing Professor Susan Straight also hosted a Q&A where the authors opened up about the reality of trying to get their work published and the roadblocks they encounter along the way.

“I asked these two authors to come because there are some fascinating parallels in what they’re doing but also because they’re writing about a lot of things I know my students are interested in,” stated Straight.

Hua is a UCR alumna and graduate from the Creative Writing and Writing for the Performing Arts MFA Program. She has received a Rona Jaffe Foundation Writers’ Award, the Asian/Pacific American Award for Literature, the San Francisco Foundation’s James D. Phelan Award and a Steinbeck Fellowship in Creative Writing, as well as honors from the Society of Professional Journalists and the Asian American Journalists Association. Hua is a columnist for the San Francisco Chronicle and has also published a short story collection called “Deceit and Other Possibilities.”

Rizzuto has previously published two novels, her memoir, “Hiroshima in the Morning,” and her first novel, “Why She Left Us.” Her awards and recognitions include an American Book Award, Grub Street National Book Award, National Book Critics Circle Finalist, Asian American Literary Award Finalist, Dayton Literary Peace Prize Nominee, among others. She is also a recipient of the U.S./Japan Creative Artist Fellowship.

Rizzuto began with a brief reading from her novel “Shadow Child,” a murder mystery that weaves together stories from New York City, Hawaii, the injustices of Japanese internment camps and the bombing of Hiroshima. She was inspired to write after discovering that her own mother, who was a Japanese American who grew up in Hawaii, had been a prisoner in an internment camp.

“My beginning as a writer was actually about finding a story that was fascinating to me that I wanted to uncover. There were always these secrets, my grandmother wouldn’t speak about it and my mother didn’t know so I began to try to fill these gaps in my family history,” stated Rizzuto.

Following Rizzuto, Hua read a few pages from her novel, which details the struggle of a pregnant Chinese woman who plans to give birth to her son in the United States in hopes of opening up opportunities for her and her baby. Afterwards, she spoke about the differences of going from being a journalist to a fiction writer.

“I feel like fiction can flourish where the official record ends. To me, research like court documents, that is like the floor, it should not be the ceiling or the limit because you are constrained by what you can discover but not what you can imagine,” said Hua.

With both Rizzuto and Hua choosing to write about different groups of Asian origin, they also addressed the difficulties that came along with representation. They did not want their stories to be viewed as the only story for a certain group of people and there was much pressure for the both of them to maintain authenticity. Hua mentioned how ensuring authenticity can especially be a struggle when writing about ethnic groups outside one’s own.

“It is a question that often comes up, can you write outside of your experience, is it cultural appropriation? But I think that it is all about the way you go about it, I feel what works best though it is having an established relationship with the different communities you are writing about,” stated Hua.

The authors also briefly went into detail about the process of becoming a published author. They shared how it could take from months to a decade to get one book published. Along with that, the process of finding an agent that they are satisfied with is filled with trial and error as well.

“It’s not a cut and dry occupation as a writer, you might start something and put it aside for even five to six years because you’re not ready to write it yet and when you come back to it the market might change. There’s no way you can control any of that,” stated Straight.

Towards the end, Rizzuto and Hua took questions from the audience. One topic that came up was about branding and social media. Hua expressed that while social media can allow authors to maintain connections with a community, people should not allow it to consume them. After the Q&A session, members of the audience were allowed to purchase copies of their books and get them signed by Hua and Rizzuto. There was also a raffle for two free copies of the book to end the book talk.

This talk was apart of the Sixth Annual Creative Writing Reading Series by the Department of Creative Writing. Past speakers have included UCR alumna and New York Times bestseller Fatima Mirza.