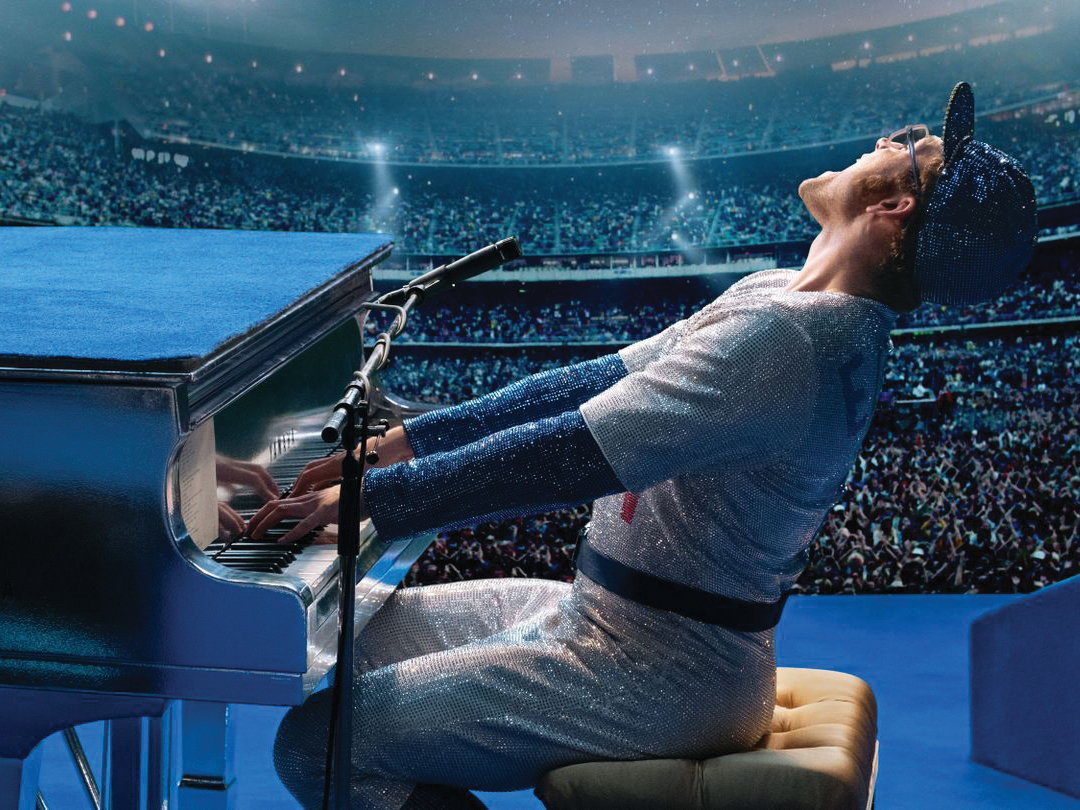 Following fresh off the heels of last years previous rock and roll biopic “Bohemian Rhapsody,” Sir Elton John film “Rocketman” takes a much more personal look at the artist in a more stylized manor. The film follows young Reginald Dwight as he partners with songwriter Bernie Taupin to become music icon Elton John. Along the way John experiences the highs and lows of being a rockstar as he is embraced by millions of fans while also struggling with drugs, alcohol and sex addiction behind the scenes. Unlike “Bohemian Rhapsody,” “Rocketman” is a musical that fully embraces the fantasy of the genre.

“Rocketman” stands out from recent rock biopics as it is unafraid to show the darker parts of the subject’s life and career. Many criticisms of “Bohemian Rhapsody” centered around how briefly filmmakers touched upon Freddie Mercury’s drug problems. This film shows no such brevity as Elton John’s struggle with addiction and depression are at the center of the film’s plot. This is even more evident as his residence in a rehab facility is utilized as a framing device for the film’s recounting of his life. The only real criticism of the film’s narrative, however, is that it occasionally introduces a story or aspect of John’s life without fully fleshing it out and instead moves on to the next chapter in his life. This results in several interesting stories, such as John’s brief marriage to Renate Blauel, feeling forgotten and underutilized by the filmmakers. Overall, the film’s plot entertains and moves smoothly from scene to scene largely due to its integration of song and musical performances.

Director Dexter Fletcher does a remarkable job at juggling tones as he manages to deliver on the fantastical musical numbers as well as the heart wrenching character moments. This is achieved due to the masterful integration of music into the film’s narrative as several songs from John’s legendary career are utilized to help portray the artist’s mindset in the given scenes as well as propel the plot.

Music is crucial to “Rocketman” as the film is not a run of the mill biopic but instead transforms Elton John’s life story into a musical. Rather than simply include music only when the artist is performing on stage, “Rocketman” integrates John’s songs into the narrative as characters spontaneously break into song and dance in magical and absurd ways. For instance, one such musical number that was featured in the trailer has John and the crowd float as he plays the piano. The beautifully shot and choreographed music numbers are a thrill to watch as they masterfully capture the mindset of the artist at each time in his life. To add to the impressive integration of John’s songs, lead star Taron Edgerton is remarkable and actually performs the vocals for all his songs. His voice is amazing, although it isn’t identical to John’s, it manages to capture the feel of each song and entertain the audience as if they were actually at a concert.

Speaking of Edgerton’s voice, he and the entire cast deliver on stellar performances throughout the film. Like Rami Malek did Freddie Mercury, Edgerton embodies Elton John.  He manages to deliver on both the highs and lows on the beloved artist’s life and career. John’s life wasn’t as bright and lively as his performances might lead some to believe, and Edgerton succeeds in capturing that fact. He manages to convey the emotion of hitting rock bottom and succumbing to drugs, alcohol, and depression all while delivering compelling and entertaining musical performances throughout.  Co-star Jamie Bell, who plays Elton’s longtime friend and songwriter Bernie Taupin, plays off Edgerton wonderfully in each scene they share. The duo perfectly captures the brotherly love that the two had for each other and Bell expertly portrays Bernie’s concern for John as his friend pursues a path of self-destruction. Additionally, supporting performances from Richard Madden as the heartless manager John Reid and Bryce Dallas Howard as the unaccepting mother of John. Both actors deliver standout performances as Howard is hardly recognizable, and both offer great character moments for Edgerton to respond to. Even the child actors who play young John manage to deliver worthwhile performances. Even though Edgerton does most of the heavy lifting when it comes to singing and performing, the supporting cast each get their moment to share the musical spotlight and shine brightly alongside the lead.

“Rocketman” is an endearing and personal depiction of Elton John’s iconic career and difficult life. Unlike other biopics, this film is unafraid and willing to show both the highs and lows of John’s life while also delivering on stunning musical numbers throughout. Each member of the cast performs spectacularly, but none more than the film’s lead. Edgerton embodies Elton John and impresses as he manages to sing and perform all of John’s hits. “Rocketman” undoubtedly manages to entertain audiences with its fantastical musical take on Sir Elton John’s story; while also providing intimate looks into the icon’s life and career.

Verdict: “Rocketman” entertains with its remarkable musical performances and fantastical interpretation of the music icon’s life and career. Stunning performances from its entire cast, and a standout performance from lead Taron Edgerton make Elton John’s musical biopic a must-see.