Emerbee’s, the new dining facility on campus, formally opened its doors to over 200 students on Thursday, Oct. 3, with a celebration event that lasted from 11 a.m. to 1 p.m. The grand opening event featured free giveaways with purchase, bee-themed treats and finally, a ribbon cutting ceremony and speech from the chancellor.

In an interview with The Highlander, Benjamin Eisenstein, the marketing and strategic communications manager for UCR Housing, Dining & Hospitality Services stated “It’s the first brand new dining facility we’ve opened on campus since 2014 which was the Market at Glen Mor.”

Eisenstein stated that unless students were taking classes in the Multidisciplinary Research Building (MRB) or Materials, Science and Engineering (MSE), they might not know where Emerbee’s is located so they held the grand opening event to draw students in. According to Eisenstein, “every transaction that happens at Emerbee’s, a portion of that is going to benefit bee research on campus” as part of their collaboration with UCR’s Center for Integrative Bee Research (CIBER) from the department of entomology.

The celebration featured various organizations with different giveaways and interactive activities for students to enjoy. The first booth was hosted by CIBER, who had an observation hive and honey sampling for students to see how bees interact with each other and produce the honey that will eventually be sold at Emerbee’s. The Emerbee’s management team had a giveaway booth where students had the opportunity to spin-to-win a variety of reusable tumblers, Emerbee’s branded sunglasses, beeswax-infused lip balm and t-shirts. Finally, the Nestle Starbucks division, which partners with on-campus cafes that sell Starbucks coffee, also had a booth where they were giving away 250 reusable Starbucks cups to students with proof of purchase to promote sustainability. 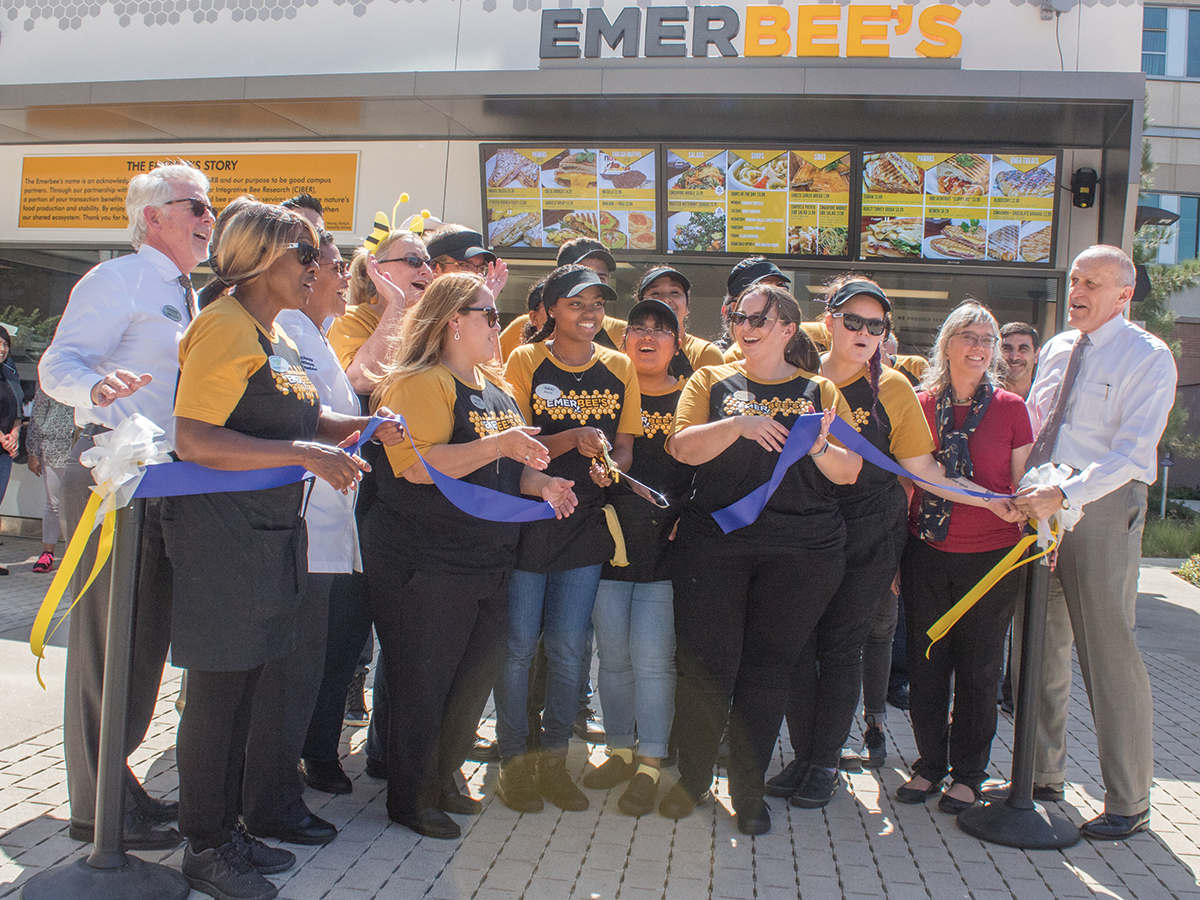 When asked about the finalized menu, Eisenstein stated, “It’s very panini focused. We have breakfast paninis during breakfast hours and then at 11 o’clock is the start of the lunch menu that also lasts until dinner.” The finalized menu includes a variety of different breakfast and lunch items such as Stuffed French Toast, the Harvest Wrap, Singapore Noodle salad and the vegan BBQ Jackfruit panini.

Their desserts, which are referred to as Emer-treats, include blueberry, cinnamon or chocolate banana pastries and Emerbee’s will feature some honey infused drinks such as the Honey Cinnamon Latte and the Honey Steamer.

The ribbon cutting ceremony began at 12:15 p.m. and started with a few words from the Executive Director of UCR Housing, Dining & Hospitality Services David Henry who stated, “the campus is going through so much transition and growth and it’s exciting to see that we’re opening up new options that bring delicious nutrition and sustainability to the campus.” He went on to explain the name and concept of Emerbee’s and their goal to use the new dining facility as a platform to highlight what the department of entomology and CIBER are doing in their bee research.

Barbara Baer-Imhoff, an assistant specialist in pollinator health, used her speech to bring attention to the importance of bee research on campus. Baer-Imhoff stated that “through your contribution (to Emerbee’s) you can help us save the world, one bee at a time.” Finally, Chancellor Kim Wilcox conducted the ribbon cutti

ng ceremony after a few words of his own, showcasing his excitement for the new facility. He stated that Emerbee’s “is an edifice to some of the greatest science in the world and this makes a statement that it’s not just about the work, it’s also about the people and about the relationships formed here.”