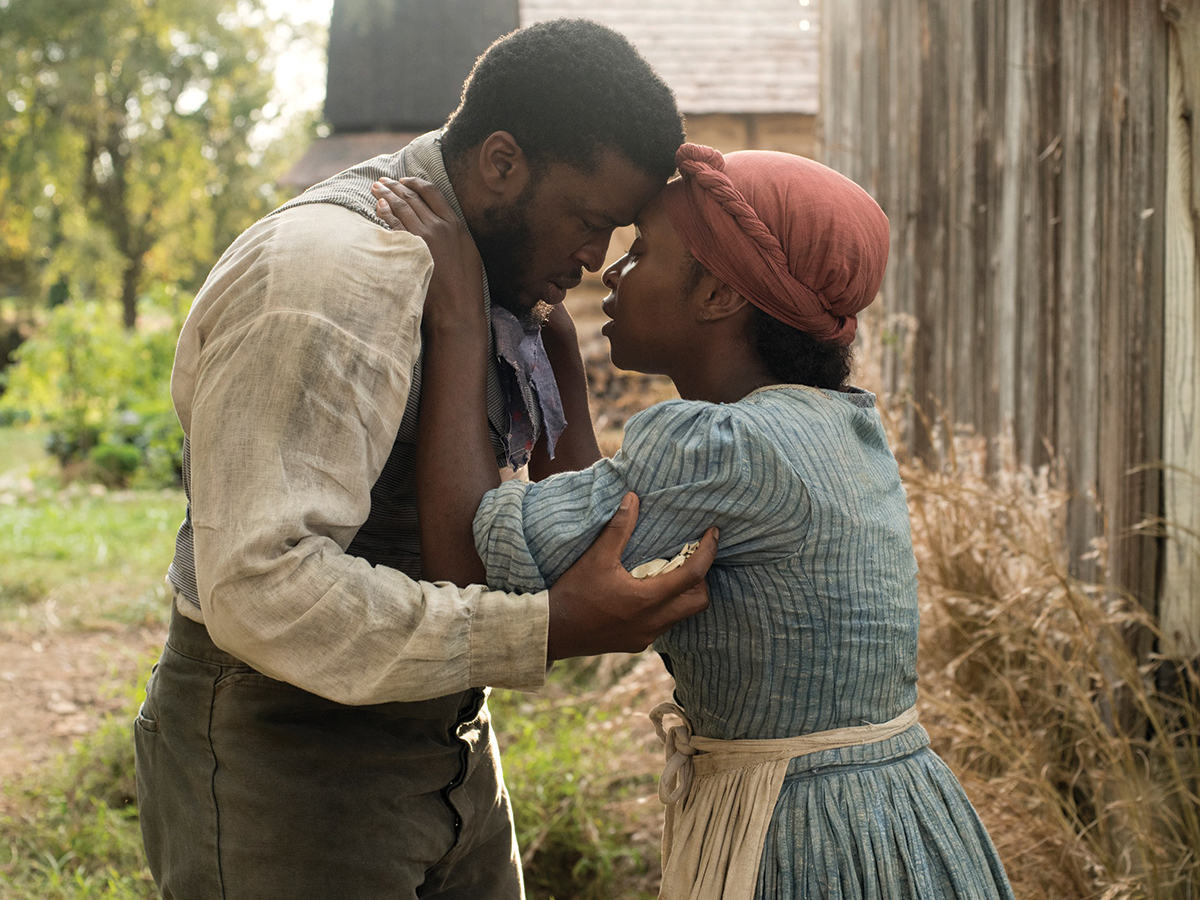 We are in the midst of a biopic season. January’s “Extremely Wicked, Shockingly Evil, and Vile” shocked audiences with its depiction of infamous serial killer Ted Bundy’s relationship to protagonist Elizabeth Kloepfer. In late November, “It’s a Beautiful Day in the Neighborhood” will profile the inspiring Fred Rogers. Now, it’s “Harriet” that will bring light to the suffering slaves endured in a war-torn 19th century America.

The film opens with Harriet Tubman (Cynthia Erivo), known as “Minty” at the time, embracing her newly-wedded husband John Tubman (Zackary Momoh), a free man. He works with Harriet’s father, Ben Ross (Clark Peters), who is also free. They work near her master Edward Brodess’ Maryland plantation. Brodess’ great-grandfather stated in his will that when Harriet’s mother, Rit, turns 47, she and all her children will be free. When Harriet and John bring this up to Brodess, he is outraged, declaring that her and her descendants will always be his property. After Brodess’ death, Gideon, his son, decides to sell Harriet. When Harriet learns this, she flees the plantation and is assumed to be dead.

Harriet made her way to Philadelphia, where she is greeted by William Still (Leslie Odom, Jr.), a black abolitionist. Harriet spends a year in Philadelphia but is haunted by her decision to leave her family behind. As a result, Harriet returns to the plantation to free her family and other slaves. Once she becomes an official member of the Underground Railroad, Harriet returns to the Maryland plantations repeatedly to free other slaves. She transformed the lives of those around her through her strong faith and earns a new moniker: Moses, the slave liberator.

Erivo’s performance as the famous abolitionist cannot be overlooked. She took on the essence of Tubman’s bravery and was able to translate that onto the screen. Despite her fantastic performance, “Harriet” received backlash prior to its release, particularly due to the casting of Erivo. Erivo is a British actress of Nigerian descent — a far cry from Tubman according to some critics of her casting.

Nevertheless, the film is still worthy of appreciation. Erivo is just an Oscar away from becoming an EGOT — an Emmy, Grammy, Oscar, and Tony winner — in record time. She clearly put her acting and singing skills to use, especially in one emotional scene where Harriet sings a song to her mother when she is about to escape the plantation. Many slaves used music to cope with their labor, and some used it as a form of code. These coded songs were usually riddled with biblical references, such as Moses freeing the slaves — which served as a code to start escaping the plantation. As a result, music plays an integral part in “Harriet,” as there are several scenes where Harriet uses coded songs to guide escaping slaves.

Supporting cast members of “Harriet” cannot be ignored. Peters’ performance as Harriet’s father was both emotional and humorous, allowing for his character to be more humanized. Although his moments were brief, Momoh’s performance provided rich context for the way black people were treated in 1850’s America. Despite being a free man, Momoh’s character still struggled and was treated as subhuman by other whites, showing how tough life was for black people in this time period. Odom’s portrayal of William Still shed light on not just racial inequality, but gender inequality. In the beginning of the film Harriet doubts her ability to help free slaves because she is a woman. Gender inequality is an important part of abolitionist history that created divisions amongst many abolitionists. The use of Odom’s character served to bring up other societal problems in a practical way.

Don’t expect gory scenes of slave owners abusing slaves in this film. “Harriet” is very mellow compared to grittier movies about slavery (i.e. “12 Years a Slave”). Depictions of the brutal and cruelty of slavery are definitely evident throughout “Harriet,” but are more subtle in nature. There are harsh scenes such as when Gideon slaps and ridicules Harriet, but most are subtle scenes that show the physical toll slaves endured, such as brief shots of whip scars on Harriet’s back. The cruelty of slavery is definitely toned down to focus more on Tubman’s journey towards becoming an abolitionist. Despite understanding this, “Harriet” should have taken more time to cover the brutality of slavery. Most of the brutality is shown through verbal abuse rather than physical. While this doesn’t undercut the cruelty of slavery, it should have been included to create a much more honest depiction of slavery in Tubman’s story. Overall, the film has a strong message about trust and purpose intertwined in Tubman’s actions of bravery.

“Harriet” is an emotional, thought-provoking film that tackles the life of powerful former slave and abolitionist Harriet Tubman. Audiences will not let Erivo’s portrayal be forgotten as she manages to deliver a captivating, encouraging and, most of all, memorable performance. “Harriet” is not afraid to address societal issues while also delivering a film focused on Harriet Tubman’s work and accomplishments. “Harriet” offers a satisfying film and positive entertainment based on real-life events.

Verdict: “Harriet” is a fantastic biopic that wastes no time establishing Harriet Tubman’s character. An inspiring depiction of the dangers of escaping slavery, “Harriet” offers an emotional story of Tubman’s bravery.