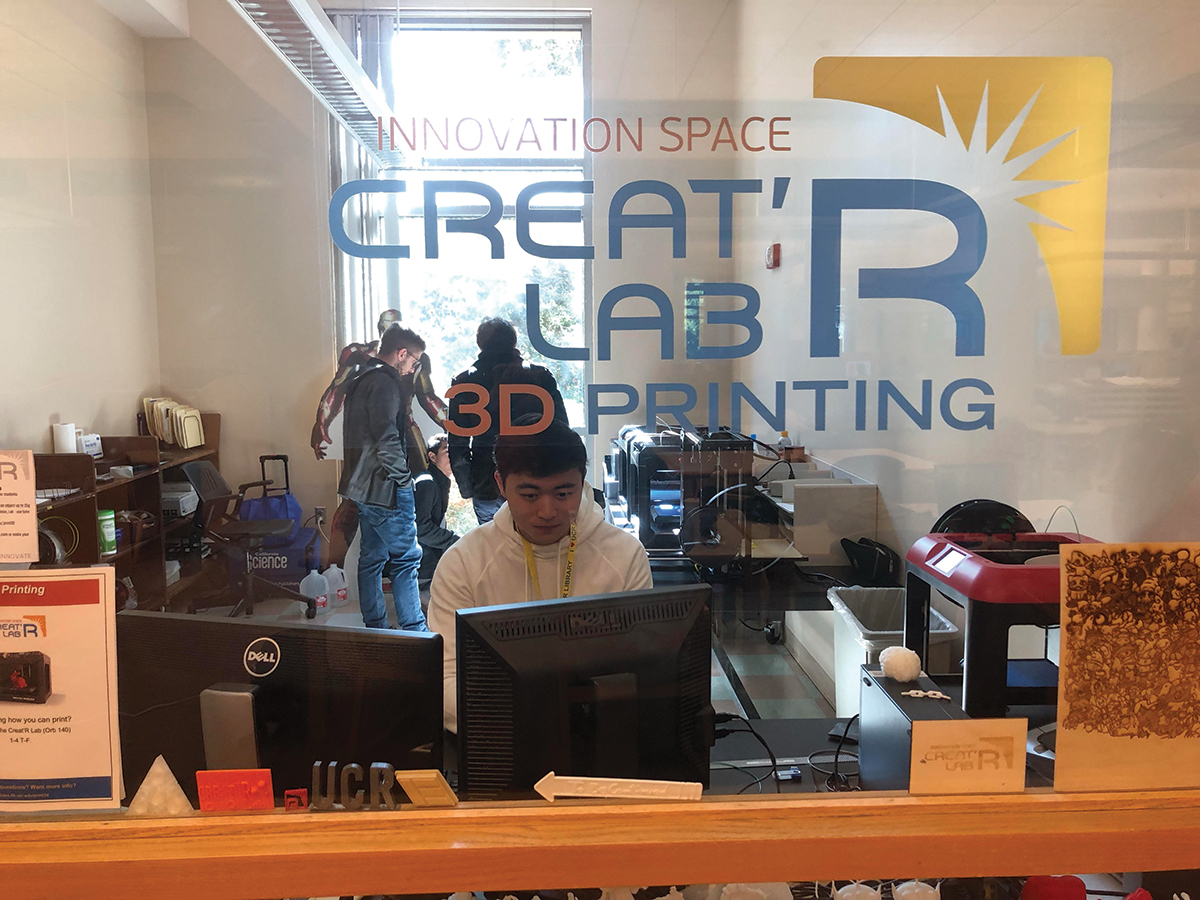 On the first floor of the Orbach Science Library is the Creat’R Lab where students are free to experience various gadgets from sewing machines to VR headsets.

The Creat’R Lab was started by UCR’s librarians approximately two years ago. One of the founders, Michelle Potter, still works at the Rivera Library. She worked as Orbach’s engineering librarian until four years ago. The space was primarily focused on students who needed 3D printing. The Creat’R Lab later became a makerspace, a communal place where students could explore their ideas and use new technology.

“I used to work with students in the sciences and engineering area, the graduate students all work in labs, and so do the undergraduates,” Potter said. “3D printing would allow them to have a prototype of whatever it was they were designing. So we wanted to explore the possibility of the library being a place where they could do that printing.”

The library started with one 3D printer, which students were eager to use. Eventually, new workshops dedicated to electronics allowed easier access to 3D printing. The faculty noticed its popularity and proposed that the printers have their own home. “We just said, ‘Wait, we just need a whole space and a whole student staff dedicated to making this place awesome,’” said Potter.

To raise the money for the printers’ new home, Potter mentioned that she and her coworkers partnered up with UCR’s Entrepreneurial Proof of Concept and Innovation Center (EPIC) to earn a grant for a makerspace. “We had space, but we didn’t have a lot of money to put stuff in it,” Potter said. “So we worked with them to design a space and put awesome technology (in it) so that students could try out all the new cutting-edge technology that are about making things.”

Cutting-edge technology, however, is expensive and difficult for college students to access on their own. The librarians wanted to give students easy access to such gadgets and create positive perspectives on the future of technology.

Potter gave further comment on the outcome of giving students access to technology, saying, “Virtual reality is the kind of thing that will change the world. The more people get to thinking about it the more people will think about how it could apply to teaching kids or apply to psychological therapies, or whatever they might be thinking.” Potter believes the more people think about greater applications the faster we’ll move forward to greater innovations.

The tech equipment in the lab makes students assume the lab is exclusively for computer science or engineering majors, which was initially the case — the space was meant to provide project resources for those majors. Eventually, though, the Lab opened up to students of all majors and all student organizations.

Jalak Patel, a fourth-year business administration major with a concentration in information systems, is a student employee who has been working there since her second year. She gives tours of the lab to students visiting for the first time and teaches and demonstrates how to use the gadgets to students. “When I give tours of this place, I like to show a pie chart that we have in the lab representing the four colleges and essentially it allows the big four majors of the school to come in and explore the equipment that we have,” said Patel.

One of the most frequently asked questions is if students have to pay to use the equipment. Patel reassures interested students that the lab equipment is free for all. “Our VR headsets are very new, and a lot of students have been coming here for that,” Patel pointed out. “We have four different versions of the headsets, with a bunch of games downloaded on there, so you can experience virtual reality through that.”

Katie Garwood, a second-year bioengineering major, shared her first experience at the Creat’R Lab. “She (Patel) showed us the paper cutting machines and sewing machines. The electrical stuff I thought was the coolest and I’m learning about them right now in class,” Garwood said. Garwood also discussed her interest in the Creat’R Lab’s Raspberry Pi, a small device that you can plug into a computer monitor that enables you to learn how to program in coding languages like Scratch and Python.

Besides their technical gadgets they also provide equipment for textiles, such as the sewing machines Garwood mentioned. Student led clubs such as the Cosplay Club come into the lab every so often to work on anime-inspired outfits. Students can use the sewing machines to fulfill any of their wardrobe desires, from simply hemming their shirts to crafting a whole costume.

“What’s really nice about the Creat’R Lab is unlike the library, where everyone is really quiet and all the desks are walled off, it’s a much more community-style space,” stated Christian Alvarado, a graduate student studying computer science. “It’s very useful, especially for the Game Development Club because we can all collaborate together, and it’s a nice bright space.”

The Creat’R Lab is open from Monday to Friday from 11 a.m. to 5 p.m. and closed on weekends.