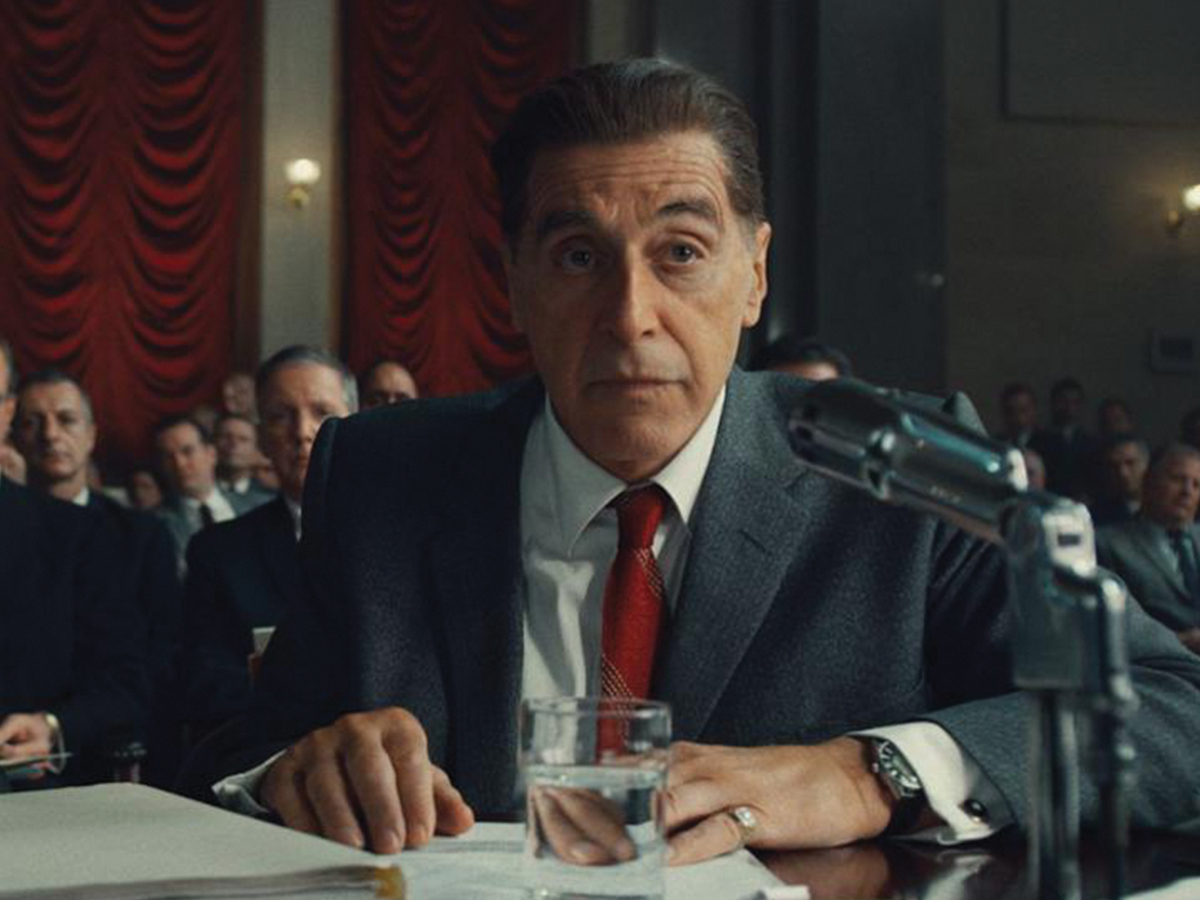 When film fans talk about the best filmmakers of all time, one name is sure to make everyone’s list: Martin Scorsese. Most known for his iconic crime films, it’s been over 10 years since his last gangster movie, 2006’s “The Departed.” Now, Scorsese has finally returned to the genre that has become synonymous with his name with Netflix’s “The Irishman.” The film features a who’s who of mob movie icons, such as Robert De Niro, Joe Pesci and Al Pacino. More importantly, “The Irishman” marks the first time the trio has worked together on a film with Martin Scorsese.

“The Irishman” is based on the 2004 narrative titled “I Heard You Paint Houses” as it follows the life of mafia hitman Frank Sheeran (Robert De Niro), the titular Irishman. Told in retrospect, the film accounts Sheeren’s career as he starts as a hitman for the Pennsylvania mob and moves on to be a bodyguard and confidant of the infamous Teamsters president, Jimmy Hoffa (Al Pacino). Along the way, the film shows Frank as he juggles his responsibilities to the mob and to Hoffa as the two sides slowly become more strained over the years; the film culminates in a possible explanation to the real life mystery of what happened to Jimmy Hoffa.

The greatest draw for this film is undoubtedly the cast of Hollywood legends. The film marks the first time De Niro, Pesci and Pacino have worked together on a film. Each of these three deliver exceptional performances as they convincingly embody the roles they took. De Niro shines as the film’s primary focus and narrator, Frank Sheeran. We witness his career as a mafia hitman and as he forms strong bonds with mob boss Russel Bufalino (Pesci) and Jimmy Hoffa. De Niro beautifully conveys Frank’s inner conflict as he becomes increasingly torn between his responsibilities and friendships with Hoffa and Bufalino as the two become increasingly at odds. Furthermore, we see how big a toll Frank’s career has taken on his family life as De Niro perfectly portrays his anguish in a few moving scenes toward the end of the film.

Joining De Niro as Pennsylvania crime boss Russel Bufalino is none other than Pesci. Despite De Niro being the clear lead, the first half of the film belongs to Pesci as he steals every scene he is in. His performance is so different from anything we’ve previously seen him in. He still plays a gangster, but typically he plays a murderous sociopath such as in films like “Goodfellas” and “Casino.” This time around, Pesci plays a much more subdued gangster who instead runs things from the top rather than getting his own hands dirty. He expertly convey’s Bufalino’s intelligence and beautifully plays off De Niro in the scenes they share. If Pesci dominated the first half, the second half belongs to Hoffa. Pacino is electric as Hoffa; he remarkably captures both his quiet intimate moments as well as the loud and explosive episodes both Pacino and Hoffa have become known for. When he’s on screen with De Niro or other mafiosos, Pacino controls the room as he captures Hoffa’s natural charisma. Like Pesci, he works great off his screen partners and delivers on a stand out performance in the film.

The core trio carry the film but are by no means alone in their exceptional performances. Some of the film’s supporting cast standouts include Ray Romano, who plays Bill Bufalino, Russel’s cousin and acts as an attorney for Frank and other key players in the mob and the union. The scenes he’s in, though few, are memorable and offer a few moments of humor, as would be expected from a comedy star like him. Another comedian that joined the film’s cast is Sebastian Maniscalco, who plays the hot headed mobster “Crazy” Joe Gallo. In fact, Maniscalco’s character is reminiscent of past Pesci characters as he comes across as a gangster that could go from calm and collected to crazy and murderous at the drop of a hat. He stands out in the scenes he’s given and helps flesh out the world of organized crime shown in “The Irishman.” The last supporting cast member worth drawing extra attention to is Stephen Graham as Anthony “Tony Pro” Provenzano. As a high ranking member of the Teamsters, as well as a mobster, Provenzano shared several great scenes alongside Pacino’s Hoffa, often as rivals. The shouting matches and stare downs that came about when these two shared the screen were a thrill to watch and Graham’s performance managed to hold its own opposite a legend like Pacino. Though only a few of the supporting cast are mentioned above, it is worth reiterating that every cast member is spectacular even if they appear in only one scene.

When it comes to the film’s story, Scorsese and writer Steven Zaillian hit it out of the park. The film remarkably juggles the different eras of Frank Sheeran’s life, spanning from the 1950s all the way to his death in 2003. Adopting a narrative style, common among Scorsese crime films, Frank recounts his life from a wheelchair in a retirement home. From there Scorsese beautifully juggles the different eras and makes their transitions seamless. This is further aided by the main technical draw of the film: its use of de-aging technology. The main trio each plays themselves both young and old, utilizing CGI that can make them appear as they did in their 20s, 40s, 60s and so on. Only once did the effect seem jarring while De Niro was de-aged to his 20s, but that was short lived and otherwise never looked out of place for the rest of the film. Only in a few physical scenes, however, was it clear that these 40-year-old characters were played by men in their 70s. For instance, one scene had De Niro beating a guy on the street corner, and he moved like a man in his 70s, not his 40s. That said, the effects aided the storytelling, as it wasn’t necessary to switch actors between each decade, creating a nice sense of continuity between each era.

“The Irishman” proves that Scorsese hasn’t lost his storytelling abilities as he delivers on an instant classic. Expert performances from its core cast as well as a remarkable supporting characters make for a welcome addition to the genre. The story is compelling and despite the daunting three and a half hour runtime, the film never becomes boring as the cast and story keeps the film engaging. Despite occasional drops in quality, the visual de-aging of the core cast is remarkable as each actor truly looks younger.

Verdict: Scorsese crafts another crime classic with his latest film “The Irishman.” Phenomenal performances from both its main stars and extensive supporting cast make for a worthwhile viewing experience as they transport audiences back to the world of organized crime.