On Sunday, Dec. 2, ASUCR held their last meeting of the fall quarter. The meeting was originally scheduled to take place on Wednesday, Dec. 4 but was rescheduled for Monday, Dec. 2 for unknown reasons.

During the Approval of Agenda, President Pro Tempore Preeti Juturu pointed out that the Legislative Review Committee meets on Mondays to approve legislation. Juturu stated that according to Chapter 13, Section G of the ASUCR bylaws, the Legislative Review Committee must submit all new and updated legislation to the senate 48 hours prior to its vote. Since the ASUCR meeting was rescheduled for Monday, the legislation was not submitted to the senate 48 hours in advance of their meeting. Juturu then questioned if the senate was still permitted to vote on the legislation. Executive Vice President (EVP) Abigail Cortes stated that if the senate wished to vote on the legislation regardless, they could. The senate then voted to approve the agenda 7-5-1.

The meeting then moved on to Committee Reports. SB-F19-018: Amendment to Chapter XXXI: Revising Executive Cabinet Eligibility was discussed and debated in length by the senate. This bill intended to clarify what positions are intended to be considered a part of the executive cabinet versus the extended executive cabinet. The bill intended to clarify the one-year experience requirement for directors. The bill would clarify that directors do not need one-year of ASUCR experience.

The bill was initially passed 12-0-1, however, the senate then decided to amend their vote and discussed whether the marketing and promotions director should be required to have one year of experience. They also discussed whether or not the personnel director and undergraduate sustainability director should have one-year of experience. After discussion, the vote to require that these positions must have at least one year of ASUCR experience was approved with a vote of 9-3-0 according to the ASUCR meeting minutes. 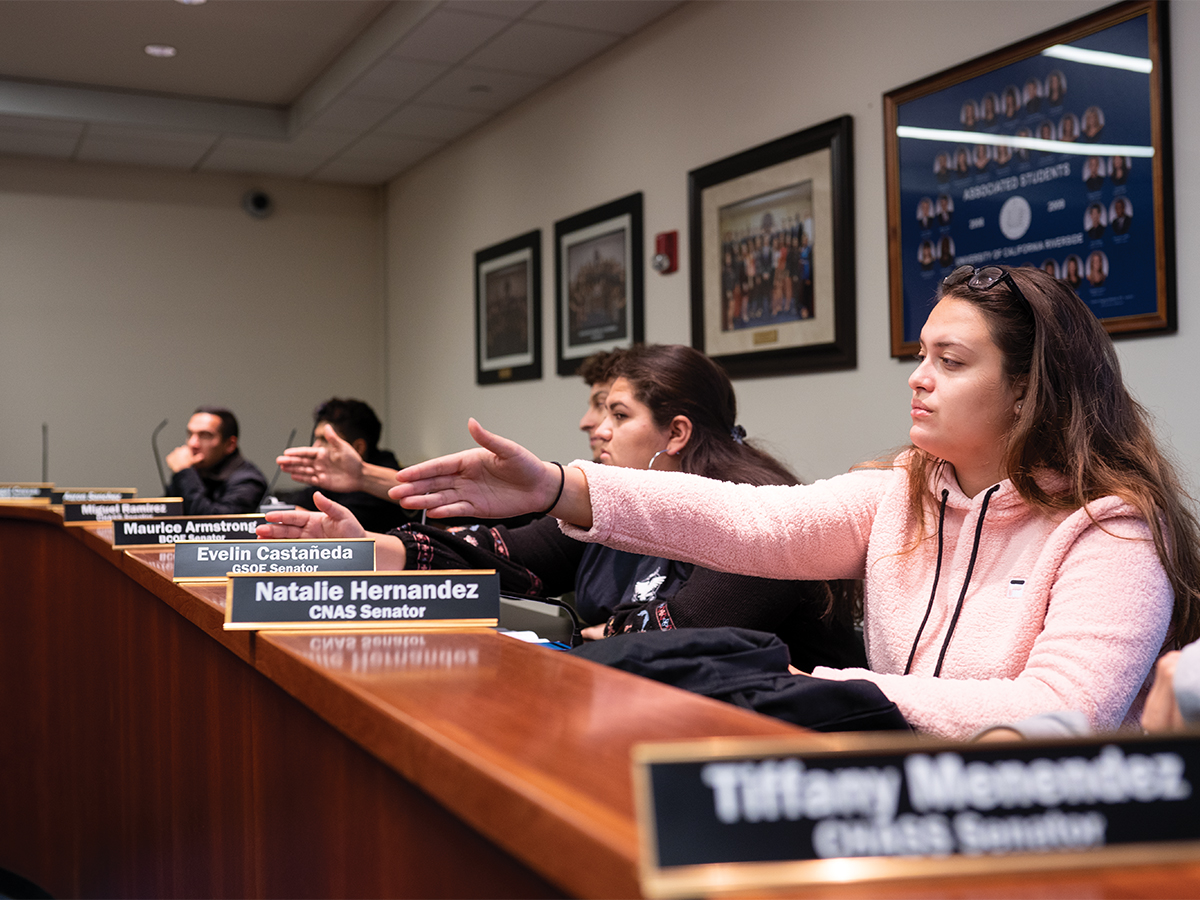 Transfer/Non-Traditional Director Eric Calderon approached the podium during Public Comment. Calderson stated, “I know that this meeting was rescheduled for today. I just wanted to see if it was within our rights to do so … times are set for meetings so that we remain transparent and ensuring that people are aware of what is going on … I just wanted to point out that it is important that we give proper notices in the case of emergencies like these that may occur.” Calderon went on to state that they need to make a stronger effort to ensure that students know when we are going to be here. “I think that giving short notice for things like these is always problematic,” said Calderon, “We have to work harder to ensure that the word gets out there.”

Calderon added that ASUCR should try to maximize the time of their meetings. He stated, “This is the only time we can all meet, deliberate and discuss. I think it is important that we utilize this time wisely. We should try to change our mentality and be excited to be here.”

After Calderon’s comment, Juturu also expressed her concern with the rescheduling of the meeting and questioned why the meeting was rescheduled. EVP Cortes stated that there was a conflict that did not allow them to hold the meeting on Wednesday, but did not specify as to what that conflict was.

The meeting then moved on to Roundtable and Announcements. GSOE Senator Evelyn Castaneda expressed her concern with decisions such as the rescheduling of the ASUCR meeting and previous closed ballot votes. Castaneda stated, “I want to reiterate that it is important that we receive 48 hours notice about the rescheduling of meetings. I also want to be aware of the reasoning behind small decisions being made such as the decision to partake in closed ballot votes without any reasoning.”

EVP Cortes expressed her concern with the lack of senator reports. Cortes stated, “That is pretty much the fourth week in a row that you haven’t given a report if you did not give one today.” She noted that the week prior they did not have a meeting, the week before that was the State of the Association meeting (where senators were not required to give a report) and the week before was when senators began to lack reports. She stated, “That is four weeks in a row that you have not gotten any work done. Keep in mind you are in this role and expected to create work. You should not be doing the bare minimum. You should be at least trying a little bit to have something to say at every single senate meeting. It is really disappointing to hear that so many of you do not have a senator report.”

The next ASUCR meeting will take place in