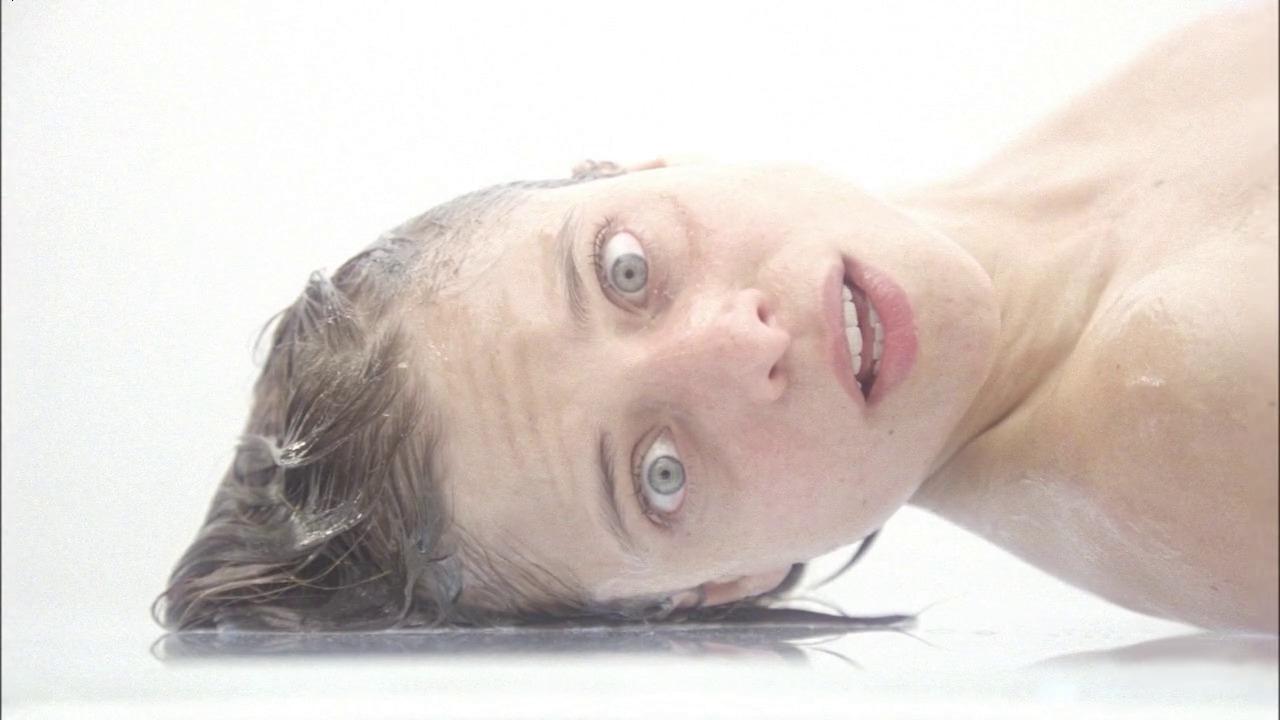 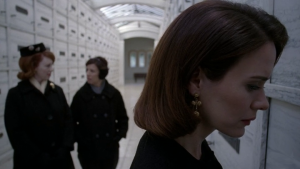 Viewers are finally shown the Lana Winters we’ve longed for: sassy, determined and channeling Jackie O as she struts her stuff in “Spilt Milk.” Just before her release, she promises Jude that she will return and expose all the horrors at Briarcliff. In present day, the episode unveils some highly disturbing, Oedipal interaction between Johnny Morgan and a prostitute in a scene that is intercut with the final confrontation between Lana and Thredson a.k.a. Bloody Face. The creative cinematography brings together the closest we’ll ever get to a family portrait of the Thredson-Winters family.

Although Sarah Paulson steals the show with this one, the writers unfortunately fail to deliver on Thredson’s demise. The only thing that saves this blunder from ruining the remainder of the hour is the cliffhanger we are presented with, as Kit and Grace, free at last and eager to start their new life together, find Alma waiting at the house with a baby of her own. Lana also undergoes a bizarre change of heart when she decides to keep the baby, insisting that there have been too many deaths. It’s an infuriating move—how can she go from being desperate enough to use a coat hanger to becoming strangely sentimental over the evidence of her rape? 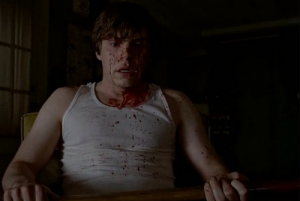 These events lead us into “Continuum,” the last episode before the season finale. It opens with a chilling scene that involves Kit pulling an ax out of Grace’s bloodied body (note the irony) as a toddler is heard calling for, “Daddy,” in the background. The story has jumped ahead several years in time since the conclusion of “Spilt Milk,” and Kit appears to have settled into his “Big Love” lifestyle with Alma, Grace and their kids. The dynamic and duality between the two women is skillfully crafted; Grace obsessively draws her alien abductors and talks about them with reverence, while Alma, who hates the aliens for their cruelty, is determined to forget. The tension between the pair escalates until Alma finally snaps, which reveals just how unstable she has become, when we were at first led to believe that it is Grace who is unhinged.

Alma is then committed to an even more dangerous and dilapidated Briarcliff. Since its handover to the state, the establishment has been flooded with correctional facility inmates. Judy Martin’s death has been falsified, and her new identity, Betty Drake, is no doubt the scheme of Monsignor Howard, who is now Cardinal of New York. Frances Conroy returns this episode without the black suit or wings, but instead as a tough queen bee at Briarcliff; she offers Judy the option of working with her or becoming crushed by her, mirroring Shachath’s proposal of life or death. The interaction between the two shows us that Jude still retains her fire and resists death at every turn, despite having been abandoned by all those who had promised to help her.

Lana—one of the aforementioned promise makers—who was basically crowned the show’s heroine last week, has since become a fame-seeking sellout; she is busy riding high on the success of her book and is convinced she has “found [her] voice.” She has completely renounced her lesbian relationship with Wendy and has exaggerated the account of her suffering at the hands of Bloody Face.

“American Horror Story: Asylum” has become a delightfully unpredictable show, thanks to show-runner Ryan Murphy’s ability to manipulate character development and plot to elicit just the right response from its audience. Despite the hopeful undertones in “Spilt Milk,” “Continuum” shows us that it is impossible to escape Briarcliff and its influence. The storyline is still full of holes that require resolution (e.g. Lana being hunted by her son in present day, the missing explanation regarding the aliens), but with only one episode remaining in the season it’s going to be a close cut. Nevertheless, the madness that reaches past the confines of Briarcliff adds a wholesome feeling to this season. We are reminded that “Asylum” is sick and twisted, through and through—no place is safe for its characters.