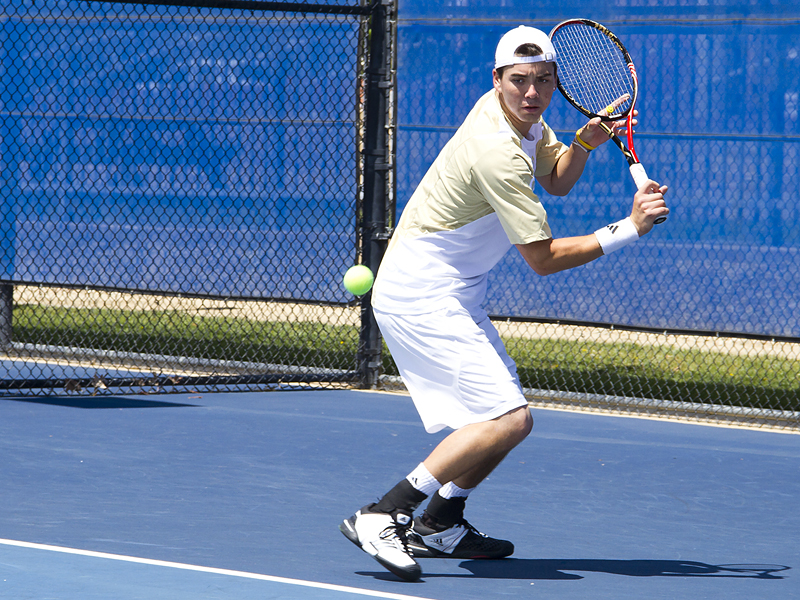 The UC Riverside men’s tennis team traveled to #67 ranked San Diego State to play at the Aztec Tennis Center but failed to get their first win of their 2013 season with a shutout  loss 0-7 against the Aztecs.

The doubles action for Riverside was no competition for San Diego State. Highlander duo of Kevin Griffin and Marcus Vizcarra fought hard against their opponents Hunter Nicholas and Thorsten Bertsch but lost the match 8-2.

Next up for the Highlanders were Luis Gastao and Calvin Ngo. They faced off against Aztecs Derek Siddiqui and Andranik Khachatryan. They didn’t do any better than their teammates as they went on to lose 8-1.

The singles action for the Highlanders gave more problems for San Diego but the Aztecs were too much for Riverside. Kelly Dickson for Riverside was the only player to take his opponent to three sets. Dickson went up against SDSU Shiva Sangwan and lost the first set 6-1, then won the second set 7-6 (6) before falling 10-7 in the tiebreaker.

Highlander Jimmy Roberts fell 6-1, 6-2 to Aztec Siddiqui. Highlanders Julian Ruffin and Ngo both fell to their opponents 6-1, 6-3. Highlander Gastao lost to Nicholas 6-2, 6-1. Lastly for Riverside was Griffin who challenged Aztec Spencer Simon but would go on to lose first set 7-5 and then the second set 6-0.

After facing San Diego State, the UC Riverside men’s tennis team traveled to Fresno State for their second consecutive non-conference matchup. They were searching for their first win this season but their hopes were crushed when they were unable to get past the Bulldogs losing 1-6.

In doubles action for Riverside Kevin Griffin and his partner Marcus Vizcarra was defeated by Reid deLaubenfels and Nikolas Papic 8-3.  The duo of Julian Ruffin and Calvin Ngo fought hard against Fresno State’s Sam McNeil and Jeremy Quiroz but fell 8-5. The two duos that lost for Riverside gave the Bulldogs a 1-0 advantage.

The single matches for the Highlanders were better than their doubles but Fresno State showed their composure as the Bulldogs finished three matches quickly out of the five to gain enough point to earn their 6-1 victory.

The three losses by Riverside in the single matches were enough points required for the Bulldogs to earn the win.

Some matches that should be noted for the Highlanders are Ruffin’s match and Luis Gastao’s. Ruffin won his first set against Quiroz and lost the second 6-4 but was unable to finish the third set. Then Highlander Gastao was beating his opponent Sai Kartik Nakireddi 7-6 (7-5) but by that time Fresno had already sealed the victory.

The Highlanders have about two weeks before they head to Nevada Vegas Feb. 1-3 for three  games in three days. Their first opponent is against New Mexico state Friday, Feb. 1.