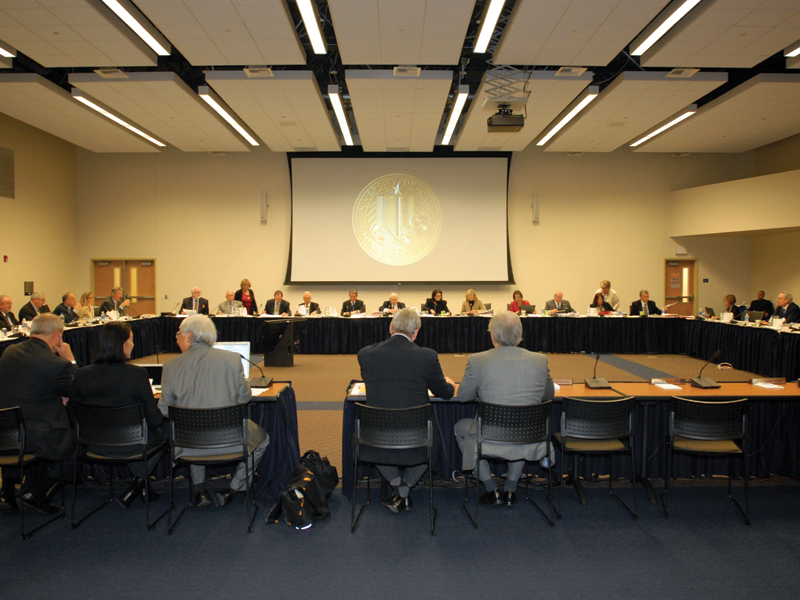 The UC Board of Regents reconvened for their bi-monthly meeting Jan. 15 to 17 at UCSF Mission Bay. Continuing discussions included the positive trajectory of state funding, degree of systemwide faculty diversity, expansion of online education and student health care.

In the week prior to the meeting, Governor Jerry Brown released his proposed 2013-2014 state budget report, which provided the UC with $125 million of additional funds—$10 million of which is designated to the development of new technologies and online courses.

The state budget assumes additional state funds of $125 million or a 4 to 5 percent increase over the next four years. Yet, this is less than half of the $265 million that the regents requested in November to forego tuition increases for the following year.

Notably, Governor Brown and Assembly Speaker John Pérez (D-Los Angeles) made rare appearances at the regents meeting on Thursday. Placing a strong emphasis on stable levels of undergraduate tuition, they challenged the regents to cut down on what they viewed as internal “inefficiencies” and increased efforts to expand on technological advances.

“Today we have the opportunity to focus not just on the nitty gritty economics, but to focus our discussion instead on how we deliver quality education services to our students and how we might perform that deliver service to better meet the needs of the students and also to do so more efficiently,” stated Yudof, at the onset of the three-day meeting.

UC Academic Senate Chair Robert Powell introduced the topic of online education, through which he described as “dynamic” advances in an undergraduate learning environment. The designated funds of $10 million from the state will ensure the continual pursuit of technological advances and online education.

Encouraging the room to keep an open mind, Regent Sherry Lansing added that the three-year expansion of online courses was initiated as a pilot program in early 2011.

Yet, many questioned the UC’s “money-generating” approach for a widespread online curriculum, while maintaining the affordability of a UC education.

“Students want to be clear that we support online education as long as it is used to supplement, not substitute, our in-person courses,” stated UCSA President Raquel Morales, who argued for the preservation of a high-quality UC education.

Discussions revolved around an expanded course curriculum and online catalog for UC Online—the systemwide program which allows students to enroll in online courses for credit. Since it was first launched in Jan. 2012, UC administrators expected a large influx of non-UC student enrollment. In the last year alone, nearly 1,700 UC students enrolled in 13 online classes last year, with only one non-UC student. Due to the lack of overall public interest, UC Online experienced a marketing loss of $5 million.

Delivered by UC Provost Aimee Dorr, the fourth Annual Accountability Sub-report on Diversity received backlash for lacking “substance” in faculty data and the regents recommended measuring the progress of each specific campus and systemwide programs to create clear goals.

To analyze the diversity of UC faculty, the committee on educational policy—established by President Yudof-—took into account academic policies, the data collection of faculty recruitment, the president’s postdoctoral program for diverse, underrepresented scholars in the areas of science, technology, engineering and mathematics (STEM).

Self-reported information among faculty included race, ethnicity, gender and national origin, yet only culminated in an overview of annual systemwide data, which a few regents viewed as interesting numericals that lacked a sense of purpose.

Regent Monica Lozano expressed her frustration over the data collection, which did not explain enough about its impact on campus climate. “So if we’re just looking at a number, as opposed to how this translates to the experience on campus, I just don’t feel like we’re getting to the objective [of achieving greater diversity].”

“In a state where over 50 percent of the students graduating from high school are chicano or latino and to have a faculty that is roughly 5 percent chicano or latino, we ought to be embarrassed about that,” expressed Regent Eddie Island, who was irked that the data did not present a sense of urgency for hiring a more diverse faculty.

“Most students don’t know about the caps until it’s too late and then when they’re seeking life-saving care, they’re confronted with the situation where the care they might need, might not be covered,” stated Eaton. Through a collection of 5,000 surveys by UCSA, most students supported the removal of the cap on health benefits.

Other health-related issues involving the loss of staff positions, which reduces the quality in patient care. “I work at San Francisco General Hospital and I see greater increases in our demands all the time,” speaker Margarita Tempero. “Yet at UCSF I heard they’re eliminating 300 full-time positions. This really impacts patients.”

Lenz and Brostrom reported a four-prong plan through way of state funding, the driving down of administrative costs and shifting resources to the academic sector, maintaining alternative revenue sources and cementing stable tuition levels for students.

“We do believe and feel strongly that we will be able to produce a plan which is a balanced budget that funds most of our expenditure needs without a tuition increase,” stated Lenz, who  emphasized the need for debt restructuring. Approval for the process is still pending from the state’s Legislative Analyst Office.

Due to the fiscal uncertainty, the university still faces the challenges of energy-related costs, increasing student enrollment and the regular maintenance of facilities. At the same time, Lenz expressed the appreciation for the governor and his dedication to Prop 30, which temporarily spared the UC from undertaking any further reductions for the current academic year.

“So clearly with the passage of Prop 30 and with the framework that the governor has provided in his budget, we see some relief, in this regard, to do some long term planning and I think that is as significant as the kind of funding…in the years to come,” stated Lenz.

In addressing the Board of Regents, Pérez said that the solution to increasing costs did not lie with increasing tuition and that failure for the regents to take this into account would lead to faltering state support. Brown emphasized the need for “fiscal discipline” through means of unit caps and expedited transfer rates—all of which was included in his state budget.

“The reality is over the last several years, we’ve made roughly $900 million dollars in cuts and you’ve increased fees by $1.4 billion dollars,” said Pérez. “Fee increases were disposition to the level of disinvestment from the state resuscitated by the gravity of the financial crisis.”

With a high likelihood for increased professional degree supplemental tuition (PDST)—an additional fee atop of graduate tuition—Pérez said that graduates may be “hamstrung” by mounting debt and the regents needed to be more “mindful” of higher education costs.

Governor Brown sought to address the “inefficiencies” in the university system through lower instructional costs, incentives for increased graduation rates, support for the expansion of technologies and a more detailed analysis of costs.

His proposed state budget enacts a 255 unit cap for UC students, in which subsidized-tuition would no longer be provided by the state. In an earlier statement by President Yudof, tuition revenue covered only 38 percent of the $900 million cuts to the UC within the last five years. Spending cuts in facility hours, faculty and staff employment, and reductions in class sizes made up for the rest of the 62 percent.

“The only way to stop [tuition increases] is for colleges and universities to reconfigure themselves so that they are more effective and they are able to do excellent work but do it in a way that will not keep the costs escalating at more than two times the cost of living,” stated Brown.