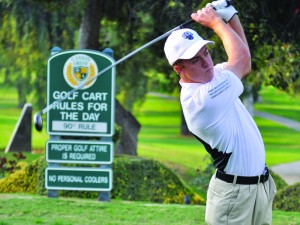 The UC Riverside men’s golf team finished 12th out of 15 teams in the Arizona Intercollegiate at the Vistoso Golf Club Jan. 28-29.

The Highlanders shot 308 in the first-round and finished the second-round with 302, dropping them to the bottom in 15th. A strong push in the third-round with 290 and the team was able to move up three spots for a 12th place finish with the combined score of 900.

Highlander David Gazzolo finished three above par (+3) with a score of 74. In rounds 13, 14 and 16 Gazzolo recording a bogey.

Christian Rajcic for UCR finished the tournament one under par (-1) with a score 70. Rajcic got off to a great start in round 14 by chipping in an eagle.

UCR Ryan Smith started off well by hitting his first birdie at the 18th hole and picked up his game in holes one through nine when he fired five more birdies in rounds two, four, five, six and seven. Smith was five under par (-5) after the seventh hole but two double bogeys at the end pushed Smith’s score to even par (E) with the score of 71.

Highlander Jason Semthiti was consistent throughout the tournament and stayed even par (E). However, two double bogeys by Semthiti ended up being too much for the Highlander. He was unable to dig out of the hole as he finished eight over par (+8) with a score of 79.

Bradley Fox started off the tournament well but shot a couple bogeys and a double bogey. Fox was able to gather himself when he responded with a birdie in round seven and then again in round 10 to put himself three over par (+3). However, Fox would later shoot a bogey in round 12 and he finished the tournament four over par (+4) with a 75 total score.

With their performance, the Highlanders’ demonstrated their willingness to compete even when things don’t go their way.  Coach Eric Riehle was asked about the team’s play at the Arizona Intercollegiate. “The positives from this early season spring event is that throughout the tournament we were able to improve both individual and team rounds while moving up the leaderboard,” said Coach Riehle.

“In one of our toughest fields of the year we were able to record some quality wins over key opponents, including Pac-12 member University of Utah,” Coach Riehle continued.

On his plans are for the team’s next match, Coach Riehle said, “I’m looking forward to our upcoming events. We will be spending time working on individual weaknesses that we noticed at Arizona, with a main team focus on short game.”

“The next three courses that we are playing will be difficult setups that demand toughness around the greens,” Coach Riehle said.

Riverside’s next match is Feb. 8 at home against Western Illinois.