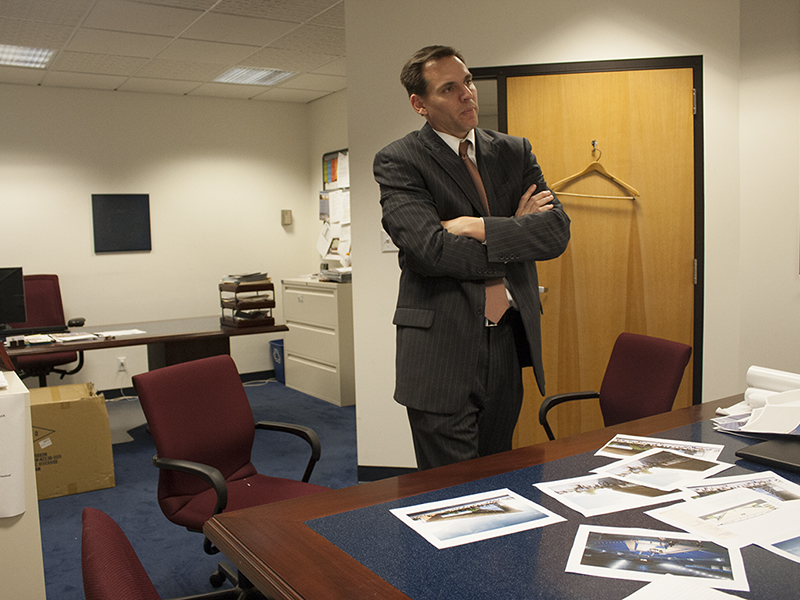 Brian Wickstrom will celebrate his 600th day as the UC Riverside athletics director later this month. Since taking over for Stan Morrison, Wickstrom has overseen the development of numerous projects on campus. Fan attendance has soared, facilities have been renovated and his goal of constructing the brand new C-Center is well within reach.

But numbers aside, Wickstrom has also been instrumental in changing the look of UCR athletics. Last year, he led a campaign to redesign the logo of UCR sports in hopes of creating a “brand identity” that would make the department more recognizable. In addition, the department has also made renovations to numerous facilities on campus. The track and field stadium was renewed, the soccer stadium also received upgrades and the renovations to the Physical Education Building are well underway.

In an interview with the Highlander, Wickstrom talked about the success he has had, the people who influenced his work and the development of UC Riverside’s facilities—namely the construction of the long-sought-after C-Center.

After months of planning, the project of the C-Center now appears to be a realistic possibility. According to the Wickstrom, the development of the proposed arena has generated a lot of momentum in the past few months. The long list of supporters includes the dean of the UC Riverside Extension Sharon Duffy, former UCR Chancellor Timothy P. White, current Chancellor Jane Conoley, members of the city council of Riverside and UCR students.

When the Highlander last spoke to Wickstrom, the C-Center was still in the early phases of development. Now the project is starting to come together and new details have emerged about its progress. According to Wickstrom, the city has given the university clearance letters, informing them the site where the arena will stand has been approved for construction. The sewage system may need to be adjusted, Wickstrom noted, but the power lines for the center have all been cleared and are good to go for construction.

Wickstrom says that he wants the arena to include anywhere between 5,000 to 6,700 seats. As he put it, he wants to make it big enough for people to show up, but not too big where empty seats will be glaringly obvious. “We don’t want it to be too big,” he said. “It won’t be this big, empty arena like the Citizen’s Business Bank Arena.”

Wickstrom assured that the university will not use any student fees or state money to complete its construction. “This will be from philanthropic fundraising, from sponsors and from people that want to see this project work,” he said.

He went on to detail the enthusiasm people have showed about the center. “I get endless phone calls from people excited to have an arena on campus,” he said. “I haven’t gotten any negative feedback from anybody. Everybody’s been jumping on board for this project.”

The group most excited about the changes at UCR appears to be the students. Hylander Hype, the student-run organization devoted to increasing fan attendance spoke with the Highlander last week and offered its input on the project.

“The C-Center could make money not only in athletics, but in general,” said Hylander Hype Vice President Josh Zozaya, referring to the numerous events that the arena could potentially hold. According to Wickstrom, these events not only include sports games; the facility will be able to accommodate commencement, convocations, concerts, and even circus performances.

Riverside student-athletes are also on board. They emphasized the need for more fans at sporting events and they feel that the C-Center can provide that.

“If the atmosphere changes, that would make a difference,” said UCR men’s basketball player Austin Quick.

Student involvement has been a major concern since upgrading to Division I. In 2011, Stadium Journey, a website that reviews college facilities gave UCR’s SRC Arena poor reviews. It condemned the fan attendance, the atmosphere, the return investment and the food and beverage availability of the arena.

“Honestly, I don’t disagree with the ratings,” Wickstrom commented. “Now that UC Riverside is in Division I, I think there’s a certain standard. The Student Rec Center is a good place to play temporarily. When visiting teams walk in there or students come in there, we lose credibility as a Division I program…This arena will help make this [school] be a legitimate Division I program… The whole student experience will be unbelievable,” he assured.

He added that the development of the center is a product of the collaborative work of the many people involved in the project. “Our department has made a lot of progress because we have great people in positions working together,” he said, “not just one person.”

Wickstrom’s work and impact have not gone unnoticed. Over the past few months, he has received local and national recognition for the work he has put in.

Mike Alden, one of the mentors Wickstrom mentioned, also spoke about the changes UCR’s athletics director has made. “The many traits exhibited by Brian professionally and personally are a huge asset to UC Riverside,” Alden said. “It doesn’t surprise me that Brian has made an immediate impact.  It also wouldn’t surprise me to see these initial successes for the Highlanders continue well into Brian’s tenure.”

“I actually have really noticed [the changes],” said Duffy, a long-time member of the UCR community. “I’ve noticed many more students wearing UCR gear. I don’t remember noticing that until the last few years.”

Wickstrom hopes to get the C-Center up and running by the start of the 2015 basketball season. As previously noted, it will include up to 6,700 seats, it will cost as much as $90 million and it will be built in the area that is now the Bannockburn Village. The athletics director also added that despite the new and expensive state-of-the-art arena, tickets to the sporting events will remain free for students.